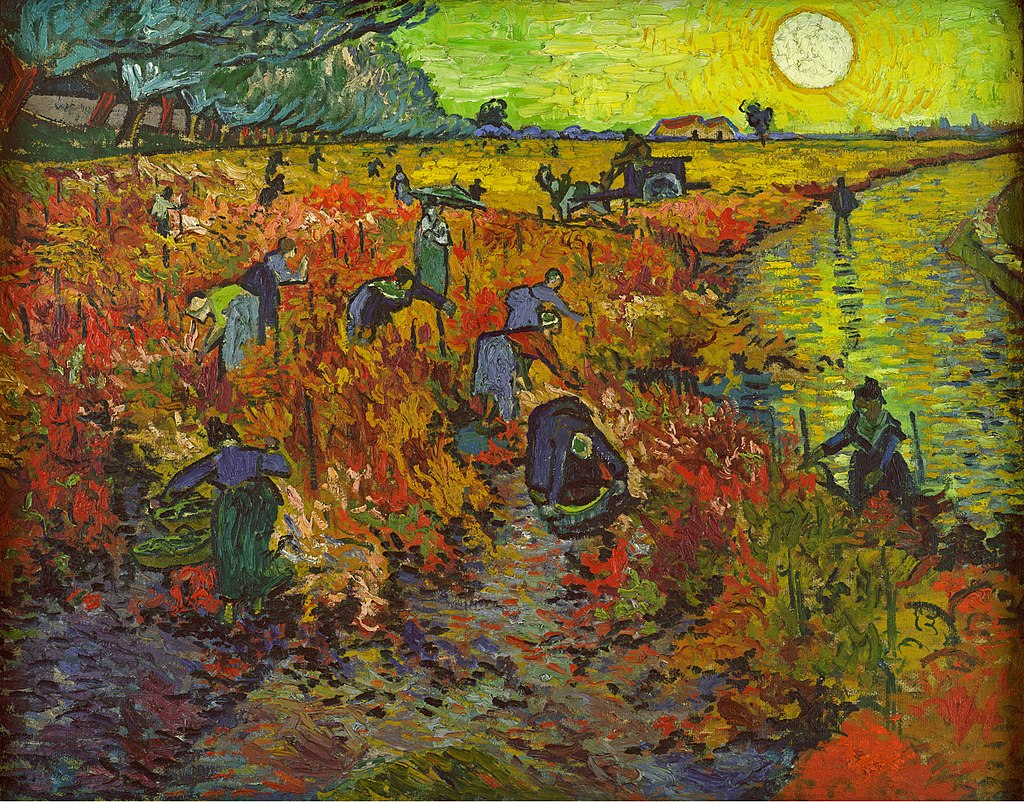 “The Red Vineyard” by Vincent van Gogh depicts workers in a vineyard, and it is the only painting van Gogh sold during his lifetime. Van Gogh uniquely captured the mellowed tones and glistening light of the evening sun reflecting in the river and the autumn fields.

This painting was painted two weeks after Gauguin arrived in Arles and moved in with Van Gogh. Van Gogh was excited by his idea of starting an artists’ colony. He was keen to share his studio with Gauguin.

The two artists had met two years previously, and Van Gogh was in awe of Gauguin. The relationship, however, ended in disaster culminating in Van Gogh’s self-mutilation.

However, before this incident, the two artists worked on similar projects, and Gauguin influenced Van Gogh’s paintings of this time. The Gauguin’s colorful works inspired Van Gogh to use more colors for this painting, which he continued to do in his later works.

Van Gogh painted this canvas, while Gauguin was painting scenes with Breton Women, clothed in the traditional costumes.

Van Gogh was particularly delighted with a vineyard, whose colors were turning to autumnal reds and yellows.

“I have to go to work in the vineyard, near Mont Majour.
It’s all purplish yellow-green under the blue sky, a beautiful, color motif.”

Van Gogh While created this painting at the Yellow House from memory and his imagination, the day after, he walked through the nearby wine fields, near Montmajour Abbey during the grape harvest.

Van Gogh depicted the vine harvest with the sun in a yellow sky. The sunlight radiates the landscape, with the gold-colored river and the vine leaves of the painting flashing red.

The people picking vines, mainly dressed in blue, are working in the vineyard. The workers in the background are depicted as silhouettes.

The figures of people bringing in the harvest were a symbol of life, which is presented by Van Gogh as daily toil.

A row of blue and green trees in the background leads to the farmhouse. Van Gogh has used diagonal lines that move from the sun and its horizon to the bottom left of the painting guided by the river and the row of trees.

“The Red Vineyard” was exhibited for the first time at the annual exhibition of Les XX, 1890 in Brussels, and sold for 400 Francs equal to about $2,000 today.

The painting was later purchased, in 1909, from a Paris art gallery by Ivan Morozov. After the Russian Revolution, the picture was nationalized by the Bolsheviks and eventually passed to Moscow’s Pushkin Museum of Fine Arts.

Vincent van Gogh’s participation at Les XX, 1890, in Brussels, was an important testament to the recognition he was beginning to receive amongst avant-garde peers during his lifetime.

Participation in the annual exhibition of Les XX was for members and by invitation only. Van Gogh’s choice of paintings to exhibit represents what he considered superior, and an overview of his years of work in Provence.

However, two days before the opening of the exhibition of Les XX,  Henry de Groux announced that his artworks would not be seen side by side with the:

“abominable Pot of Sunflowers by Monsieur Vincent or any other agent provocateur.”

At the opening dinner, De Groux once again attacked Van Gogh’s paintings and called him:

“an ignoramus and a charlatan. At the other end of the table, Lautrec suddenly bounced up,
with his arms in the air, and shouted that it was an outrage to criticize so great an artist.
De Groux retorted. Tumult. Seconds were appointed.
Signac announced coldly that if Lautrec were killed, he would assume the quarrel himself.”

That same evening, Les XX expelled De Groux from their association; the next day, he apologized and was allowed to resign. Thus the duel was averted, and Paul Signac was soon one of two supplementary members elected to Les XX.

In November 1889, Van Gogh selected six of his paintings, to be displayed at Les XX, in 1890, he also supplied the titles. The paintings were:

The Red Vineyards near Arles By Van Gough