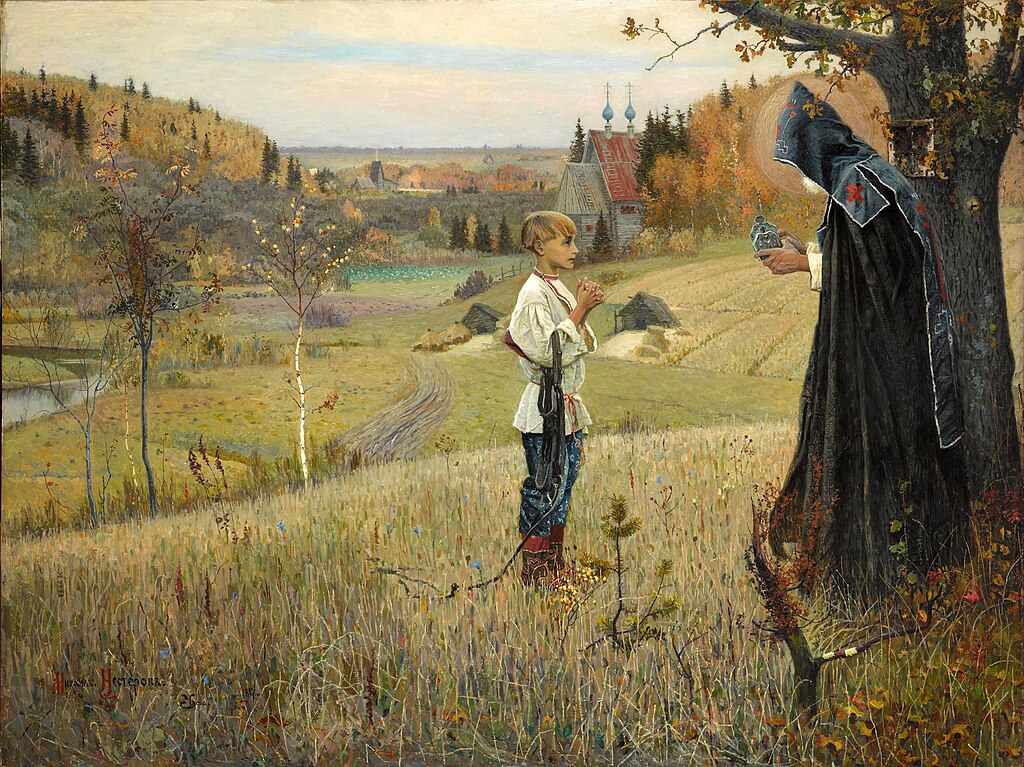 “The Vision to the Youth Bartholomew” by Mikhail Nesterov

“The Vision to the Youth Bartholomew” by Mikhail Nesterov was the first work in the artist’s series on Saint Sergius of Radonezh, a medieval Russian saint.

The painting illustrates a famous episode from the life of the saint as a young boy whose baptismal name was Bartholomew. Bartholomew was an intelligent boy; however, he had great difficulty learning to read.

His biography states that a spiritual elder met him one day and gave him a piece of prosphora (holy bread) to eat, and from that day forward, he was able to read. Orthodox Christians interpret the incident as being an angelic visitation.

The painting depicts the day when the boy was sent by his father to look for a lost foal. On his way, he met a monk, who was standing beneath an oak tree, praying devoutly.

The boy, seeing the stranger, humbly waited for the end of his prayers. The monk then blessed the boy and asked him what he was seeking.

The boy answered that his desire was to learn to read and study the Holy Scriptures. The monk prayed for the boy’s request and offered the boy the leavened bread used in Russian liturgies.

The landscape was conceived in 1899 and is modeled on a village near Radonezh and one of the artist’s favorite places.

The stories of St. Sergius were a significant influence on the artist since his childhood, and embodiment the moral ideal for Nesterov. Until the end of his life, the artist was convinced that this painting remained his best work. In old age, the artist used to say:

“I won’t be the one who lives. “Youth Bartholomew” will. If in thirty, in fifty years after my death, he will still be telling people something – that means he is alive, which means I am alive.”

The painting is considered “the inaugural work of the Russian Symbolist movement”.

Russian symbolism was an artistic movement predominant at the end of the 19th and beginning of the 20th century.

The symbolist painters used mythological or religious imagery depicted in a dreamy and imaginary world.

More a philosophy than an actual style of art, symbolism in painting influenced the contemporary Art Nouveau style and Les Nabis.

Sergius of Radonezh (1314 – 1392) was a spiritual leader and monastic reformer of medieval Russia. He is one of the Russian Orthodox Church’s most highly venerated saints.

St. Sergius founded monastic communities in Moscow, and his disciples went on to found about 40 monasteries, substantially extending the geographical extent of his influence and authority.

However, when Metropolitan, a leader of the Russian Church asked him to become his successor, Sergius declined, preferring to remain a simple monk.

Sergius died in 1392 and was canonized in 1452. The Catholic Church officially recognizes Sergius as a saint, and he is honored in the Calendar of Saints of several churches of the Anglican Communion.

Mikhail Vasilyevich Nesterov (1862 – 1942) was a Russian and Soviet painter. He was one of the first exponents of Symbolist art in Russia.

The Vision to the Youth Bartholomew

A Tour of the Russian Museum