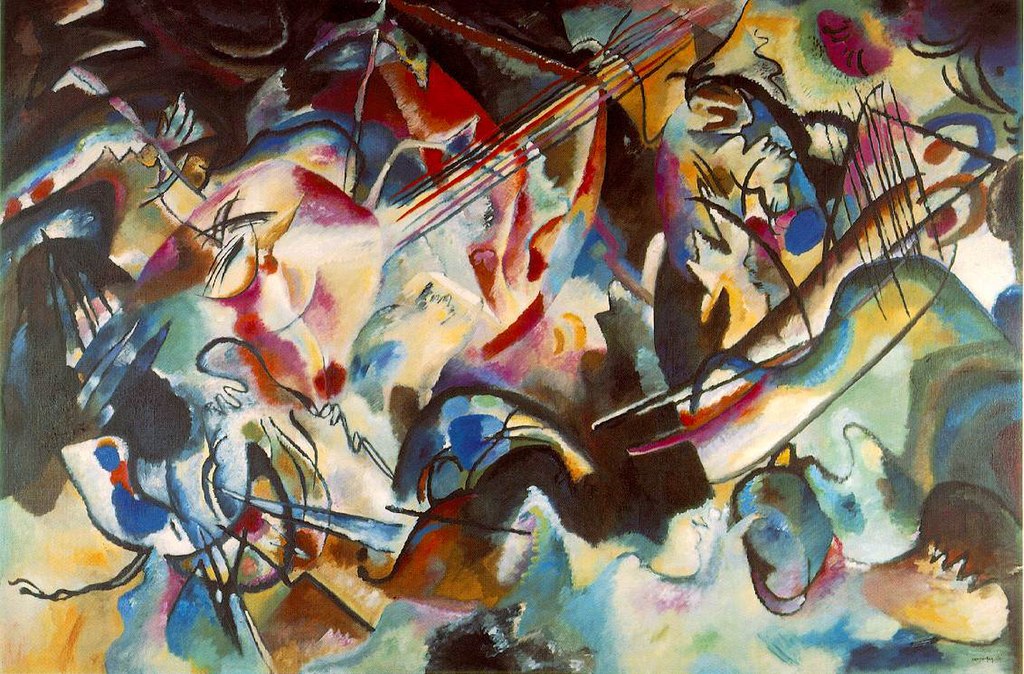 Composition VI by Kandinsky by Vasily Kandinsky also spelled Wassily, is an expressive abstract that is independent of forms and lines.

Music was an essential catalyst for early abstract art, and Kandinsky used musical terms to identify his works.

He called his spontaneous paintings “improvisations” and described elaborate works, such as this painting, as “compositions.”

In many of Kandinsky’s works, the identification of the forms and the masses present on the canvas require a more elaborate analysis.

Kandinsky was an early champion of abstract painting; he is famous for his lyrical style and innovative theories on nonfigurative art.

Kandinsky spent nearly six months preparing and procrastinating in the creation of this painting. He initially intended the work to evoke the idea of a flood, destruction, and rebirth.

However, Kandinsky was overcome by an uncharacteristically long artistic block.

His breakthrough came when he started repeating the word “uberflut,” meaning “flood” or “deluge,” and focusing on the sound of the word rather than its meaning.

With this technique, he released his mind to focus on the music of the word, and Kandinsky was able to complete the painting in three days, all the while repeating the word “uberflut,” like a mantra.

The painting comprises a collage of semicircles, twisting lines, and vibrant colors. Countless overlapping amorphous forms are spreading out like waves lit up by lightning flashes and soaked in rainfall. In May 1913, Kandinsky wrote about this painting.”

“This picture I was … in mind for one and a half years. And often, it seemed to me that perhaps I would not achieve it.
The point of departure was the Deluge …
Here different objective forms are given, which are sometimes…  nudes, the ark, animals, palms, flashes, rain, etc.”

What can you see in this Kandinsky painting?

Wassily Kandinsky is credited with painting one of the first recognized purely abstract works. Born in Moscow, he studying law and economics and began painting studies at the age of 30.

Kandinsky was unsympathetic to the official theories on art in Communist Moscow and moved to Germany in 1920.

There, he taught at the Bauhaus school of art and architecture from 1922 until the Nazis closed it in 1933. He then moved to France, where he lived for the rest of his life, becoming a French citizen in 1939 and producing some of his most prominent art.

Abstract Art is not just an invention of the modern world; it has existed in the art of earlier cultures.

Markings and designs on pottery, domestic and luxury goods, building structures as well as paintings on rocks have used geometric and linear forms which had a symbolic or decorative purpose.

It is at this level of visual meaning that abstract art communicates. We can enjoy the beauty of calligraphy from many cultures without knowing how to read the language.

In modern art, there has been an explosion of art movements created; each has been defined and categorized.

Each of these Abstract Art categories is identified by their visual language and their degree of independence from their non-abstract references.

“Each color lives by its mysterious life.”
– Wassily Kandinsky