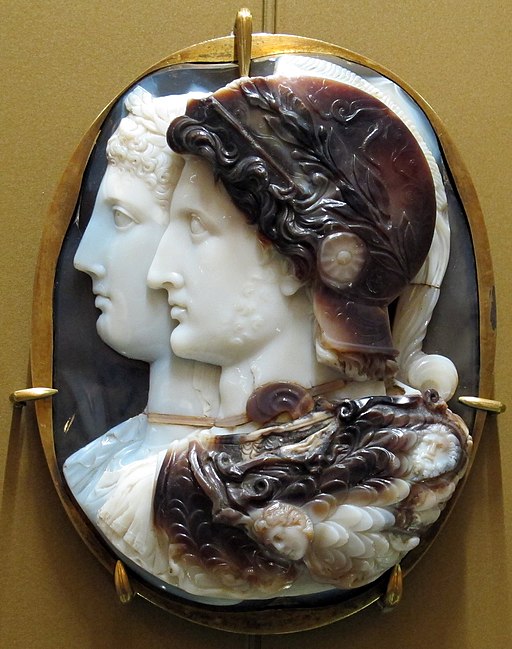 The Gonzaga Cameo is a Hellenistic engraved gem dating from the 3rd century BC. The two profiles form a couple who at various times have been identified as Alexander the Great and Olympias, Germanicus and Agrippina the Elder, Nero, and Agrippina the Younger, and many other famous couples of antiquity.

The male figure is clad in the attributes of Alexander. These attributes include a laurel-wreathed helmet which is crowned by a snake. The Alexander figure also has on his cape a gorgoneion figure and a bearded head, probably that of Zeus Ammon. The brown necklace is a later addition to mask the fact that the cameo was, at some point, broken in half at the necks of the figures

A Cameo is carved engraved gem with a raised positive relief image. In historical works, cameo refers to works where the relief image has a contrasting color to the background. The contrast is achieved by carefully carving a piece of material where two different colors. By removing sections of the first color, an image is left standing out with a contrasting colored background. The Gonzaga Cameo was cut out from the three different colored layers of Indian sardonyx.

The cameo shows the profiles of a man and a woman representing a type of portrait, showing two superimposed profiles. This motif was first used on coins issued by Ptolemy II Philadelphus in Hellenistic Egypt, with portraits show Ptolemy with his wife. It was in the Egyptian court that the image of the twin deities gained currency.

Adventures of a Gem

The Gonzaga Cameo was a centerpiece of the Gonzaga collection of antiquities, first described in a 1542 inventory of Isabella d’Este’s collection as representing the couple Augustus and Livia. The House of Gonzaga was an Italian princely family that ruled Mantua, in northern Italy, from 1328 to 1708.

During the War of the Mantuan Succession, the gem was carried off by the imperial troops to Vienna and was preserved in the Prague Castle treasury. At the end of the Thirty Years’ War, the Swedes marched into Prague and looted the imperial treasury.

The cameo resurfaced several years later in the collection of Queen Christina of Sweden. It was later acquired, with the rest of Christina’s art collection, by the nephew of Innocent XI. In 1794 the cameo was part of Pius VI’s collection in the Vatican.

During the Napoleonic Wars, the invading French took it with them to Paris where the Gonzaga Cameo entered the collection of Napoleon and Empress Joséphine. After Napoleon’s downfall, Alexander I of Russia paid a visit to Joséphine and offered her assistance. As a sign of gratitude, she presented the cameo to the Tsar. Since then, the cameo gem has been kept in the Hermitage Museum in St. Petersburg.

The Controversy of a Gem

In Vienna, there is another rival Hellenistic cameo, which the Habsburgs also described as the “Gonzaga Cameo.” They claimed that Gonzaga Cameo had not been stolen by the Swedes in 1648, and had remained in Vienna. This disputed claim has resulted in much confusion between the two cameos and increased the fame of both gems.

The House of Gonzaga was an Italian princely family that ruled Mantua, in northern Italy, from 1328 to 1708. They also ruled Monferrato in Piedmont and Nevers in France and many other lesser fiefs throughout Europe. Their family includes a saint, twelve cardinals and fourteen bishops. Two Gonzaga descendants became empresses of the Holy Roman Empire, and one became the queen of Poland.

The House of Gonzaga is the inspiration for the play-within-the-play in Shakespeare’s Hamlet. In Act 3, scene 2, they act out a play called The Murder of Gonzago.

The word Sardonyx is derived from the Greek, sard meaning “reddish-brown,” and onyx meaning “veined gem” and is used to refer to onyx, an oxide mineral, where white layers alternate with sard (shades of red). Sardonyx has a long history of use for hardstone carving and jewelry, where it is usually cut as a cabochon or into beads. It has also been used for intaglio and hardstone cameo engraved gems, where the bands make the image contrast with the ground.