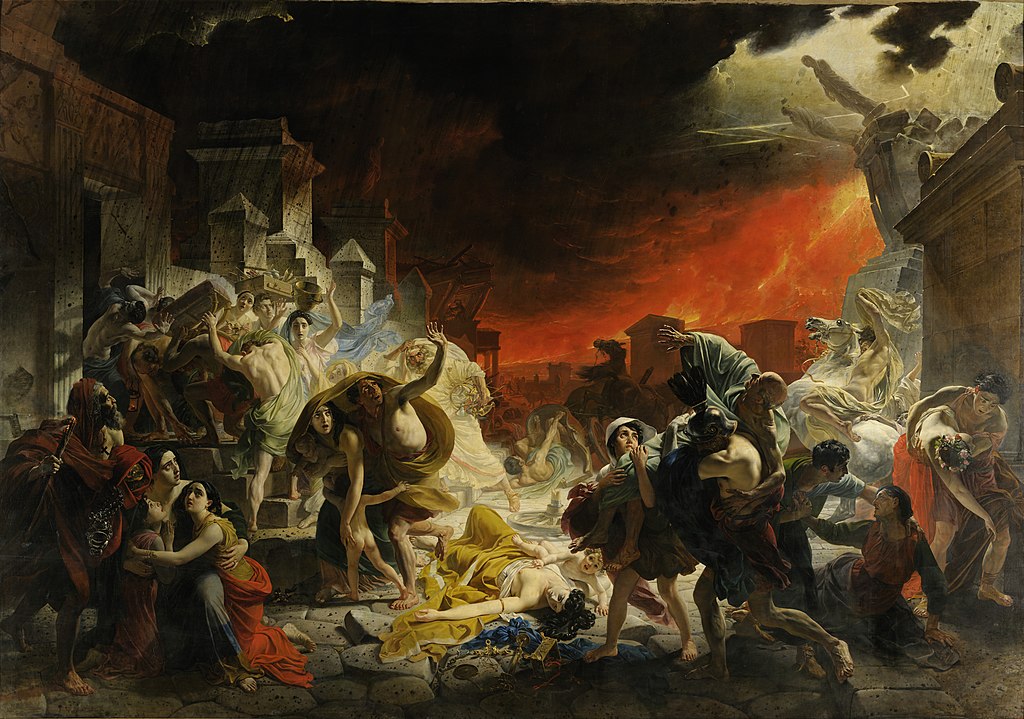 “The Last Day of Pompeii” by Karl Bryullov

“The Last Day of Pompeii” by Karl Bryullov depicts the volcanic ash and pumice from the eruption of Mount Vesuvius in AD 79 that inundating inhabitants.

Those who did not escape the lethal effects of the earthquake and explosive eruption were buried in over 4 m (13 ft) of volcanic ash.

Pompeii was an ancient Roman city near modern Naples. The Roman town of Pompeii, along with Herculaneum and many villas in the surrounding area, were buried in volcanic ash.

Briullov visited the partially excavated Pompeii in 1828 and made sketches depicting “The Last Day of Pompeii.”

This painting received positive reviews and praise at its exhibition in Rome and brought Briullov significant acclaim.

It was the first modern-era Russian artwork to cause such interest abroad, and it inspired a poem by Pushkin.

The town of Pompeii was preserved under the ash for nearly two thousand years. Following its rediscovery, excavations revealed the remains of an ancient city that offers a snapshot of Roman life, frozen at the moment it was buried.

Organic remains, including wooden objects and human bodies, were interred in the ash and decayed away, making natural molds; and excavators used these to make plaster casts.

Herculaneum was rediscovered in 1738 by workmen digging the foundations of a summer palace for the King of Naples.

The Spanish military engineer then undertook excavations to find further remains, discovering Pompeii in 1748. The first serious excavations followed in 1764.

An unknown number of discoveries were hidden away again. A wall fresco was covered with plaster. A large number of artifacts from the buried cities are preserved in the Naples National Archaeological Museum.

The Naples “Secret Museum” was finally re-opened for viewing in 2000. Minors are still allowed entry only in the presence of a guardian or with written permission.

Karl Pavlovich Bryullov (1799 – 1852) was a Russian painter, who is considered as critical in the transition from the Russian neoclassicism to romanticism. Bryullov was born in St. Petersburg; his father was of Huguenot descent.

During his early years as an artist, he left Russia for Rome, where he worked until 1835 as a portraitist and genre painter. However, Bryullov’s fame as an artist came when he began creating historical paintings.

After returning to the Russian capital, he made many friends among the aristocracy and intellectual elite and obtained a high post in the Imperial Academy of Arts.

While teaching at the academy, he developed a portrait style that combined a neoclassical simplicity with a romantic tendency. His penchant for realism was satisfied with an intriguing level of psychological penetration.

When his health suddenly deteriorated, following the advice of his doctors, Bryullov left Russia for Madeira, Portugal, in 1849 and then spent the last three years of his life in Italy. He died near Rome.

The Last Day of Pompeii

A Tour of the Hermitage Museum

Composition 20 The Last Day of Pompeii by Karl Briullov

The Last Day of Pompeii Animated

The Last Day of Pompeii

“Many sought the aid of the gods,
but still more imagined there were no gods left,
and that the universe was plunged into eternal darkness forevermore.”
– Pliny the Younger