The “Princesses Fresco” depicts the informal theme of palace life at the new capital city called Akhetaten, built by pharaoh Akhenaten. At the new city, the king lived with his queen, Nefertiti, and their six daughters in a newly decorated Royal Court.

The larger fragment of the wall painting depicted Akhenaten and Nefertiti relaxing with their daughters. This small fragment shows the two Princesses sitting casually on floor cushions in the foreground.

The princesses, following an ancient tradition, are represented with shaved heads. Some ancient royal skulls have been found with elongated shape but not to such a degree or shape depicted in this fragment.

Some skull bandage was practiced and the mummy of Tutankhamun shows that his skull was slightly deformed. The princesses are reproduced with similar deformations but much more pronounced. The elongated skulls may have a theological or cultural reason such as imitating the skull of certain newborns or their father’s fashion.

The style and subject of this painting are in direct contrast to conventional Egyptian art and reflects the revolutionary character of the Amarna period.

Akhenaten was an ancient Egyptian pharaoh reigning c. 1353–1336 BC.  He was initially known as Amenhotep IV, but he abandoned Egypt’s traditional polytheistic religion and introducing worship centered on Aten.

The priests did not accept this shift away from traditional religion, and after his death, Akhenaten’s monuments were dismantled and hidden. His statues and revolutionary art were destroyed, and his name was excluded from lists of rulers compiled by later pharaohs.

His successor was Tutankhamun, who changed his name from Tutankhaten. Still, Akhenaten was all but lost to history until the late 19th century with the discovery of ancient Akhetaten, the capital city he built.

Akhenaten’s rediscovery and the excavations at Amarna sparked great public interest in the pharaoh and his queen Nefertiti. He has been described as enigmatic and revolutionary, and she as a great beauty.

This painting was made on a thin layer of gesso – powdered gypsum mixed with glue – applied to mud plaster on a brick wall.

William Flinders Petrie excavated the fresco in the 1890s at Tell el-Amarna. Ants had damaged the wall, and its preservation is a tribute to the remarkable skills of the archaeologist.

The wall may have also suffered this damage after the end of Akhenaten’s reign when there was a counter-revolution against the changes he had introduced. Images of the royal family and their monuments were destroyed, and the Royal Court returned to Thebes as the new city was abandoned.

Petrie worked on the temple of Aten at Tell-el-Amarna, starting in 1891. He discovered a 300-square-foot (28 m2), painted pavement of garden and animals and hunting scenes. 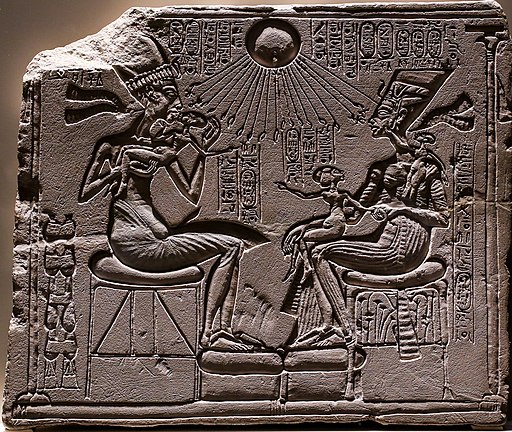 Akhenaton and Nefertiti with 3 of their daughters, under the rays of the sun god Aton – Neues Museum

Amarna and its Art

Akhenaten decreed that a new capital city be built called Akhetaten, better known today as Amarna. The pharaoh chose a site that was about halfway between Thebes, the capital at the time, and Memphis.

The styles of art that flourished during the reign of Akhenaten was markedly different from the traditional art of ancient Egypt. In many cases, representations were more realistic or naturalistic.

Akhenaten’s portrayals were unconventional with broad hips and a thin, exaggeratedly long face and thick lips.

Based on Akhenaten’s and his family’s unusual artistic representations,  some have argued that the pharaoh and his family suffered from various syndromes.

Others argued that instead for a symbolic interpretation, and that he may have directed his artists to contrast him with the ordinary people through a radical departure from the idealized traditional pharaoh image.

Akhenaten’s family are shown taking part in naturalistic activities, showing affection for each other, and being caught in mid-action.

Also, Queen Nefertiti enjoyed an unusual status for a queen. Questions remain whether the beauty of Nefertiti is portraiture or idealism. 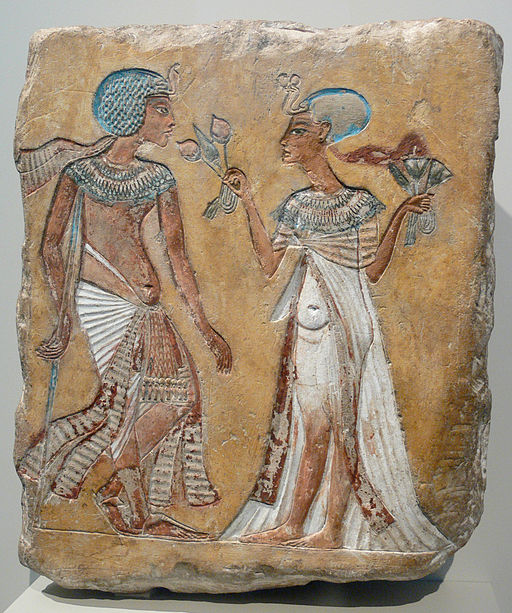 “Social good is what brings peace to family and society.”
– Egyptian Proverbs