The Alfred Jewel is an Anglo-Saxon goldsmithing work made of enamel and quartz enclosed in gold. It has been dated to the late 9th century, in the reign of Alfred the Great.

The Jewel is inscribed “aelfred mec heht gewyrcan,” meaning “Alfred ordered me made.” The Jewel was once attached to a rod at its base.

The function of the Jewel was as the handle for a pointing stick used to follow the words when reading a book.

It may be the handle for one of the precious “æstels” or staffs that Alfred sent to each bishopric along with a copy of his translation of Pope Gregory the Great’s book “Pastoral Care.”

Alfred wrote in his preface to the book:

“And I will send a copy to every bishop’s see in my kingdom,
and in each book, there is an aestel of 50 mancusses
and I command, in God’s name,
that no man take the staff from the book,
nor the book from the church.”

The mancus was a term used in early medieval Europe to denote either a gold coin or thirty silver pence. This value made it worth about a month’s wages for a skilled worker, such as a craftsman or a soldier.

No other context is given, but in the context of books, the Old English word “æstel” meant a small pointer.

Other jeweled objects with a similar form have survived, all with empty sockets. 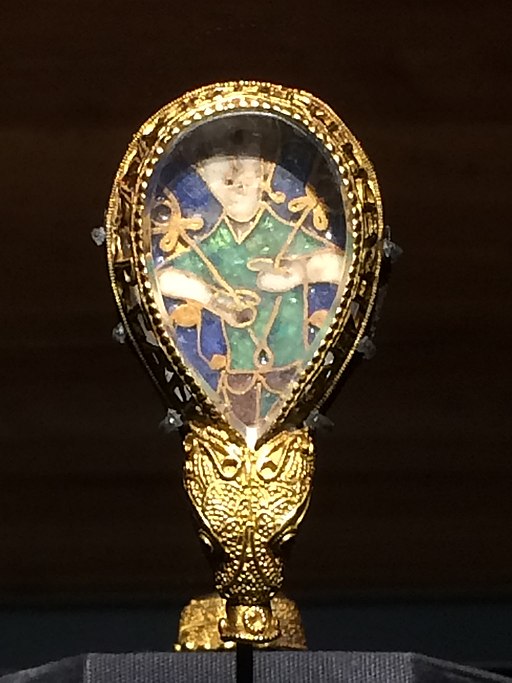 The Alfred Jewel is made of gold, enclosing a highly polished tear-shaped piece of clear quartz, beneath which is set an enamel plaque, with an image of a man, perhaps Christ, with religious symbols.

The use of a relatively large piece of enamel to create a symbolic image is an innovation in Anglo-Saxon art, following Byzantine and Carolingian examples.

Around the sides of the crystal, there is a rim at the top that holds the rock crystal in place, above the openwork inscription.

An animal head at the base has as its snout a hollow socket, indicating that it was intended to hold a thin rod. The back is a flat gold plate engraved with a plant motif or “Tree of Life.”

King Alfred’s Jewel – front, enamel, and back – Ashmolean Museum of Art and Archaeology

The Jewel was discovered in 1693 in North Petherton, Somerset, which is about 8 miles (13 km) away from Athelney, where King Alfred founded a monastery.

Various representations of the Alfred Jewel’s image have been used as an emblem or logo by several religious and academic institutions and organizations.

The Jewel’s fame has also inspired other artworks plus many references in literature and popular culture.

The Life of Alfred the Great

In Search of Alfred the Great

“The saddest thing about any man is that he be ignorant, and the most exciting thing is that he knows.”
– Alfred the Great