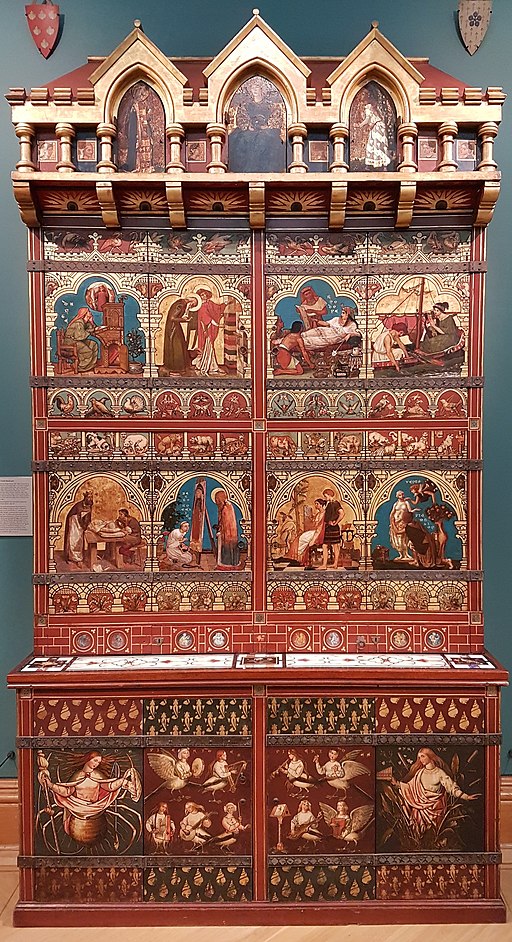 The Great Bookcase is an elaborate and highly decorated example of Victorian Gothic painted furniture. The Pre-Raphaelite paintings on the bookcase depict Pagan and Christian art expressed in allegories of poetry, music, architecture, sculpture, and painting.

Work on the Bookcase began in 1859 and was completed by 1862. The bookcase design was based on surviving medieval furniture. However, the bookcase decorations are 19th-century artwork.

William Burges (1827–81), the eminent Victorian architect and designer who orchestrated the deign, believed that, in addition to serving a practical purpose, furniture should also tell a story. The bookcase was designed by William Burges to hold his collection of art books,

The Great Bookcase is significant for its painted scenes and decoration. Christian themes are painted on the left side of the bookcase, and Pagan themes on the right.

It was decorated by fourteen Pre-Raphaelite and Victorian artists, which included: 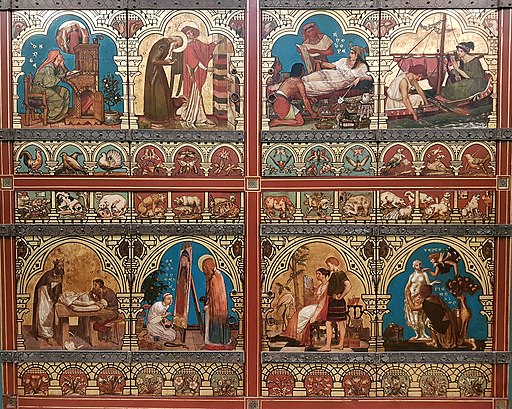 The Christian decorations include:

The Pagan decorations include:

The base of the bookcase features four metamorphosic figures, in the form of Arachne, the Pierides, and Syrinx. 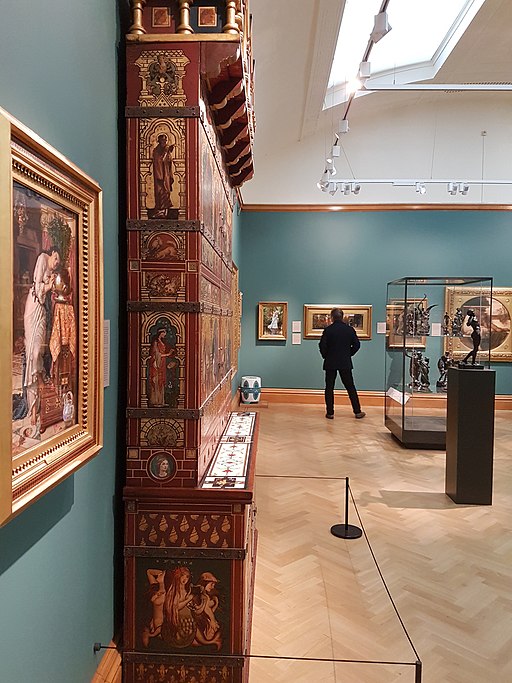 Above the front panels is a cornice decorated with muses, and surmounting the cornice are three painted gables. The three gables feature painted depictions of ‘Religion’ ‘Art’ and ‘Love.’

On the sides of the bookcase are depicted:

In 1933, the bookcase was purchased for the Ashmolean Museum by Kenneth Clark, Clark paying £50.

William Burges ARA (1827 – 1881) was an English architect and designer. Among the greatest of the Victorian art-architects, he sought in his work to re-establish the values of a utopian medieval England.

Burges was part of the Gothic Revival movement; his works echoed the Pre-Raphaelites and pointed to the Arts and Crafts movement.

Beyond architecture, Burges designed metalwork, sculpture, jewelry, furniture, and stained glass. The revival of interest in Victorian art, architecture, and design in the later twentieth century led to a renewed appreciation of Burges and his work.

Amazing Art and Artefacts from the Ashmolean Museum

“The saddest thing about any man is that he be ignorant, and the most exciting thing is that he knows.”
– Alfred the Great