The Messiah Stradivarius a violin made by Antonio Stradivari of Cremona, Lombardy, in 1716. It is considered the world’s most valuable violin and the only Stradivarius that is in like-new condition, as it is seldom played.

The violin remained in Stradivari’s workshop until he died in 1737. Having passed through the hands of several collectors, an experienced violinist on seeing it exclaimed:

“Your violin is like the Messiah of the Jews: one always expects him, but he never appears.”

With this recognition of the value of this Stradivarius Violin, it was baptized with the name the “Messiah Stradivarius.”

The Messiah was bequeathed to the Ashmolean Museum in Oxford for preservation as “a yardstick for future violin makers to learn from.”

The tonal potential of the instrument has been questioned because it is not played. However, it was played at least twice, once by the famous violinist in 1891, who stated that he was struck by the combined sweetness and grandeur of the sound. Also, Nathan Milstein played it before 1940 and described it as an unforgettable experience.

The violin, however, owes its great fame, not to the sounds that it makes but to the pristine condition in which it survives. It owes its condition to the fact that it has always been a collector’s piece.

It is not entirely untouched. The neck was lengthened, and the pegs, bridge, and tailpiece were added in the 19th century. The tuning pegs and the tailpiece with the Nativity of Christ scene were added by the French luthier Jean Baptiste Vuillaume.

The varnish is almost unworn, and the painted edge-work on the scroll survives intact. The Messiah Stradivarius is was worth an estimated US$20 million. 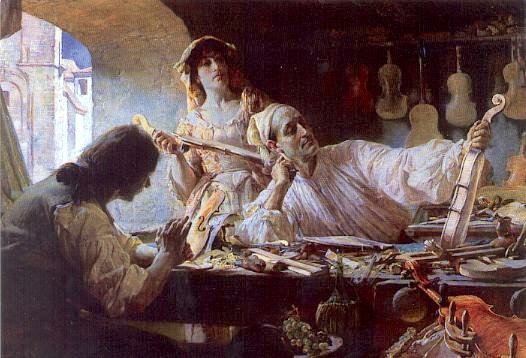 Antonio Stradivari (1644 – 1737) was an Italian luthier and a craftsman of string instruments such as violins, cellos, guitars, violas, and harps.

The Latinized form of his surname, Stradivarius, as well as the colloquial “Strad,” are terms often used to refer to his instruments.

Stradivari produced 1,116 instruments, about 650 of his instruments have survived, including about 500 violins.

Stradivari’s instruments are regarded as the finest bowed stringed instruments ever created, are highly prized, and are still played by professionals today.

Only one other maker, Giuseppe Guarneri del Gesù, commands similar respect among violinists.

Antonio Stradivari’s sons, Francesco and Omobono, continued his workshop after he died.

A romanticized print of Antonio Stradivari examining an instrument, 1921

Stradivarius at the Ashmolean Museum