The Narmer macehead is an ancient Egyptian decorative stone mace head. The mace is a club-like weapon with a heavy top stone that is pierced for the insertion of a handle, originally developed as a weapon of war.

In Ancient Egypt, the mace is the characteristic weapon of Predynastic Egypt. The mace’s function evolved to become a ceremonial object.

The Narmer Macehead was found in the temple area of the ancient Egyptian city of Nekhen (Hierakonpolis) in 1898. It is dated to the Early Dynastic Period reign of king Narmer 3200 – 3000 BC, whose heraldic crest is engraved on it.

The Narmer macehead is well preserved and has numerous engraved illustrations and markings. The designs on the Narmer Macehead have been given various interpretations. 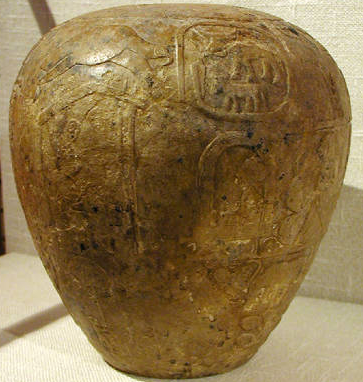 According to the custom of the time, the events depicted on Narmer Macehead record the year it was carved and presented to the temple. A ceremonial macehead’s illustration typically commemorates significant events such as military victory, a festival, or a marriage.

The engraved image shows a king sitting under a canopy on a dais. He is wearing the Crown and a long cloth. Above the canopy, a vulture, the local goddess Nekhbet, hovers with spread wings.

In front of the king is a litter, on which a cloaked figure sits facing him. This figure may be as a princess being presented to the king for marriage or some other significant royal figure.

Behind the cloaked figure are three registers, which consist of attendants, an animal enclosure, standard-bearers, fan-bearers, and a collection of offerings.

Many hypotheses have been offered to explain the drawings on the Narmer Macehead. However, it is not clear if the illustrations commemorate a festival or a ceremony.

It is also uncertain if the events are historically significant such as the conquest of a city or whether it is just a festival attended by the king.

Illustrations on the Narmer Macehead

Narmer (3273 – 2987 BC) was an ancient Egyptian pharaoh of the Early Dynastic Period. He was the unifier of Egypt and the founder of the First Dynasty, and the first king of a unified Egypt.

A majority of Egyptologists believe that Narmer was the same person as Menes.

Narmer is well attested throughout Egypt, southern Canaan, and Sinai, with 98 inscriptions at 26 sites.

During Narmer’s reign, Egypt had an active economic presence in southern Canaan.

Narmer’s heraldic crest, along with those of other Predynastic and Early Dynastic kings, has been found in the southern Sinai, where inscriptions commemorate Egyptian mining expeditions to the area.

The Dawn of Egyptian Art