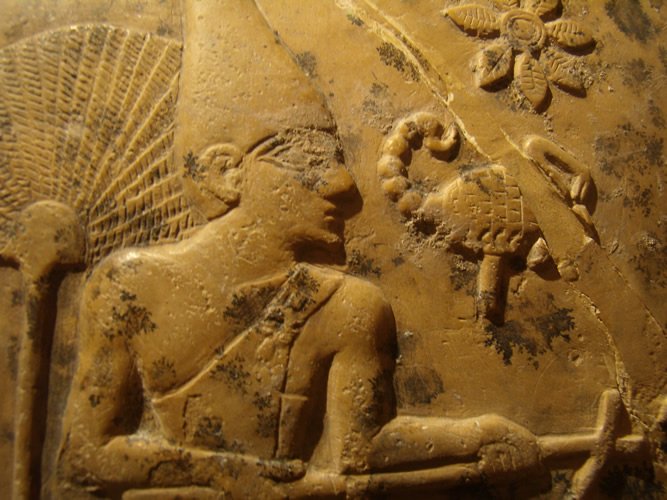 The Scorpion Macehead is an Ancient Egyptian ceremonial stone macehead. Ceremonial mace-heads are oversized versions of the small stone weapons that were typical grave goods during Egypt’s Predynastic Period.

In Ancient Egypt, the mace was the symbolic weapon of Predynastic Egypt. However, this ceremonial macehead’s function had evolved with their culture. Their size and decoration suggest that they had ritual significance, rather than a practical function.

The maceheads had become symbols of the Egyptian elite by about 3100 BC. Their surfaces were carved with imagery associated with the institution of kingship.

The scenes on the fragments of this Macehead depict King Scorpion performing the ceremonial opening of an irrigation canal.

It is attributed to the Pharaoh Scorpion (c. 3200–3000 BCE) due to the glyph of a scorpion engraved close to the image of a king wearing the White Crown of Upper Egypt.

An Egyptian glyph is the unique markings that collectively specify the meaning. In this case, Scorpion II, who was a ruler during the Protodynastic Period of Upper Egypt (c. 3200–3000 BC).

On the Macehead, the king is standing by a body of water and is followed by two fan bearers. A scorpion and a rosette are depicted close to his head.

He is facing a man holding a basket and men holding standards. Several men are busy along the banks of the canal.

In the rear of the king’s retinue are some plants, a group of women clapping their hands, and some people, all of them facing away from the king.

Attended by fan-bearers, the king wears a ceremonial bull’s tail. Standing before him, a man holding a basket, and another carrying a broom, wait to collect the earth removed by the king’s hoe.

In Ancient Egyptian depictions, perspective was not used; instead, depth was depicted by a more remote scene above a closer one.

People’s lower body, legs, arms, and head were almost always shown in profile, while their torso was depicted in frontal view, as was the eye.

Legs are always apart. The size of the figure was often dependent on status; the king is depicted larger than their inferiors.

The Scorpion macehead was found by British archeologists in the Temple of Horus at Hierakonpolis during the dig season of 1897–1898. The Macehead measures 25 centimeters long, and it is made of limestone in a pear-shape. 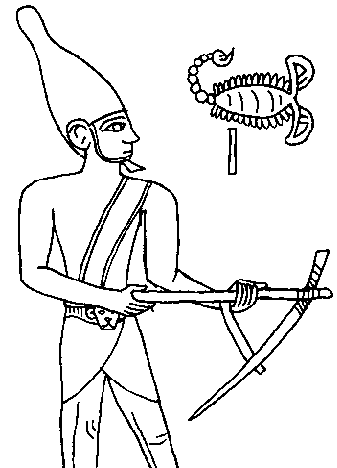 Drawing of Scorpion II from the Scorpion Macehead

Scorpion II, also known as King Scorpion, was a ruler during the Protodynastic Period of Upper Egypt (c. 3200–3000 BC).

The only pictorial evidence of his existence is the Scorpion Macehead. The stratigraphy of this Macehead was lost due to the methods of its excavators. But its style seems to date this macehead to the very end of the Predynastic Period.

The Scorpion Macehead depicts a single, large figure wearing the White Crown of Upper Egypt. He holds a hoe, which has been interpreted as a ritual.

Scorpion II may have been the founder of Nekhen or Buto, which would explain why the Macehead was found in Hierakonpolis.

King Scorpion may have been the immediate predecessor of King Narmer. He would therefore belong to the group of rulers preceding the kings of the historic 1st Dynasty.

The Scorpion King and the Birth of Egypt

The Real Scorpion King – Scorpion I of Egypt