The “Sumerian King List” is a clay prism with ancient Sumerian text that lists the kings of Sumer from Sumerian and neighboring dynasties.

This clay cuneiform inscribed vertical prism is also called the Weld-Blundell Prism. The four sides, about 20 cm high and 9 cm wide are marked in the Sumerian language.

The prism lists the Sumerian kings with each side containing the text in two columns. The list begins with the antediluvian rulers and ends with the Dynasty of Isin (1827–1817 BC).

The list includes the King’s reign lengths and the locations of the kingship, and the list of kings is sequential.

Many of the Kings were contemporaries, reflecting the belief that kingship was handed down by the gods and could be transferred from one Sumerian city to another in southern Mesopotamia.

Although the primal kings are historically unattested, they may have been actual rulers who were later mythicized. However, some Assyriologists view the predynastic kings as a later fictional addition.

Herbert Joseph Weld Blundell (1852 –  1935) was an English traveler and archaeologist. In 1922 he presented the Weld Blundell Collection, which included the Sumerian King List, to the University of Oxford. 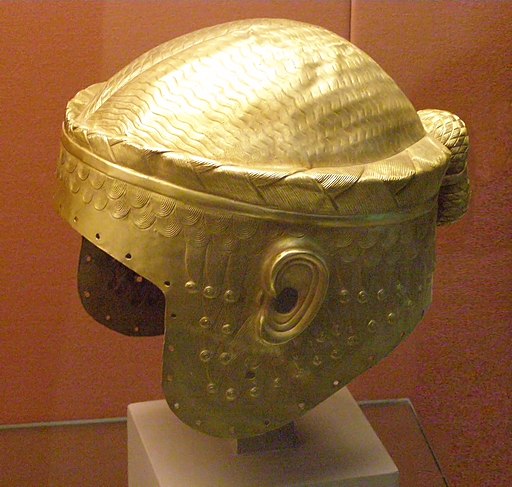 Gold helmet of Meskalamdug, founder of the First Dynasty of Ur

Sumer is the earliest known civilization in the historical region of southern Mesopotamia, now southern Iraq. Their prehistoric proto-writing dates back before 3000 BC.

It is also one of the first civilizations in the world, along with Ancient Egypt, Norte Chico, Minoan civilization, Ancient China, Mesoamerica, and the Indus Valley.

Living along the valleys of the Tigris and Euphrates, Sumerian farmers grew an abundance of crops, and the surplus enabled them to form urban settlements.

The history of Sumer, including the prehistoric Ubaid and Uruk periods, spans the 5th to 3rd millennia BCE, ending around 2004 BCE, followed by a transitional period before the rise of Babylonia in the 18th century BCE.

The last period of Sumer was the Third Dynasty of Ur  2047–1940 BC, after which the Sumerian identity decline, as the population became continually absorbed into the Akkadian (Assyro-Babylonian) population.

When Kingship came down from Heaven: Ethics and the political

“He who possesses many things is constantly on guard.”
– Sumerian Quote