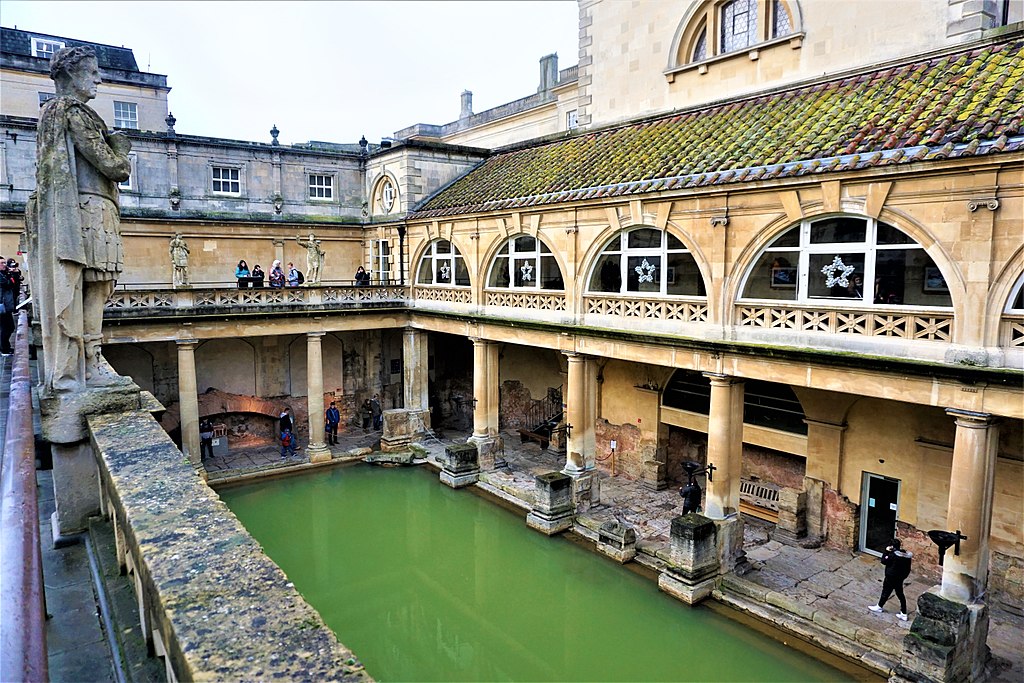 There are four main parts to the complex: the Sacred Spring, the Roman Temple, the Roman Bath House, and the museum, holding finds from Roman Bath. The buildings above street level date from the 19th century.

Bath is the largest city in the county of Somerset, England, best known for its Roman-built baths. Bath is in the valley of the River Avon, 97 miles (156 km) west of London.

Early in its history, the city became a spa center with the Latin name Aquae Sulis meaning “the waters of Sulis,” about 60 AD when the Romans built baths and a temple at this ancient spot on the River Avon.

The hot springs were known well before the Romans and were a sacred site for the local Celts, with a reputation for heated springs that healed the sick.

Archaeological evidence shows that the site of the Roman baths’ main spring was treated as a shrine by the Britons, and was dedicated to the Goddess Sulis, whom the Romans identified with Minerva.

The name Sulis continued to be used after the Roman invasion, appearing in the town’s Roman name, Aquae Sulis. Messages to her scratched onto metal, known as curse tablets, have been recovered from the sacred spring by archaeologists.

The tablets were written in Latin, and cursed people whom the writers felt had wronged them.

Later with the arrival of Christianity, Bath Abbey was founded in the 7th century and became a religious center.

In the 17th century, claims were made for the curative properties of water from the springs, and Bath became famous as a spa town in the Georgian era.

Georgian architecture, crafted from Bath stone, together with modern streets and squares laid out in the 18th century, made the city fashionable and attracted a growing population and wealth.

The Romans constructed a temple in AD 60–70, and a bathing complex was built up over the next 300 years. Roman engineers drove oak piles into the mud to provide stable foundations and surrounded the spring with an irregular stone chamber lined with lead.

In the 2nd century, the spring was enclosed within a wooden barrel-vaulted structure. The Baths consisted of the caldarium (hot bath), tepidarium (warm bath), and frigidarium (cold bath).

The town was later given defensive walls in the 3rd century. After the retreat of Roman authority in the first decade of the 5th century, the baths fell into disrepair. They were eventually lost as a result of rising water levels and silting.

The baths were eventually rediscovered and modified on several occasions, and today the springs are housed in 18th-century architecture.

Victorian expansion of the baths complex followed the neo-classical tradition. Victorian visitors drank the waters in the Grand Pump Room, a neo-classical salon which remains in use, both for taking the waters and for social functions.

A Virtual Tour of the Roman Baths

This Temple Pediment was once on the front of the “Temple of the Temple Sulis Minerva” at Bath, England, and is one of the few genuinely classical temples from Roman Britain to have been discovered.

Nearly 2,000 years ago, it housed that the statue of the Goddess Sulis Minerva.

The pediment carries the image of a fearsome head, carved in local Bath stone, which is thought to be the Gorgon’s Head, a potent symbol of the Goddess Sulis Minerva.

The pediment is full of allusions and was supported initially by four massive columns.

The central image is either a male Gorgon or a representation of a Celtic-Roman water god who looked on to all who entered the temple, with snakes entwined within its beard and portrayed with a heavy mustache.

The central head is held aloft by female ‘Victories,’ on a shield ringed with oak leaves. The Victories stand on globes, and in the corners are Tritons, half-men, and half-fish servants of the water god Neptune.

The first shrine, at the site of the hot springs at Bath, was built by Celts and dedicated to the Goddess Sulis, whom the Romans identified with Minerva.

The name Sulis continued to be used after the Roman invasion, leading to the town’s Roman name of Aquae Sulis “the waters of Sulis.” The temple was constructed in 60–70 AD, and the bathing complex was gradually built up over the next 300 years.

The Roman Baths at Bath

The buildings above street level date from the 19th century. There are four main parts to the complex:

In pre-Roman times, during the Celtic polytheism practiced in Britain, the Goddess Sulis was worshipped at the Bath thermal springs as a local deity.

The head is slightly larger than life-size and hidden in the hairline are several small holes which once held rivets that fixed her Corinthian helmet to her head.

Discovery in 1727 it was an indication that the Roman site at Bath was not a typical settlement. Gilt bronze sculptures are rare finds from Roman Britain.

It is assumed to be the head is the cult statue of the Goddess, which would have stood within the Temple beside the Sacred Spring.

Sulis was the local Goddess of the thermal springs that still feed the spa baths at Bath, which the Romans called Aquae Sulis (“the waters of Sulis”).

Celtic deities often preserved their archaic localization, and they remained associated with a specific place, usually a cleft in the earth, a spring, pool, or well.

The Greeks referred to the similarly local pre-Hellenic deities in the local epithets that they assigned, associated with the cult of their Olympian pantheon at certain places.

This inscription is the earliest from the Roman Baths and dates to 76AD. The inscription reads: “.. in the 7th consulship of Emperor Vespasian”.

It was part of a small monument at the site, and the date is seven years after Vespasian became emperor of Rome.

Roman Public baths originated from a communal need for cleanliness and the health benefits of the hot springs at a time when most houses did not have access to private bathing facilities.

In ancient times public bathing included saunas, massages, and relaxation therapies. Public baths were restricted depending on social rank and wealth and became incorporated into the social system as meeting places. 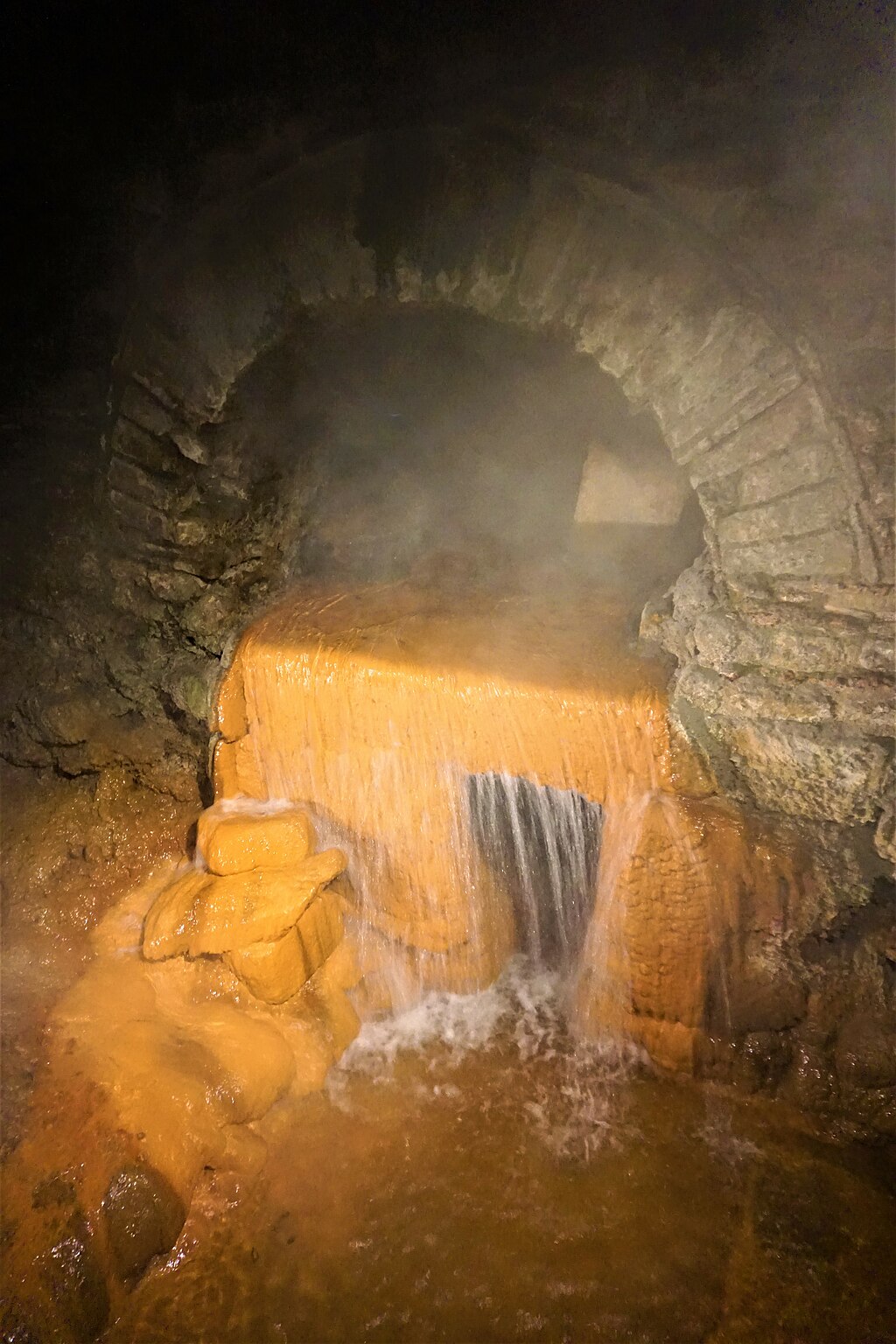 The Sacred Spring Overflow is where surplus mineral-rich water from the hot spring pours into the original Roman drain and flows on to the River Avon.

The Roman plumbing and drainage system is still in place and demonstrates the ingenuity of the Roman engineers. Lead pipes were used to carry hot spa water around the site using gravity flow.

The thermal waters contain sodium, calcium, chloride, and sulfate ions in high concentrations, and the mineral deposits can be seen in the colorization of the stones at this overflow point.

The natural springs in the heart of the city deliver over 1 million liters of mineral-rich water every day.

The water which bubbles up from the ground at Bath falls as rain on the nearby hills, which then percolates down through limestone aquifers to a depth of over 2,700 meters (8,900 ft).

The geothermal energy then raises the water temperature to between 69 and 96 °C (156.2 and 204.8 °F). Under pressure, the heated water rises to the surface along fissures and faults in the limestone. The Hypocaust of the Heated Room in the Roman Baths was a system of central heating in the baths that produces and circulates hot air below the floor of a room.

This hypocaust pilae shows how their heating system would have worked. These pillars of tiles supported the floor of this room, and the room was heated with hot air drawn from fire and circulated these tile posts.

Most Roman Public Baths were built around three principal rooms: the caldarium (hot bath), the tepidarium (warm bath), and the frigidarium (cold bath).

The Roman Baths in Bath included thermae, due to the hot springs, which featured steam baths: the sudatorium, a moist steam bath, and the laconicum, a dry, hot room much like a modern sauna.

This Heated Room would have been a hot and steamy room heated by the hypocaust and was the hottest room in the regular sequence of bathing rooms.

After the caldarium, bathers would progress back through the tepidarium to the frigidarium. The bathers would use olive oil to cleanse themselves by applying it to their bodies and using a strigil to remove the excess oil.

The used oil was left on the floor for the slaves to pick up. The collected oil from the floor was put back in the pot for the women to use for their hair.

Many objects were thrown into the Sacred Spring as offerings to the Goddess, including “Curse Tablets.”

The Curse Tablets contained messages inscribed on sheets of lead or pewter, which were then rolled up and thrown into the Spring, where the spirit of the Goddess dwelt. The Roman Baths have a collection of Roman curse tablets, which include Britain’s earliest prayers.

The picture above has a sample of three curses written for the Goddess. From left to right, the curses include:

A theft was always a risk in public baths. A slave was required to watch over the expensive clothes as visiting the Baths was a social occasion and needed one’s good clothes.

When a culprit was unknown, a list of suspects was sometimes submitted to the Goddess, to help find the thief. 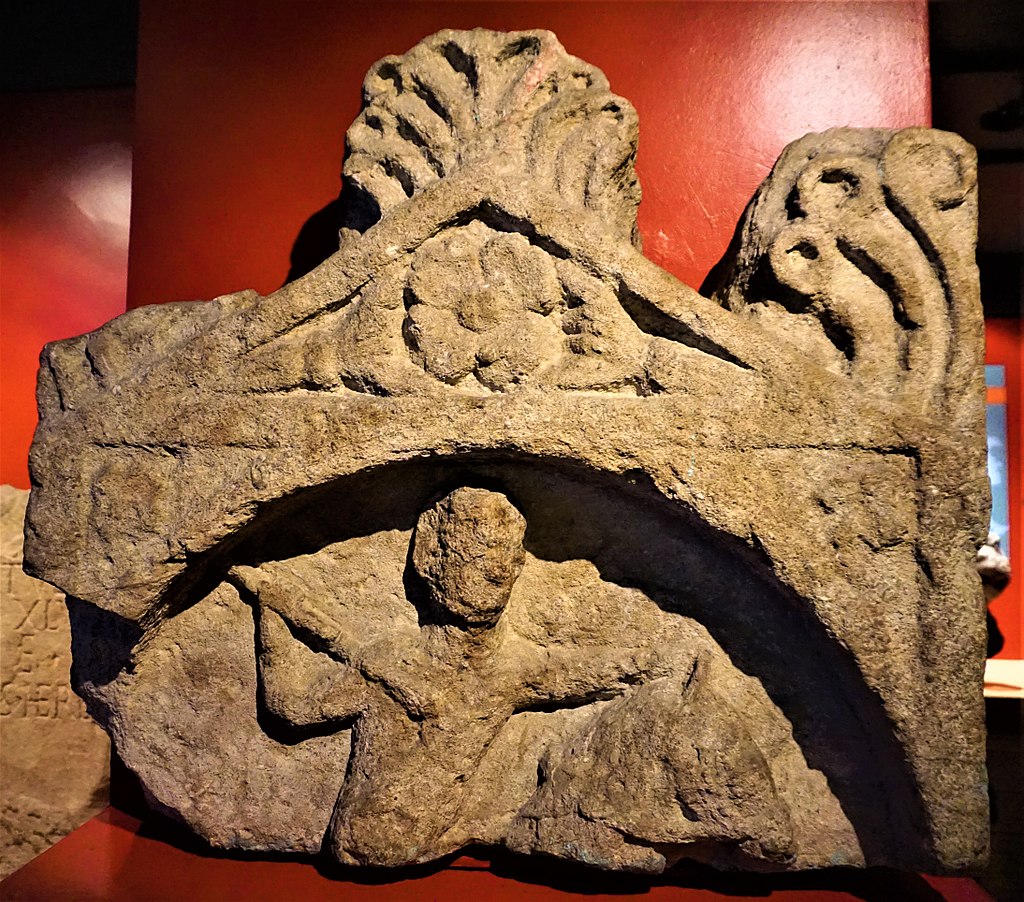 This Gravestone of a Cavalryman shows a cavalryman riding down an enemy. This motif was a traditional theme with gravestones pf cavalrymen in the 1st century AD.

The first Romans to come to Bath were soldiers of the empire, and there are many Roman inscribed tombstones and altars discovered around the Roman Baths.

Welcome to the Roman Baths

Tour of the Roman Baths in Bath, UK, England

“If you have a garden and a library, you have everything you need.”
– Marcus Tullius Cicero