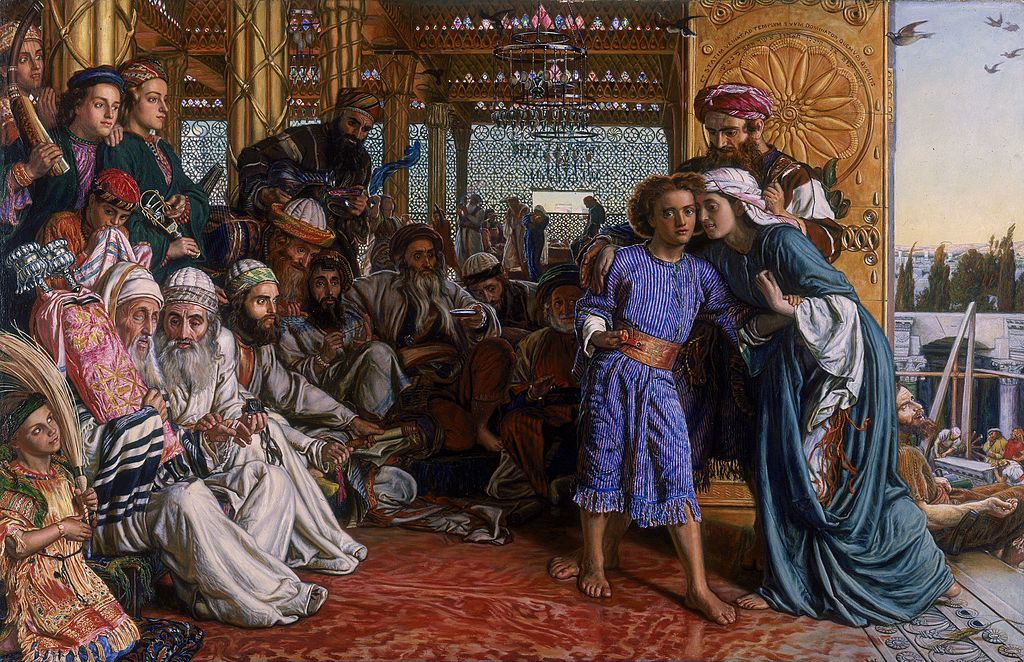 “The Finding of the Savior in the Temple”

“The Finding of the Savior in the Temple” by William Holman Hunt was intended as a historically accurate depiction of the child Jesus debating the interpretation of the scriptures with learned rabbis.

The painting illustrates a passage from the Gospel of Luke and depicts the moment at which Mary and Joseph find Jesus in the temple.

Meanwhile, the rabbis in the temple are reacting in various contrasting ways to his questions and responses, some intrigued, others angry or dismissive.

This depiction of the child Jesus debating with the rabbis who respond with different reactions is part of the tradition of this subject in art.

Hunt was obsessed with the idea of revitalizing religious art by emphasizing ethnographical accuracy combined with detailed Biblical symbolism.

He traveled to the Middle East to conduct his research before creating this picture. Hunt used local people as models, and he studied ancient Judaic customs and rituals.

Difficulties with models delayed progress on the painting, and eventually, Hunt postponed it until finally completing it in 1860, back in England.

The inspiration for this painting comes from the Gospel of Luke, which states:

“After three days they found him in the temple courts,
sitting among the teachers,
listening to them and asking them questions.
Everyone who heard him was amazed at his understanding and his answers.
When his parents saw him, they were astonished.
His mother said to him, “Son, why have you treated us like this?
Your father and I have been anxiously searching for you.”
“Why were you searching for me?” he asked.
“Didn’t you know I had to be in my Father’s house?”
But they did not understand what he was saying to them.”

One of Hunt’s friends wrote a detailed pamphlet with an explanation of the content, symbolism, and the characters in this painting.

It was then shown in a series of successful traveling exhibitions at which visitors could buy the brochure and subscribe to an engraved reproduction. These exhibitions of this painting and its backstory proved a tremendous financial success.

William Holman Hunt (1827 – 1910) was an English painter and one of the founders of the Pre-Raphaelite Brotherhood. His paintings were notable for their great attention to detail, vivid color, and symbolism.

Of all the members of the Pre-Raphaelite Brotherhood, Hunt remained most true to their ideals throughout his career. He was always keen to maximize the popular appeal and public visibility of his works.

‘Finding the Saviour in the Temple’ (1860, William Holman Hunt)