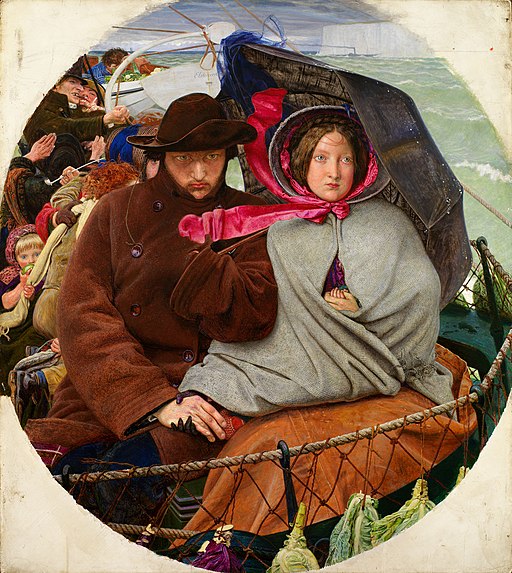 “The Last of England” by Ford Madox Brown

“The Last of England” by Ford Madox Brown depicts two emigrants leaving England to start a new life in Australia with their small baby.

The emigrating couple stares stoically ahead, stony-faced, ignoring Dover’s white cliffs, which can be seen disappearing behind them in the top right of the picture.

They are huddled under an umbrella that provides shelter from the sea-spray. The faces of the man and his wife, who are seeing England for the last time, are modeled on the artist, Brown, and his second wife, Emma’s portraits.

In the foreground, a row of cabbages hangs from the ship’s rail, provisions for the long voyage. In the background are other passengers, including a pair of drunken men, one of whom was conceived by Brown as shaking his fist and cursing the land of his birth.

Also, in the background is a family consisting of the father, eldest daughter, and younger children, their mother (like Brown’s first wife) has died, and they are seeking a new beginning.

The father is barely visible except for the pipe he holds, and his daughter has her arm around a curly red-haired boy. The fair-haired child eating an apple is a portrait of the artist’s first daughter, Catherine.

The woman has a baby concealed under the cloak in the foreground, whose hand she is clasping; this baby symbolized the artist’s second infant child.

The family’s clothing and the bundle of books next to them indicate that they are middle class and educated. Brown composed a short verse to accompany the painting in which the woman is depicted as hopeful for the future:

“She grips his listless hand and clasps her child,
Through rainbow tears, she sees a sunnier gleam,
She cannot see a void where he will be.”

Brown began the painting in 1852, inspired by the departure of his close friend, the Pre-Raphaelite sculptor, Thomas Woolner, who had left for Australia that year. Emigration from England was at over 350,000 people that year.

At the time of this painting, Brown was thinking of moving to India with his new family. This painting may explain his feelings about leaving and why he did not emigrate?

Although Ford Madox Brown was never a member of the Pre-Raphaelite Brotherhood, this painting, like many of his paintings, exhibits the movement’s characteristics in its bright color and a particular focus on naturalistic detail.

The format of the picture is circular. It may have been influenced by telescopes at the seaside, which became the fashion at mid-century.

This painting was voted Britain’s eighth-favorite picture in a poll carried out by BBC Radio. It was also voted 32 out of 57 paintings chosen by the British public from national collections used in a large Art Exhibition.

The Last of England – Cartoon, Pencil, image edged with brown ink on paper.

Ford Madox Brown (1821 – 1893) was a French-born British painter of moral and historical subjects, notable for his distinctively graphic Pre-Raphaelite style.

Ford Madox Brown was married twice. His first wife died in Paris, aged 27, on the journey back to England from Rome.

Emma Hill became a frequent Brown model, six years after his first wife’s death; she is the wife in “The Last of England.”

Emma became his mistress, and they shared a house in London, but social convention made him unable to marry an illiterate daughter of a bricklayer. After the birth of his first daughter, they were married.

The Last of England

“The Last of England” by Ford Madox Brown

A Virtual Tour of Museums in the United Kingdom

“The past is not dead; it is living in us and will be alive in the future, which we are now helping to make.”
– William Morris