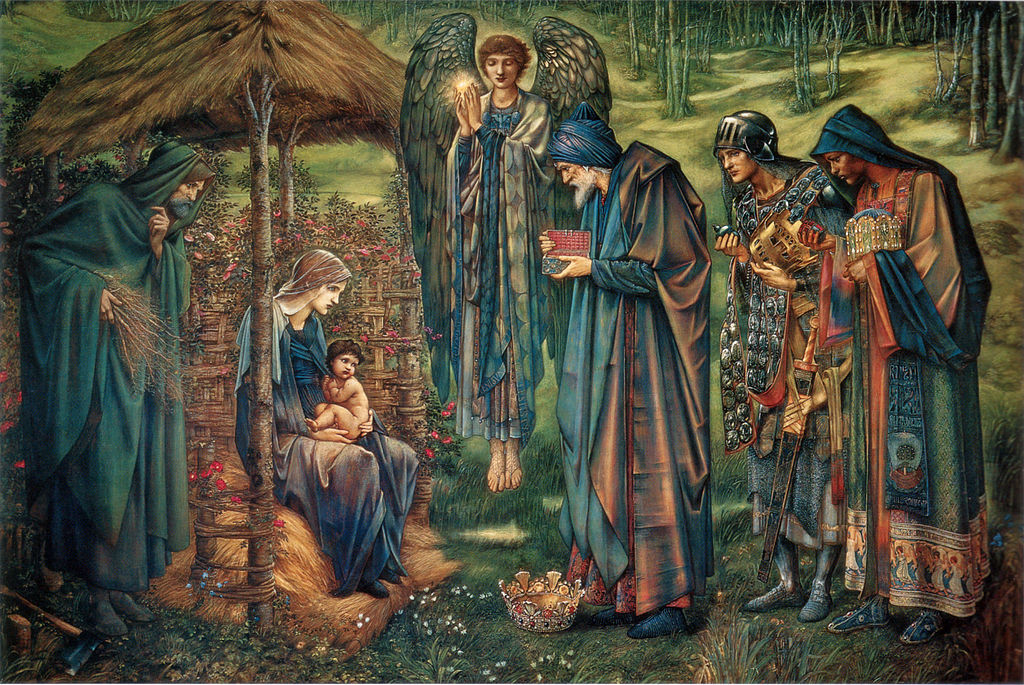 “The Star of Bethlehem” by Edward Burne-Jones

“The Star of Bethlehem” by Edward Burne-Jones is a painting in watercolor depicting the “Adoration of the Magi” with an angel holding the star of Bethlehem.

The “Adoration of the Magi” is the name traditionally given to the subject in the Nativity of Jesus in art in which the three Magi, represented as kings, having found Jesus by following a star, lay before him gifts of gold, frankincense, and myrrh, and worship him.

This painting was commissioned by the City of Birmingham for its new Museum and Art Gallery in 1887. It was the largest watercolor of the 19th century, completed in 1890.

In the earliest depictions of “Adoration of the Magi,” the Magi are shown wearing Persian dress of trousers and Phrygian caps with their gifts held out before them.

Later images adapt Late Antique poses for barbarians submitting to an Emperor, and presenting golden wreaths, influenced by the images of tribute-bearers from various ancient cultures.

The crowns on the Magi were first depicted in the 10th century, mostly in the West. Whereas, their dress had, by that time, lost any Oriental flavor. This depiction reflected the tastes of Victorian Era England with Pre-Raphaelite influences.

In this painting, the three Magi have taken their royal crowns off. One of the Kings has laid his crown on the ground, while the other Kings are holding their crowns.

All three Kings are very elaboratively dressed. The first King, with the crown at his feet, is wearing a silk robe.

The hem of his inner garment is decorated with Saint George and the Dragon. Does he represent a King from the British Isles?

The second king is dressed as a soldier or knight with medallion decorations showing mythological images. Is this a Greek or Roman King?

The third King represents Africa, and his clothing displays an image of a medieval ship and dancing angels around the hem of his robe. Is he an Ethiopian King?

Joseph is on the far left, and he is shown holding copped branches, and he has laid his axe down by his feet. At the feet of Mary are small white flowers commonly known as “Star of Bethlehem.”

The baby Jesus is shown as vulnerable and very human. The “Star of Bethlehem” which the Magi followed, is not shown in the sky, it is in the center of the composition held as a light by the floating angel.

This painting is related to the Bible by Matthew:

“They saw the child with Mary, his mother;
and they knelt and paid him homage.
Then, opening their treasure chests,
they offered him gifts of gold, frankincense, and myrrh.
And having been warned in a dream not to return to Herod,
they left for their own country by another path”.

This painting allowed Burne-Jones to revisit his early depiction of this subject from a tapestry design he had created.

The color palette with its rich blue-greens and its large size allowed him to add more exceptional rich detail not possible in the tapestry version, especially in the clothing.

He was closely associated with the later phase of the Pre-Raphaelite movement, who worked closely with William Morris on a wide range of decorative arts as a founding partner in Morris, Marshall, Faulkner & Co.

Burne-Jones and was closely involved in the rejuvenation of the tradition of stained glass art in Britain.

Burne-Jones’s early paintings show the considerable inspiration of Dante Gabriel Rossetti, but by the 1860s, Burne-Jones was discovering his artistic style. In 1877, he exhibited eight oil paintings at the Grosvenor Gallery, a new rival to the Royal Academy.

This opportunity allowed him to be heralded as a star of the new Aesthetic Movement.

Burne-Jones also worked in a variety of crafts, including designing ceramic tiles, jewelry, tapestries, and mosaics.

The Star of Bethlehem

Explore Museums in the United Kingdom

Victoria Osborne talks about The Star of Bethlehem

“The more materialistic science becomes,
the more angels shall I paint.
Their wings are my protest in favor of the immortality of the soul.”
– Edward Burne-Jones