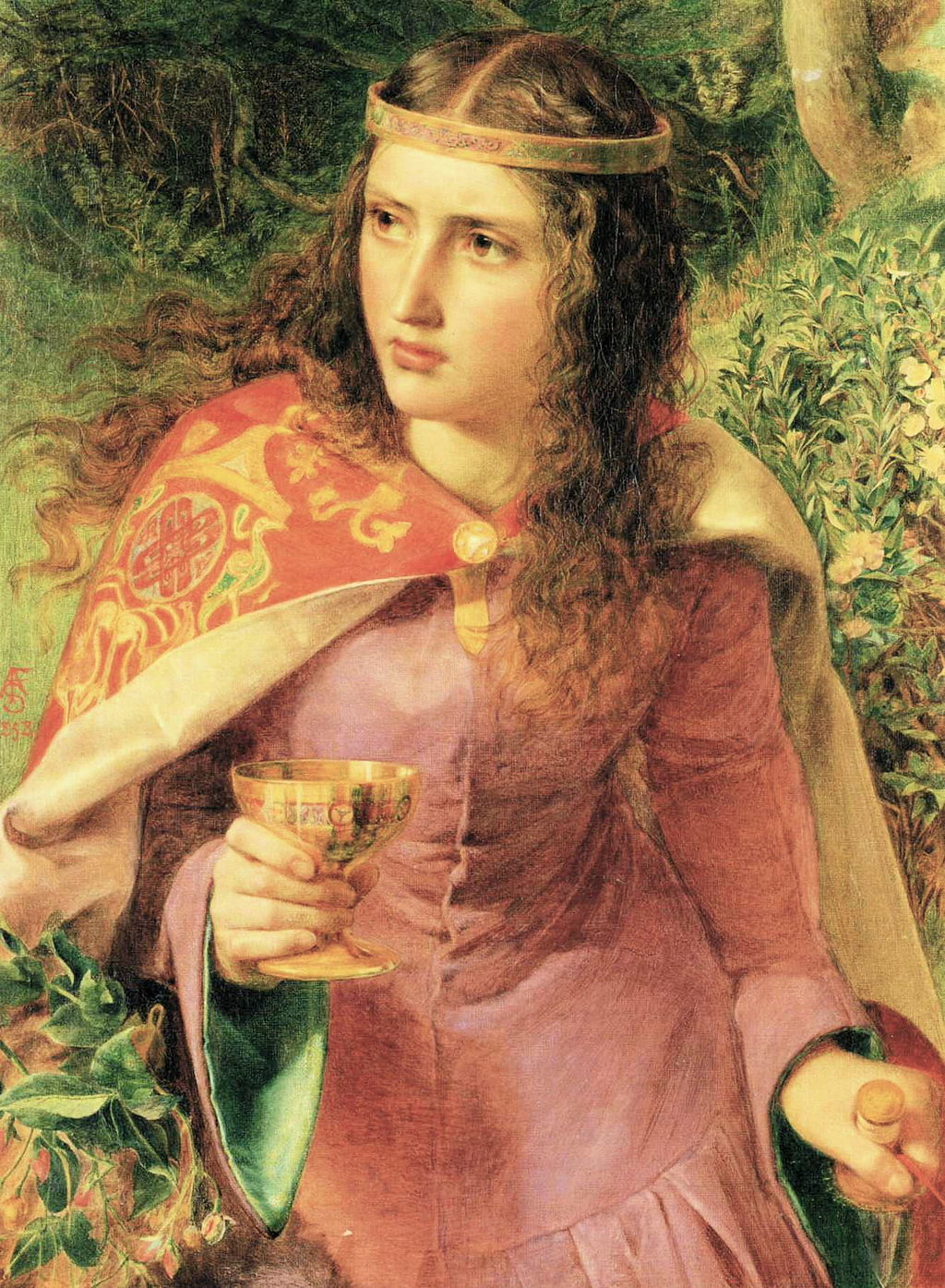 The traditional story recounts that King Henry concealed his affair from Queen Eleanor by conducting it within a complicated maze’s innermost recesses.

Queen Eleanor penetrated the labyrinth to Rosamund’s bower while trailing a red cord. The red thread is shown in her left hand.

The Queen then and forced her rival to choose between a dagger and a bowl of poison. Fair Rosamund chose the poison and died.

Eleanor of Aquitaine (1122 – 1204) was queen consort of France and England and Duchess of Aquitaine in her own right.

As a member of the House of Poitiers, which ruled in southwestern France, she was one of the wealthiest and most powerful women in western Europe during the High Middle Ages.

She was a patron of literary figures, and she also led armies several times in her life and was a leader of the Second Crusade.

As the duchess of Aquitaine, Eleanor was the most eligible bride in Europe. She married King Louis VII of France, and as the queen of France, she participated in the unsuccessful Second Crusade.

Soon afterward, Eleanor sought an annulment of her marriage. The King eventually agreed to an annulment, as the 15 years of marriage had not produced a son. Their daughters were declared legitimate, and their custody was awarded to Louis, but Eleanor’s lands were restored.

As soon as the annulment was granted, Eleanor became engaged to the Duke of Normandy, who became King Henry II of England in 1154.

Henry was 11 years younger, and over the next 13 years, she bore eight children: five sons, three of whom became kings, and three daughters.

It was at this time that the poisoning of the King’s mistress occurred, and Eleanor’s marriage to Henry appears to have become terminally strained.

Henry imprisoned Eleanor in 1173 for supporting their son Henry’s revolt against him. She was not released until 16 years later after Henry died, and her son, Richard the Lionheart, ascended the throne.

As queen dowager, Eleanor acted as regent while Richard went on the Third Crusade. Eleanor also lived well into the reign of Richard’s heir and her youngest son, John.

Henry had met her in 1166 and had begun their liaison in 1173. The king had many mistresses, but although he treated earlier liaisons discreetly, he flaunted Rosamund. He may have done so to provoke Eleanor into seeking an annulment.

The traditional story recounts that to conceal his illicit affair from Eleanor, he conducted them within the innermost recesses of a complicated maze, which he caused to be made in his park at Woodstock, Oxfordshire.

Queen Eleanor heard rumors, and she contrived to penetrate the labyrinth, confronted her rival.

Frederick Sandys was an English painter and illustrator associated with the Pre-Raphaelites and Norwich School of painters.

Sandys specialized in half-length figures of beautiful but often destructive women. Sandys’s meticulous attention to detail is typical of the Pre-Raphaelite school.

By the early 1860s, he began to exhibit the paintings which set his reputation. The dominant influences on his art were conceptions of tragic power.

The somber intensity and stern beauty in his art meant that it was not always popular.

The Lion in Winter – ‘Eleanor’s Arrival’

“What family doesn’t have its ups and downs?”
– Eleanor of Aquitaine