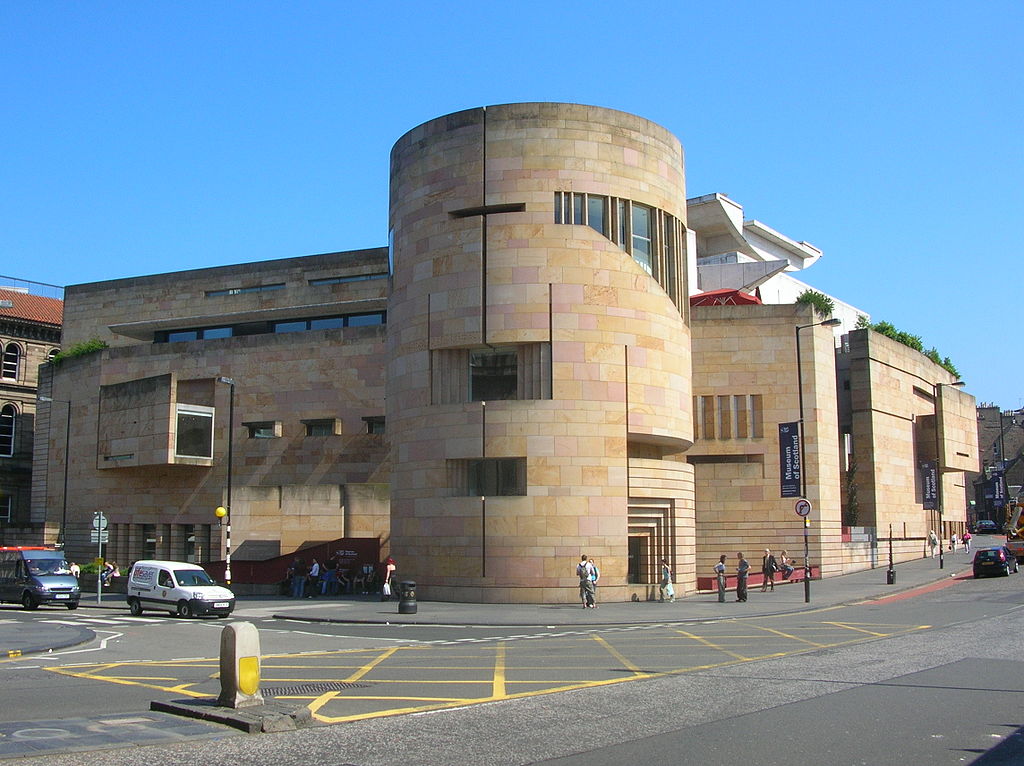 The joint collections include Scottish antiquities, culture, and history,  plus science and technology, natural history, and world cultures. The two connected buildings stand beside each other in central Edinburgh.

The galleries include 8,000 objects. Notable exhibits include Dolly the sheep, Ancient Egyptian exhibitions, a large kinetic sculpture named the Millennium Clock, and The Maiden, an early form of a guillotine.

Virtual Tour of the National Museum of Scotland

Highlights Tour of the National Museum of Scotland

The Monymusk Reliquary is a 750s Scottish Reliquary. It is made of wood and plated with silver and bronze.

It features Insular art, also known as Hiberno-Saxon art, which is the style of art produced in the post-Roman history of Ireland and Britain.

This reliquary was used for divine assistance by the Scots in battle. It was carried by the Scottish army who were victorious against the army of King Edward II of England at the Battle of Bannockburn in 1314.

It is one of the most important pieces in the Museum’s entire collection.

It is a magnificent example of a Pictish cross-slabs and dates to about 800 AD. The Picts were a tribal confederation of people who lived in what is today eastern and northern Scotland during the Late Iron Age and Early Medieval periods.

The Picts were ethnolinguistically Celtic, and this Pictish stones helps shed light on their culture. The stone was formerly near a chapel just north of the village.

On the seaward-facing side is a Christian cross. At this time, Scotland was becoming Christian and sculptured stones like this one were created to celebrate the new religion.

The 78 Chess pieces might have belonged to at least five different Chess Sets. Most of the pieces are sculptured to represent human figures, except for the smaller Pawn pieces which had geometric shapes.

The Knight pieces are mounted on horses and are shown holding spears and shields. The rooks pieces depict standing warders carrying shields and swords.

Four of the rooks are shown as wild-eyed berserkers biting their shields with battle fury. The chess pieces were designed to displayed strength and ferocity.

This mask was worn as a disguise by the outlawed Covenanting minister Alexander Peden (1626 – 1686). He was also known as “Prophet Peden” and was one of the leading figures in the Covenanter movement in Scotland.

The Covenanters were a Scottish Presbyterian movement that refused to accept the King as the spiritual head of the church in Scotland.

They believed that Jesus Christ was the head of the church. They also rejected the traditional church hierarchy, which was ruled by bishops. They thought that their congregations should choose ministers.

For Charles I, this attitude was treasonous, and he declared war on the Covenanters. This war eventually resulted in the broader civil war across England, Scotland, and Ireland, in which the King was ultimately executed in 1649.

In 1660, his son Charles II was restored to the throne, and he soon declared himself the head of the Scottish Church. A period of persecution followed, in which over 300 ministers were forced from their churches.

Map for National Museum of Scotland

“A day to come seems longer than a year that’s gone.”
– Scottish Proverb