This mask was worn as a disguise by the outlawed Covenanting minister Alexander Peden (1626 – 1686). He was also known as “Prophet Peden” and was one of the leading figures in the Covenanter movement in Scotland.

The Covenanters were a Scottish Presbyterian movement that refused to accept the King as the spiritual head of the church in Scotland.

They believed that Jesus Christ was the head of the church. They also rejected the traditional church hierarchy, which was ruled by bishops. They thought that their congregations should choose ministers.

For Charles I, this attitude was treasonous, and he declared war on the Covenanters. This war eventually resulted in the broader civil war across England, Scotland, and Ireland, in which the King was ultimately executed in 1649.

In 1660, his son Charles II was restored to the throne, and he soon declared himself the head of the Scottish Church. A period of persecution followed, in which over 300 ministers were forced from their churches.

They became outlaw preachers, continuing to fight for their religious beliefs and cause. They preached at open-air services, which became punishable by death under King’s new laws.

Covenanters were hunted down by government troops, imprisoned, executed, or transported to the colonies. This bloody period became known as “the Killing Times.”

During this time, for ten years, Alexander Peden wandered far and wide, preaching and bringing comfort to his people. He had many very narrow escapes from capture, spending some of his time in Ireland.

Peden’s Cave entrance. He sheltered here following a conventicle he held in 1665.

To hide his identity, Peden took to wearing this cloth mask and wig. Most of his preaching was done in the south and west of Scotland.

When not preaching, he would travel between sites, sleeping in caves and shelters. He wore this mask to avoid recognition and capture.

Peden was born on a farm in Scotland about 1626 and was educated at the University of Glasgow. He was a teacher, schoolmaster, precentor, and session-clerk before becoming an ordained minister.

Soon after, he was ejected by an Act of Parliament, and Decreet of Privy Council and Peden became the most celebrated illegal field preacher of his time.

He wandered all over the South of Scotland, gaining an extraordinary reputation with the people, which was only increased by his hardships, perils, and numerous hairbreadth escapes from the law. 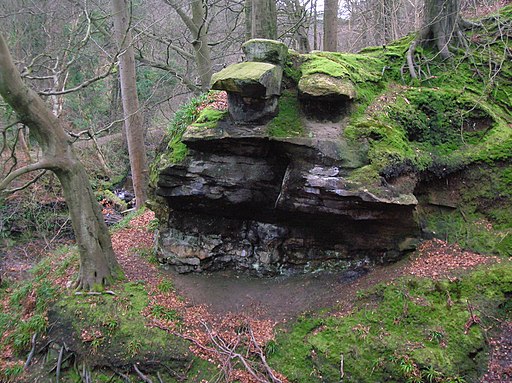 One of Peden’s pulpits which overlooks a natural amphitheater in Linn Glen, Dalry.

In 1666, he was denounced as a rebel, and he fled to Ireland but returned and was soon apprehended and confined. A petition for liberation was refused, and he was sentenced instead to perpetual banishment.

The captain of the ship, which was chartered to convey Peden to the Virginia plantations, on discovering that he and the others were banished for their religious opinions and not convicts, declined to take them aboard, and he went free.

From London, Peden found his way back to Scotland, and again to Ireland. His privations had gradually undermined his health, and, resolving to spend his last days in his native district, he found shelter in a cave on the banks of the Ayr, near Sorn.

Alexander Peden died in 1686 and was buried. Forty days after, a troop of dragoons lifted his corpse, carried it two miles to the gallows, and were about to hang it up in chains. Finding this impossible, they buried it at the gallows’ foundations.

After the Revolution, the inhabitants of the parish of Cumnock, in token of their esteem for Peden, abandoned their ancient burial-place and formed a new one around the gallows hill.

He was the most eminent and revered of all the Scottish covenanting preachers, and his influence was so significant that they gave him the name of “The Prophet.”

The Covenanters were a Scottish Presbyterian movement that played an essential part in the history of Scotland.

Covenanters derived their name from the word covenant meaning a bond with particular reference to the Covenant between God and the Israelites in the Old Testament.

Following the troubles with King Charles, I, and then the “The Killing Time” with Charles II, Covenanters started their migration to North America by way of Ireland.

The migration is usually dated from the year 1717, and in North America, the Covenanters became known as members of the Reformed Presbyterian Church.

The Covenanters in America were among the most vocal agitators for independence from Great Britain and volunteered in large numbers as soldiers in the revolutionary armies.

The Covenanters were also opposed to slavery, and in 1800 the Reformed Church voted to outlaw slave-holding among its members.

The Story of Alexander Peden

“Man’s law changes with his understanding of man. Only the laws of the spirit always remain the same.”
– Native American Proverb