The Hilton of Cadboll Stone is a monumental stele carved with symbols and designs discovered at Hilton of Cadboll, a village on the East coast of Scotland. It is a magnificent example of a Pictish cross-slabs and dates to about 800 AD.

The Picts were a tribal confederation of people who lived in today’s eastern and northern Scotland during the Late Iron Age and Early Medieval periods.

The Picts were ethnolinguistically Celtic, and this Pictish stones helps shed light on their culture. The stone was formerly near a chapel just north of the village.

On the seaward-facing side is a Christian cross. At this time, Scotland was becoming Christian and sculptured stones like this one were created to celebrate the new religion.

On the landward facing side of the stone are secular depictions. Carved below the Pictish symbols is a hunting scene that includes a woman wearing a large brooch riding side-saddle. Carved from local sandstone, it displays sophisticated artistry and symbolism.

Engraving of Hilton of Cadboll Stone made in 1788

The Picts were a confederation of Celtic language speaking peoples who lived to the north of the rivers Forth and Clyde. Early medieval sources report a distinct Pictish language, which today is believed to have been an Insular Celtic language.

Picts are assumed to have been the descendants of the Caledonii and other Iron Age tribes mentioned by Roman historians and on the world map of Ptolemy.

Pictish society was typical of many Iron Age societies in northern Europe, having connections and parallels with neighboring groups.

While very little in the way of Pictish writing has survived, Pictish history since the late 6th century is known from a variety of ancient sources and various Irish annals. 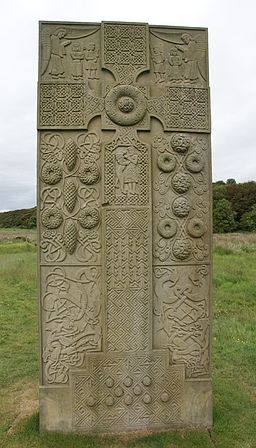 Pictish art appears on stones, metalwork, and small objects of stone and bone. It uses a distinctive form of the general Celtic Early Medieval styles with increasing influences from the Insular art of 7th and 8th century Ireland and Northumbria.

Then later in Anglo-Saxon and Irish Art during the Early Medieval period. The most remarkable survivals are the many Pictish stones that are located all over Pictland.

These stones’ symbols and patterns consist of animals, including the Pictish Beast, among many others. There are also bosses and lenses with pelta and spiral designs.

The patterns are curvilinear with hatchings. The cross-slabs are carved with Pictish symbols, Insular-derived interlace, and Christian imagery, though interpretation is often difficult due to wear and obscurity.

The Insular manuscript tradition has influenced many of the Christian images carved on various stones.

In the 8th and 9th centuries, after Christianization, the Pictish elite adopted a particular form of Celtic Art, and the 8th century Monymusk Reliquary has elements of Pictish and Irish style.

Insular art, also known as Hiberno-Saxon art, is the art style produced in the post-Roman history of Ireland and Britain. The term derives from insula, the Latin term for “island.”

Most Insular art originates from the Irish monastic movement of Celtic Christianity, or metalwork for the secular elite. The period begins around 600 with the combining of Celtic and Anglo-Saxon styles.

The major distinctive feature is interlace decoration, which was applied to decorating new objects mostly copied from the Mediterranean world, above all the codex or books.

This exceptional period of the style was brought to an end by the disruption to monastic centers and aristocratic life of the Viking raids, which began in the late 8th century.

In England, the style merged into Anglo-Saxon art around 900, while in Ireland, the form continued until the 12th century, when it merged into Romanesque Art. Ireland, Scotland, and the kingdom of Northumbria in northern England are the most important centers.

The influence of insular art affected all subsequent European medieval art, especially in the decorative elements of Romanesque and Gothic manuscripts.

Explore the National Museum of Scotland

“A good tale never tires in the telling.”
– Scottish Proverbs