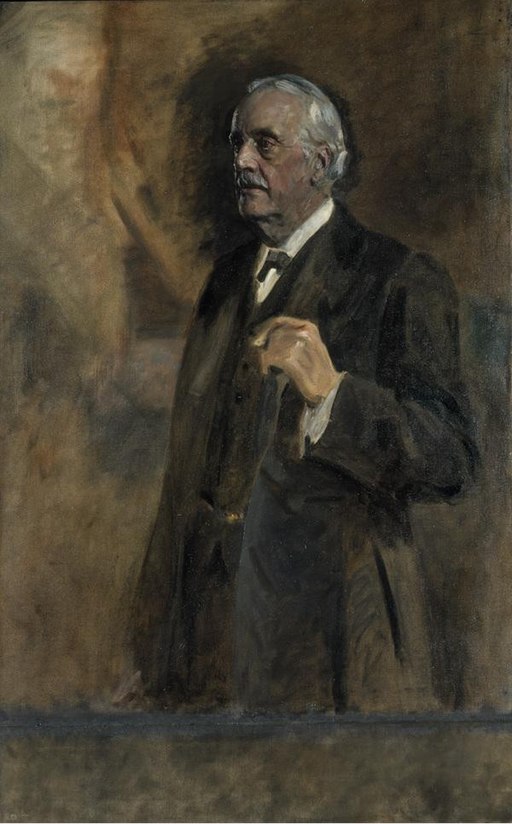 “Arthur James Balfour” by James Guthrie depicts the British Conservative statesman who served as Prime Minister of the United Kingdom from 1902 to 1905. As Foreign Secretary in the Lloyd George ministry, he issued the Balfour Declaration in 1917 on behalf of the cabinet.

From 1891 he led the Conservative Party in the House of Commons, serving under his uncle, Lord Salisbury, whose government won large majorities in 1895 and 1900.

In July 1902, he succeeded his uncle as Prime Minister. In foreign and defense policy, he oversaw British defense policy reform and secured the Entente Cordiale with France, an alliance that isolated Germany.

He resigned as prime minister in late 1905, and the following month, the Conservatives suffered a landslide defeat, in which he lost his own seat. He soon re-entered Parliament and returned as First Lord of the Admiralty in Asquith’s Coalition Government (1915–16).

Balfour trained as a philosopher and was seen as having a detached attitude to life, epitomized by a remark attributed to him: “Nothing matters very much, and few things matter at all.”

Guthrie made this oil sketch in preparation for his great commission “Statesmen of the Great War.” Balfour is standing behind a table in the final painting, leaving only his upper body visible, which explains this half-length sketch.

The Balfour Declaration was a statement issued by the British government in 1917 during the First World War, announcing support for establishing a “national home for the Jewish people” in Palestine.

Immediately following their declaration of war on the Ottoman Empire in 1914, the British War Cabinet began to consider Palestine’s future.

Subsequent discussions and negotiations with Zionist and anti-Zionist Jews’ input and the perceived propaganda benefits amongst the worldwide Jewish community for the Allied war effort led to the declaration.

The declaration was in a letter from the United Kingdom’s Foreign Secretary Arthur Balfour to Lord Rothschild, a British Jewish community leader, for transmission to the Zionist Federation. The text of the declaration was then published in the press.

The declaration had many long-lasting consequences. It greatly increased support for Zionism within Jewish communities worldwide.

It became a core component of the British Mandate for Palestine, the founding document of Mandatory Palestine, which later became Israel and the Palestinian territories.

Lord Balfour’s motivations for his 1917 Declaration