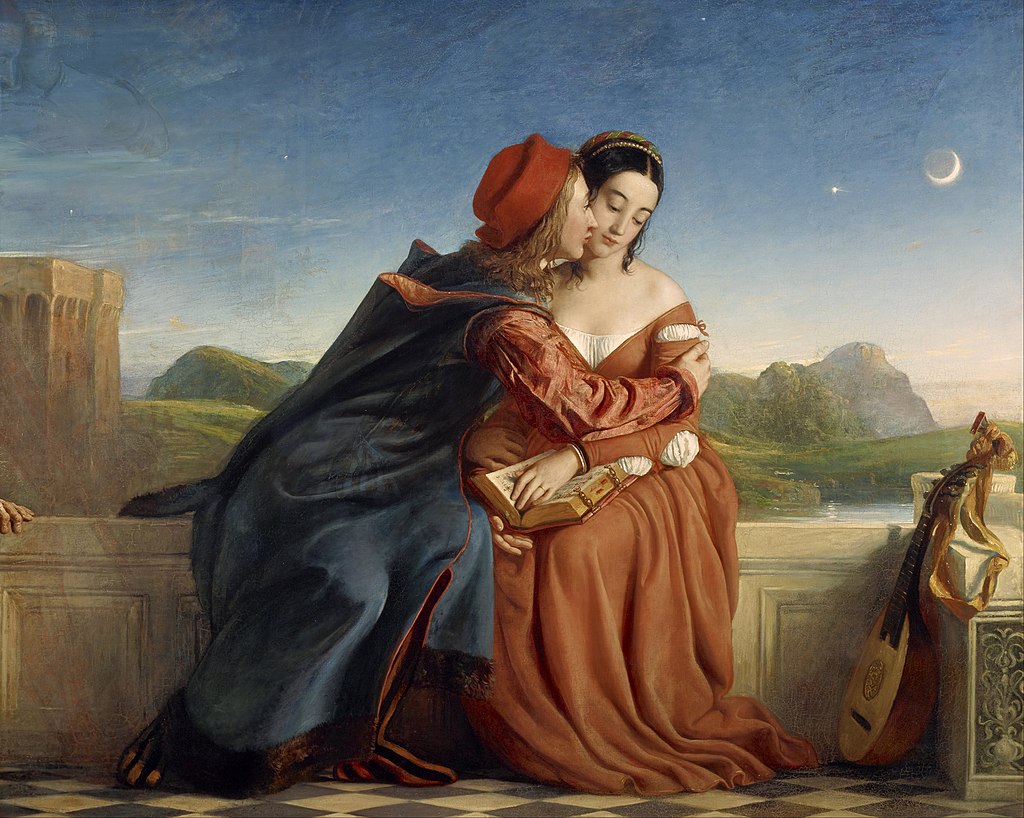 “Francesca da Rimini” by William Dyce depicts the ill-fated lovers described by Dante in his epic poem ‘The Inferno.’

In the story, Francesca was married for political reasons to an elderly and deformed husband, Gianciotto. However, soon after the marriage, while reading with his younger brother Paolo, they fell in love.

While they tried to keep their love secret, Gianciotto, her husband, surprised the lovers and then murdered them.

The artist, William Dyce, had initially included the husband in the composition. However, that part of the canvas was trimmed to remove damage to the canvas in 1882.

A hint of the tragic outcome is still suggested by the presence of Gianciotto’s hand at the far left on the ledge, which was left behind in the resized painting.

Francesca da Rimini or Francesca da Polenta (1255 – c. 1285) was the daughter of the lord of Ravenna, Guido I da Polenta of Ravenna. She was a historical contemporary of Dante Alighieri, who portrayed her as a character in the Divine Comedy.

Francesca was married to the brave, yet disabled Giovanni Malatesta in around 1275. The marriage was a political one, Francesca did not know Giovanni.

Francesca’s father had been at war with the Malatesta family, and the marriage of his daughter was a way to secure the peace that had been negotiated between the two families.

Francesca fell in love with Giovanni’s younger brother, Paolo. Though Paolo, too, was married, they managed to carry on an affair for some ten years.

Giovanni ultimately surprised the two lovers in Francesca’s bedroom sometime between 1283 and 1286 and killing them both.

In The Divine Comedy, Dante and Virgil meet Francesca and her lover Paolo in the second circle of hell, reserved for the lustful.

Here, the couple is trapped in an eternal whirlwind, doomed to be forever swept through the air just as they allowed themselves to be swept away by their passions.

Dante calls out to the lovers, who are compelled to pause before him briefly, and he speaks with Francesca. He asks her what led to her and Paolo’s damnation, and Francesca’s story strikes such a sympathetic chord within Dante that he faints out of pity.

In the years following Dante’s portrayal of Francesca, legends, and details about Francesca’s life began to be added to the story. One story stated that Francesca had been tricked into marrying Giovanni through the use of Paolo as a proxy.

Her father, fearing that Francesca would never agree to marry the disabled Giovanni, had supposedly sent for the much more handsome Paolo in Giovanni’s stead.

It wasn’t until the morning after the wedding that Francesca discovered the deception. This version of events, however, is very likely a later romantic embellishment of the story.

In the 19th century, the story of Paolo and Francesca inspired numerous theatrical, operatic, and symphonic adaptations, including “Francesca da Rimini: Symphonic Fantasy after Dante, Op. 32,” which is a symphonic poem by Tchaikovsky.

The Divine Comedy’s story about Francesca and her lover Paolo has captured the imagination of many artists over the years. Many paintings and several sculptures have been made featuring Francesca and her story.

The sculpture, “The Kiss” by Auguste Rodin, was initially titled Francesca da Rimini and depicted the 13th-century Italian noblewoman who falls in love with her husband’s younger brother Paolo.

Having fallen in love while reading the story of Lancelot and Guinevere, the couple is discovered and killed by Francesca’s husband. In the sculpture, the book can be seen in Paolo’s hand.

The lovers’ lips do not touch in the sculpture, suggesting that they were interrupted and met their demise without their lips ever having touched.

When critics first saw the sculpture in 1887, they suggested the less specific title “The Kiss,” which stuck. 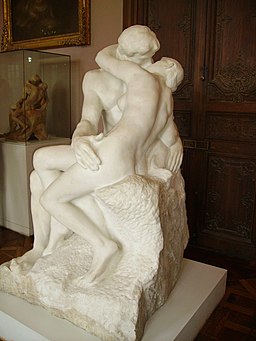 Initially conceived as Francesca and Paolo by Rodin, its name was later popularised as the “Kiss.”

William Dyce (1806 – 1864) was a Scottish artist who played a part in the formation of public art education in the United Kingdom and the South Kensington Schools system.

Dyce was associated with the Pre-Raphaelite Brotherhood and played a part in their early popularity.

Dyce is the figure in Scottish art most associated with the Pre-Raphaelites. He befriended the young Pre-Raphaelites in London and introduced their work to the influential art critic John Ruskin.

A Virtual Tour of the Kiss in Art

A Virtual Tour of the Scottish National Gallery

“The sound of a kiss is not so loud as that of a cannon, but its echo lasts a great deal longer.”
– Oliver Wendell Holmes, Sr.