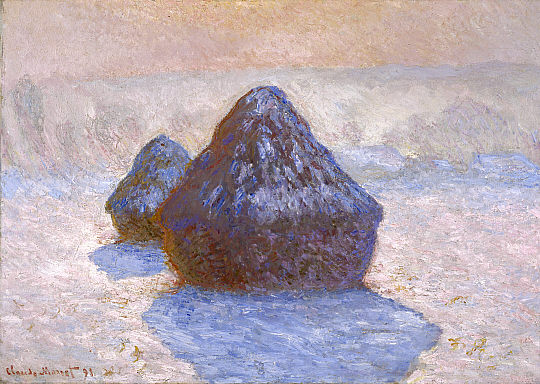 Haystacks by Claude Monet is part of a series of stacks of harvested wheat or barley and oats. The original French title, Les Meules à Giverny, means The Stacks at Giverny. The series consists of twenty-five canvas, which Monet began near the end of the summer of 1890, and though Monet also produced earlier paintings using this same stack subject. The impressionist series is famous for how Monet repeated the same theme to show the different light and atmosphere at different times of day, across the seasons, and in many types of weather. Monet’s Haystacks series is one of his earliest to rely on repetition of a subject to illustrate a subtle difference in color perception across variations of times of day, seasons, and weather.

Monet settled in Giverny in 1883, and most of his paintings from then until his death 40 years later were of scenes within 3 kilometers (2 mi) of his home. Monet was intensely aware of and fascinated by the visual nuances of the region’s landscape and by the endless variations in the days and the seasons. Monet’s painted various subjects in series under different lights and seasons focused on depictions of atmospheric influences.

Monet became increasingly fascinated by the seasonal effects and the color harmonies. Monet’s subject matter was carefully chosen and was the product of thought and analysis. Monet undertook to capture the Haystacks in direct sunlight and then to explore in his art the same viewpoint in the various light and atmospheric conditions. Sometimes Monet would search for harmonious transitions within the series and alter the canvases back in his studio. For Monet, the concept of producing and exhibiting a series of paintings related by subject and vantage point began in 1889, and his interest in the serial motif continued for the rest of his career.

Oscar-Claude Monet was a founder of French Impressionist painting, and the term “Impressionism” is derived from the title of his painting Impression, “Soleil Levant” or “Impression, Sunrise,” which was exhibited in 1874. Monet adopted a method of painting in which he painted the same scene many times to capture the changing of light and the passing of the seasons. Monet is known for having produced a series of paintings, all versions of the same subject and perspective. Examples include his series of the “Valley of the Creuse” series and his famous series of “Haystacks” and “Water Lilies” paintings.

From 1883 Monet lived in Giverny, where at his home, he developed a garden landscape that included the lily ponds that would become the subjects of his best-known works. In 1899 he began painting the water lilies, first with a Japanese bridge as a central feature, and later in the series of large-scale paintings, with the water lilies as the main feature. This series occupied him for the last 20 years of his life.

“The noblest pleasure is the joy of understanding.”
– Claude Monet