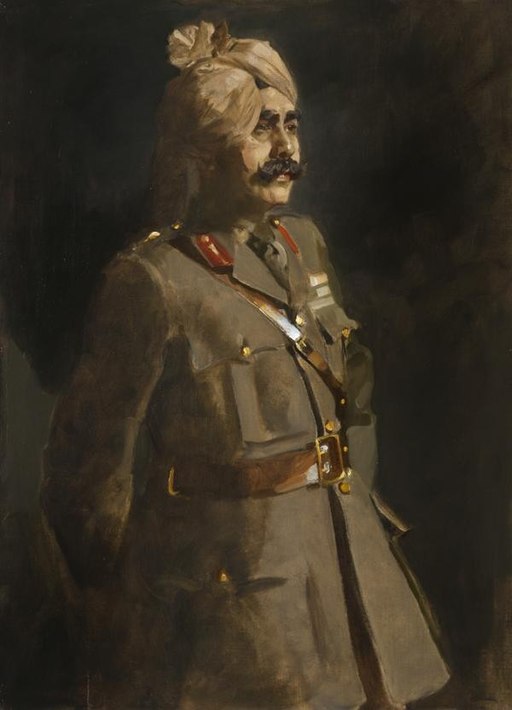 “Sri Ganga Singh Bahadur” by James Guthrie was the ruling Maharaja of the princely state of Bikaner, in present-day Rajasthan, India from 1888 to 1943.

As the only non-white member of the Imperial War Cabinet, he was present in the Palace of Versailles during The Signing of Peace in the Hall of Mirrors.

Sri Ganga Singhji Bahadur (1880 –  1943) succeeded his father at the age of seven and assumed full powers as a ruler at eighteen. He commanded the Bikaner Camel Corps as part of the British forces in China in 1901.

With the First World War outbreak in 1914, the Maharajah’s military career peaked. He was twice mentioned in dispatches and, by 1917, had been appointed Major-General in the British Army.

He was one of India’s three representatives at the Imperial War Cabinet of 1917 and the Peace Conference of 1919. In the peace years, he led the Indian delegations to the assemblies of the League of Nations.

Ganga Singh was Chancellor of the Indian Chamber of Princes from 1920–26. He also represented India as a delegate at the fifth session of the League of Nations in 1924. He is widely remembered as a modern reformist visionary.

Guthrie made this oil sketch in preparation for his great commission “Statesmen of the Great War.”

Maharajah Of Bikaner: A Royal Birthday (1946)