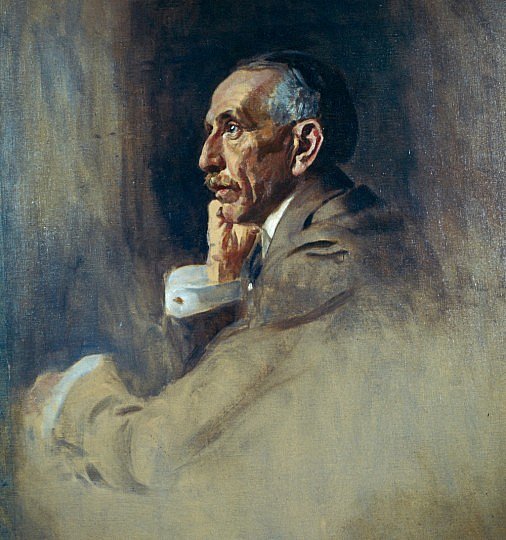 “William Morris Hughes” by James Guthrie depicts the Australian politician who served as the 7th Prime Minister of Australia, from 1915 to 1923. Hughes (1862 – 1952) was a parliament member from the Australian Federation in 1901 until his death.

Known as “Billy Hughes,” he is the only person to have served for more than 50 years in the Australian Parlament. He represented six political parties during his career, leading five, outlasting four, and being expelled from three.

Hughes was born in London to Welsh parents. He emigrated to Australia at the age of 22 and became involved in the labor movement.

Hughes combined his political career with part-time legal studies and was called to the bar in 1903. He was elected deputy leader of the Australian Labor Party in 1914.

Hughes became prime minister in late 1915, and the war was the dominant issue of the time. He supported sending conscripted troops overseas, an issue that caused a split within Labor ranks.

He and his supporters formed the Nationalist Party, and he was re-elected with large majorities in the 1917 and 1919 elections. He also made a significant impression on other world leaders at the 1919 Paris Peace Conference.

Hughes was one of the most influential Australian politicians of the 20th century. He was a controversial figure throughout his lifetime, and his legacy continues to be debated by historians.

The Labor Party considered him a traitor, while conservatives were suspicious of him. However, he was extremely popular among the general public, particularly ex-servicemen, who affectionately nicknamed him “the little digger.”

He continued to play an active role in Parliament until he died in 1952. Guthrie made this vibrant oil sketch to prepare his great commission “Statesmen of the Great War.”

It is a group portrait of seventeen figures, some seated and some standing. Guthrie painted a study of each subject separately; he held sittings between 1919 to 1921.