Prehistoric Petrosphere – Carved Stone Balls are spherical human-made objects made from stone. These ancient artifacts have been created by carving by up to up to 5200 years ago.

These carved stone balls dating from the Late Neolithic to as late as the Iron Age, are mainly found in Scotland, but also elsewhere in Britain and Ireland. They range from having no ornamentation apart from the knobs to extensive and highly varied engraved patterns.

They are usually round of reasonably uniform size at around 2.75 inches or 7 cm across. They can have from 3 to 160 protruding knob shapes on the surface. These carved stone balls are nearly all have been found in north-east Scotland, the majority in Aberdeenshire.

As portable objects, they are straightforward to transport and have been found on Iona, Skye, Harris, Uist, Lewis, Arran, Hawick, Wigtownshire, and fifteen from Orkney.

A similar distribution to that of Pictish symbols led to the early suggestion that carved stone balls are Pictish artifacts. However, examples have been found in Ireland and England.

Over 425 had been recorded. The British Museum holds a collection of over 30 carved balls from Scotland, Ireland, and northern England. Other collections can be found in the many museums in Scotland.

The lack of balls found in graves may indicate that they were not considered to belong to individuals. Several theories have been produced to explain their use or significance, but none has gained full acceptance.

Many of the balls have not had their discovery site recorded, and most are found as a result of agricultural activity. The lack of context has impacted rigorous interpretation; however, suggestion on their function has included:

Many of the late Neolithic stone balls have diameters differing by only a millimeter. This discovery has led to the suggestion that they might have been meant to be used together.

Plotting the find sites on a map shows that these petrospheres were often located in the vicinity of Neolithic recumbent stone circles.

Models have been created to show how using balls placed in a groove in parallel longitudinal pieces of wood ‘sleepers’ with a carrying board can be used effectively in the transportation of megalith boulders.

In archaeology, a petrosphere is a term for any spherical human-made object of any size that is composed of stone.

Several classes of petrospheres exist, such as:

These prehistoric artifacts may have been altered by significant efforts to perform their specific function. 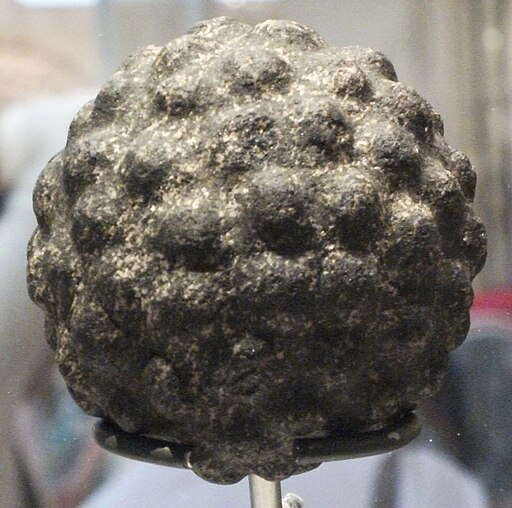 How To Make A Carved Stone Ball | Stone Age Technology