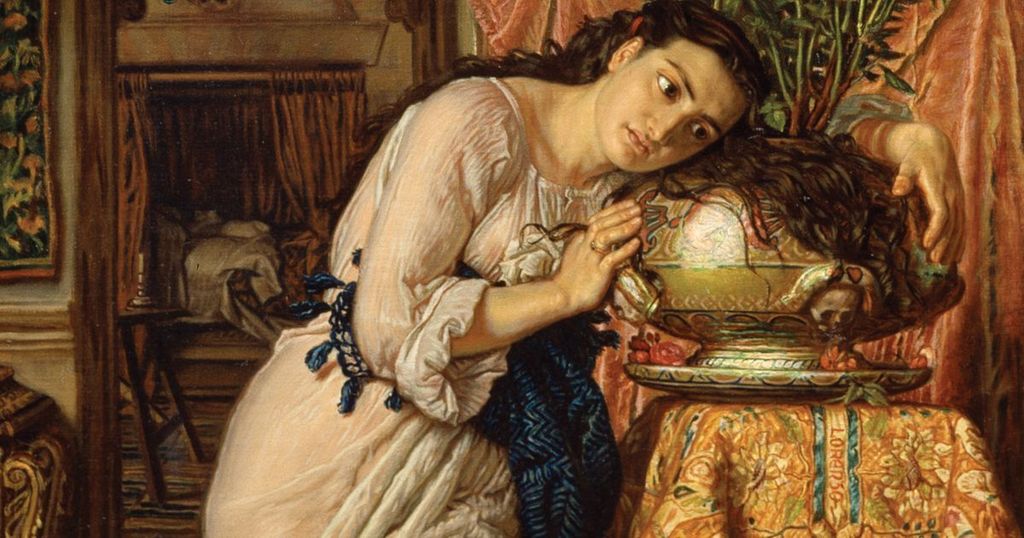 “Isabella and the Pot of Basil” by William Holman Hunt

This painting shows the heroine Isabella caressing the basil pot in which she had buried the severed head of her murdered lover Lorenzo. 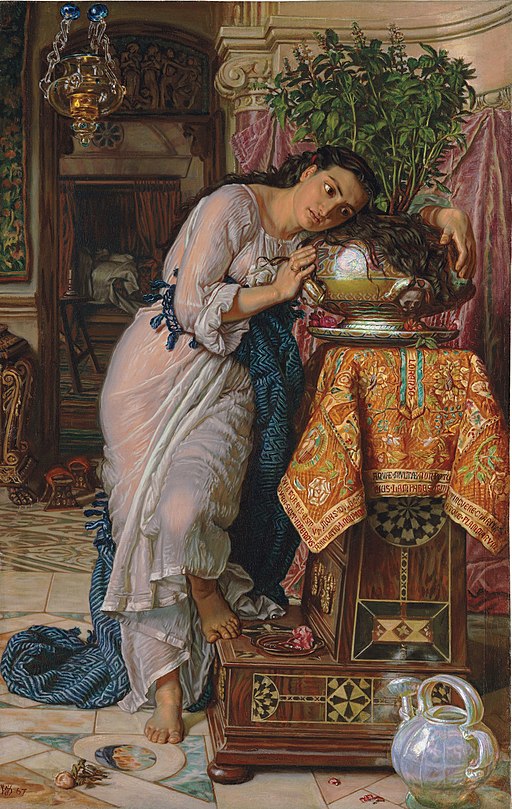 This painting portrays Isabella, unable to sleep, dressed in a nightgown. Her bed is visible with the cover turned over in the background through the doorway.

Isabella drapes herself over the altar she has created to Lorenzo on an elaborately inlaid prayer desk over which a richly embroidered cloth has been placed.

The grotesque styled majolica pot, decorated with skulls, holds Lorenzo’s head, which has been interred in the pot.

Her long hair flows over the pot and around the plant, as she:

“hung over her sweet Basil evermore,
And moistened it with tears unto the core.”

Having traveled with his pregnant wife Fanny to Italy, Hunt began work on the painting in Florence. However, after giving birth, Fanny died from fever in late 1866.

Hunt turned this painting into a memorial to his wife, using her features for Isabella. He worked on it steadily in the months after her death, returning to England and finally completing it in 1868.

“FAIR Isabel, poor simple Isabel!
Lorenzo, a young palmer in Love’s eye!
They could not in the self-same mansion dwell.
Without some stir of heart, some malady;
They could not sit at meals but feel how well.
It soothed each to be the other by;
They could not, sure, beneath the same roof sleep.
But to each other dream, and nightly weep.”

Isabella or the Pot of Basil (1818) is a narrative poem by John Keats adapted from a story in Boccaccio’s Decameron.

The poem is set in the Middle Ages and was published in 1820. The poem was popular with Pre-Raphaelite painters, who illustrated several episodes from it, including:

William Holman Hunt (1827 – 1910) was an English painter and one of the founders of the Pre-Raphaelite Brotherhood. His paintings were notable for their incredible attention to detail, vivid color, and symbolism.

Isabella and The Pot of Basil

Isabella: or, The Pot Of Basil

Isabella Or The Pot of Basil – Film

“Isabella and the Pot of Basil” by William Holman Hunt

“With every morn, their love grew tenderer,
With every eve deeper and tenderer still.”
– Isabella by John Keats