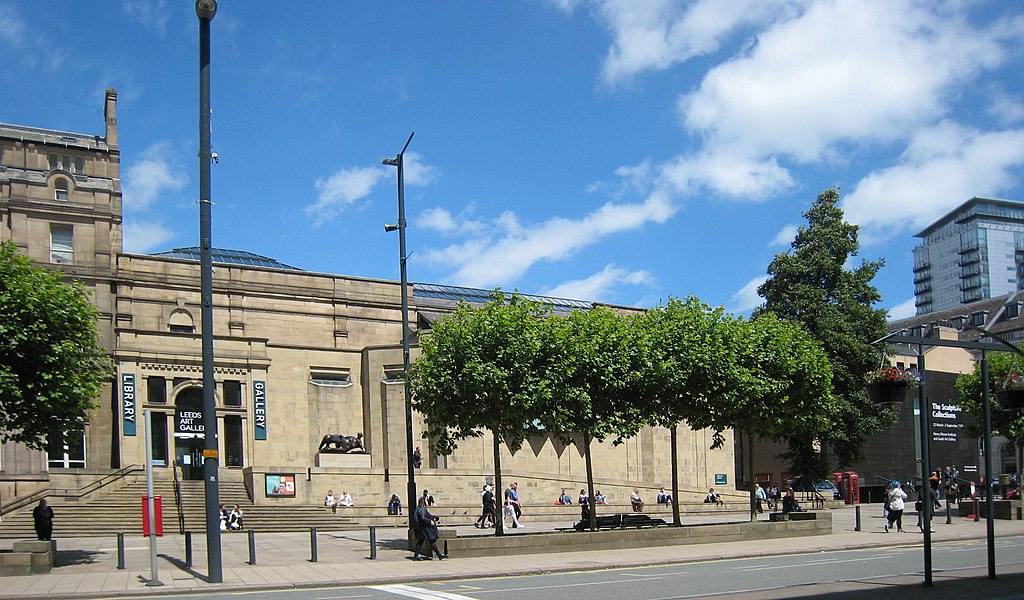 Leeds Art Gallery collection includes 19th-century and earlier artworks as well as 20th-century British Art. It is linked to Leeds Central Library and to the Henry Moore Institute, with which it shares some sculptures.

A Henry Moore sculpture, Reclining Woman: Elbow (1981), stands in front of the entrance.

In front of the gallery is Victoria Square, which is often used for rallies and demonstrations because of the speakers’ dais provided by the raised entrance to the gallery.

A Virtual Tour of the Leeds Art Gallery

Highlights of the Leeds Art Gallery

Scotland Forever! by Elizabeth Thompson depicts the start of the charge of the Royal Scots Greys, a British cavalry regiment that charged alongside the British heavy cavalry at the Battle of Waterloo in 1815.

The title comes from the battle cry of the soldiers who called “Now, my boys, Scotland forever!” as they charged.

Butler had never observed a battle; however, she did watch her husband’s regiment during training maneuver, and she positioned herself in front of charging horses to study their movement.

The painting has highly popular and was reproduced many times and is considered an iconic representation of the battle itself and heroism more generally.

Tzar Nicholas II of Russia and Kaiser Wilhelm II of Germany both received copies, and later during the First World War, both the British and the Germans used the image in their propaganda material, with the Scots Greys transformed into Prussian cavalry by the Germans.

“The Bridesmaid” by James Tissot

“The Bridesmaid” by James Tissot is an example of the Fashion in Art by this famous painter of fashionably dressed women.

James Tissot was a French painter and illustrator who left Paris after the Franco-Prussian War and resided in London from 1871.

Late in his career, Tissot had a revival of his Catholic faith, which led him to spend the last fifteen years of his life painting Biblical events.

“Ulysses and the Sirens” by Herbert James Draper depicts an episode in the epic poem Odyssey by Homer in which the voices of Sirens torment Ulysses.

Although there are only two Sirens in Homer’s poem and they stay onshore, the painting shows Ulysses tied to the mast and forcibly attracted to three Sirens’ seductions.

Although the Sirens were depicted in ancient Greek art as ugly creatures, Draper, as with most modern artists, has transferred the Sirens’ seductiveness from their song to a visible form.

Tour of The History of Leeds Art Gallery