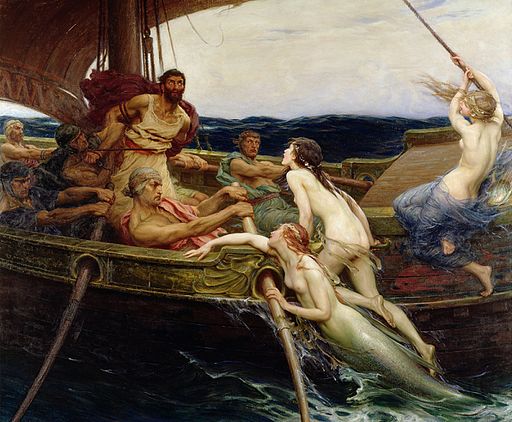 “Ulysses and the Sirens” by Herbert James Draper depicts an episode from the epic poem Odyssey by Homer in which the voices of Sirens torment Ulysses.

Although there are only two Sirens in Homer’s poem and they stay onshore, this painting shows Ulysses tied to the mast and forcibly attracted to three Sirens’ seductions.

The Sirens were traditionally depicted in ancient Greek art as ugly creatures; however, as with most modern artists, Draper has transferred the Sirens’ seductiveness from their song to a visible form.

The conflation of Sirens with mermaids and the sexualization of the Sirens is consistent with other artwork of the Victorian and Edwardian eras.

Draper also painted a reduced replica that is housed at the Leeds Art Gallery. 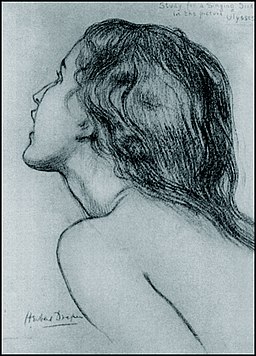 Ulysses is the legendary Greek king of Ithaca and the hero of Homer’s epic poem the Odyssey. Ulysses also plays a key role in Homer’s Iliad.

In the Odyssey, Ulysses has to endure ten years of adventures before returning home to Ithaca after the Trojan War. On the way home from Troy, one of the significant incidences is his encounter with the Sirens.

Homer is the presumed author of the Iliad and the Odyssey, two epic poems that are the foundational works of ancient Greek literature.

The Iliad is set during the Trojan War, the ten-year siege of Troy by a Greek coalition.

The Odyssey focuses on the ten-year journey home of Odysseus after the fall of Troy. Modern scholars consider these accounts legendary.

Many accounts of Homer’s life have come down to us from classical antiquity, the most widespread being that he was a blind bard.

Academic opinions are split as to whether the works are of a single poet of genius or the result of a process of working and reworking by many contributors, and that “Homer” is a label for an entire tradition.

It is generally accepted that the poems were composed around the late eighth or early seventh century BC.