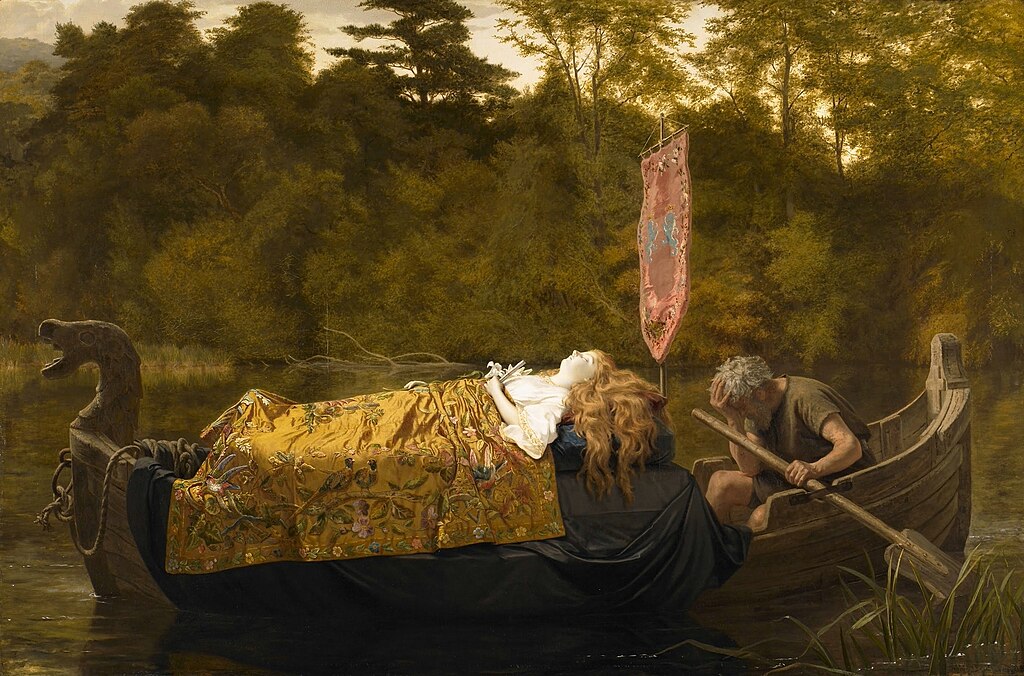 “Elaine” by Sophie Gengembre Anderson depicts a mournful servant rowing Elaine’s body to King Arthur’s palace at Camelot. This painting is based on a poem by Lord Tennyson, which tells the story of Elaine, who falls in love with Sir Lancelot.

Elaine is a name shared by several different female characters in the Arthurian legends. Elaine, in this painting, is “Elaine of Astolat,” she has become in modern times, better known as “The Lady of Shalott.”

She is one of the many ladies that die of heartbreak due to their unrequited love of Lancelot.

English poet Alfred Tennyson (1809–1892) lyrical ballad is based on the tale of Elaine of Astolat, a young noblewoman living in a tower on an island near Camelot.

One of Tennyson’s best-known works, its rich medieval romanticism, and enigmatic symbolism, inspired many painters. Tennyson wrote two versions of the poem, one published in 1833, the other in 1842.

The revised version has a significantly different ending. This new revision was designed to match Victorian morals regarding gender norms and the act of suicide.

Tennyson’s poetry also had a significant influence on the Pre-Raphaelite Brotherhood. “The Lady of Shalott” was incredibly popular with the Brotherhood, which shared Tennyson’s interest in Arthurian legends.

Several of the Brotherhood made paintings based on episodes from the poem.

Lancelot was one of the most famous Knights of the Round Table, in the Arthurian legends, and an object of desire by many ladies.

Faithful to Queen Guinevere, he refuses the forceful advances of Queen Morgan le Fay, Arthur’s enchantress sister continually attempting to seduce Lancelot, whom she at once loves and hates with the same intensity.

Another sorceress, Hellawes, wants him for herself so obsessively that, failing in having him either dead or alive, she soon herself dies from sorrow.

Lancelot typically features as King Arthur’s greatest companion, the greatest swordsman, and jouster of the age.

However, his adulterous affair with King Arthur’s wife, Queen Guinevere, causes a civil war that is exploited by the King’s enemies to bring about the end of Arthur’s kingdom.

Sophie Gengembre Anderson (1823 – 1903) was a French-born British artist who specialized in genre painting of children and women, typically in rural settings.

This painting, “Elaine,” was the first public collection purchase of a woman artist. Anderson broke the barrier for women artists in 1870 by creating this grand history pictures.

Today, Anderson’s work is in the collection of numerous museums and galleries, mainly in the United Kingdom.