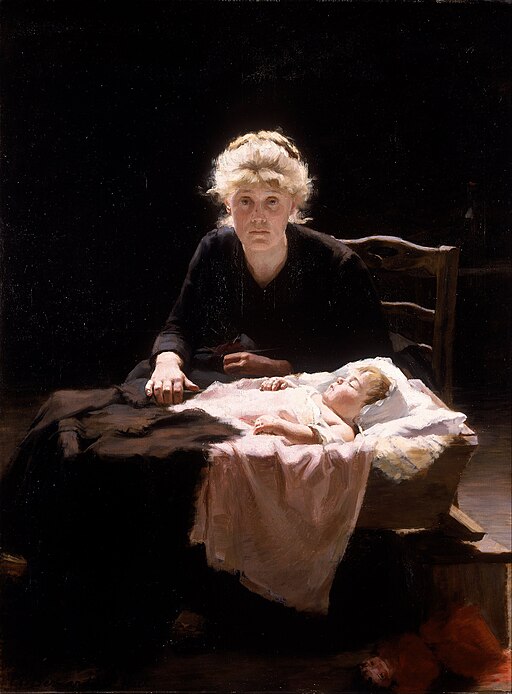 Fantine was a beautiful Parisian working-class girl who was very much in love with a man who eventually abandons her, treating their romantic relationship as youthful amusement.

Fantine is forced to draw on all her meager resources to care for her illegitimate daughter, Cosette. Hall painted this picture in 1886, a year after Victor Hugo’s death, while she was in Paris.

Hall’s picture shows Fantine in her despair as a mother who contemplates how she will support her daughter. The mother’s and baby’s clothing, the cradle’s blankets, and the dark bare room all point to their financial constraints.

In the ‘Les Miserables’ novel, Fantine, for financial reasons, is forced to leave Cosette in the care of a corrupt innkeeper and his selfish, cruel wife while she goes to another town for work.

Fantine is unaware that they are abusing her daughter and using her as forced labor for their inn as she continues to try to meet their growing fictitious financial demands.

She is later fired from her job at Jean Valjean’s factory. She was let go because of the discovery that her daughter was born out of wedlock.

Meanwhile, the innkeeper’s monetary demands continue to grow. In desperation, Fantine sells her hair and two front teeth, and she resorts to prostitution to pay for her daughter’s upkeep. Fantine is slowly dying from an unspecified disease.

Jean Valjean, the novel’s hero, befriends Fantine, for whom he feels responsible because it was his factory that turned her away. Hence, he promises Fantine that he will bring her daughter Cosette to her hospital bed.

When Valjean is unable to keep his promise to bring Cosette to her, Fantine, weakened by her illness, falls into shock and dies. Valjean promises the dying Fantine that he will rescue Cosette and takes full responsibility for her care.

The rest of the novel tells how Valjean escapes his challenging background to save Cosette and keep his promise to Fantine to raise and care for her daughter.

Fantine was a popular archetype figure in late 19th-century art. While not a respected member of society, she was nonetheless revered for her devotion as a mother. She was also symbolic of the unfair treatment to which women of the era were subjected. 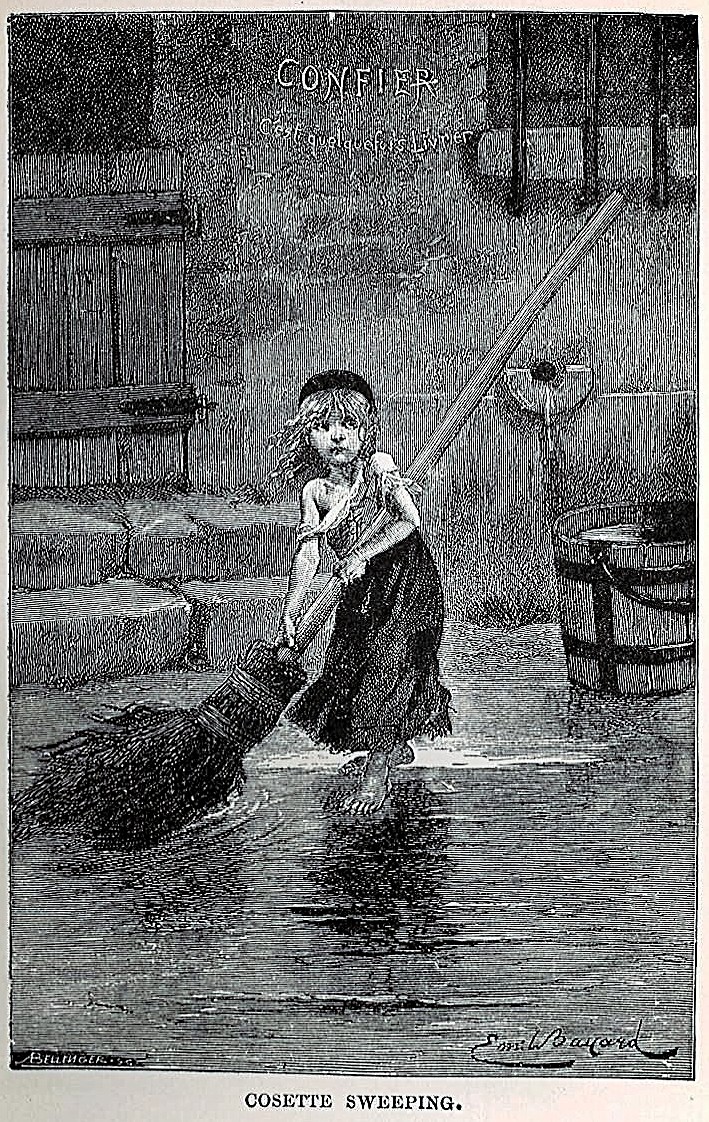 Les Misérables is a French historical novel by Victor Hugo, published in 1862, that is considered one of the greatest books of the 19th century.

Beginning in 1815 and culminating in the 1832 June Rebellion in Paris, the story follows several characters’ lives, particularly the struggles of ex-convict Jean Valjean and his redemption.

The novel examining the nature of law and grace and elaborates on the history of France. It examines the politics, justice, religion, and the nature of romantic and familial love. Les Misérables has been popularised through numerous adaptations for film, television, and a musical.

Margaret Bernadine Hall (1863 – 1910) was an English painter who spent most of her career in Paris. Most of Hall’s paintings have disappeared or not survived.

After this painting, between 1888 and 1894, Hall traveled extensively to countries including Japan, China, Australia, North America, and North Africa, returning to Paris in 1894.

Explore Women in the Arts

Fantine is abandoned with baby Cosette

“To love another person is to see the face of God.”
– Victor Hugo, Les Misérables