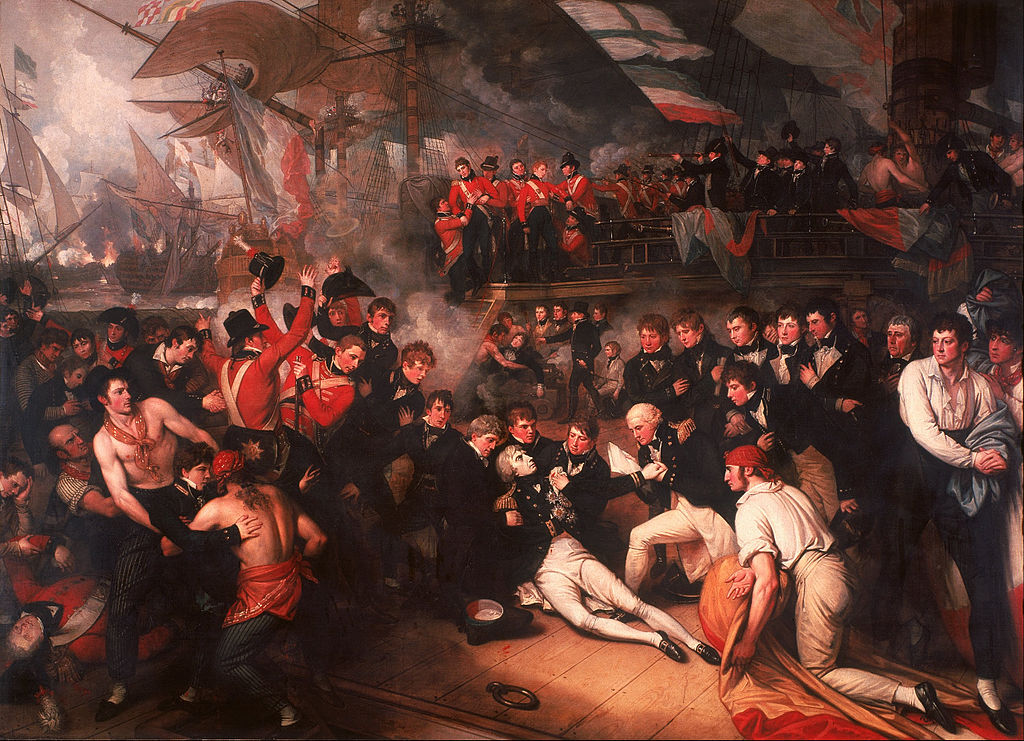 “The Death of Nelson” by Benjamin West

“The Death of Nelson” by Benjamin West depicts the last moments of Horatio Nelson during the Battle of Trafalgar on the deck of HMS Victory, where a French sharpshooter fatally wounded him.

Nelson’s death at Trafalgar secured his position as one of Britain’s most heroic figures. The significance of the victory and his death during the battle led to his signal, “England expects that every man will do his duty,” becoming famous.

The Battle of Trafalgar in 1805 was a naval engagement fought by the British Royal Navy against the combined fleets of the French and Spanish Navies during the War of the Third Coalition of the Napoleonic Wars (1803–1815).

The Franco-Spanish fleet lost twenty-two ships, and the British lost none.

In 1770, West had painted “The Death of General Wolfe.” It was not an accurate representation of the event, but rather an idealization, and it included people who were not present at the event.

In 1801, West met Horatio Nelson, who told him how much he admired the painting of Wolfe, and asked why he had not produced any more similar pictures. West replied that he had found no subject of comparable notability.

Nelson then expressed the desire that he would like to be the subject of West’s next similar painting.

When Nelson was killed in the Battle of Trafalgar, West created this painting within six months of his death. West took considerable trouble to ensure the accuracy of this painting.

He based many of the portraits on over 50 survivors of the battle. However, he produced, as he admitted himself, a picture “of what might have been, not of the circumstances as they happened.”

West created two more paintings with Nelson as the subject, The Death of Lord Nelson in the Cockpit of the Ship “Victory” and The Immortality of Nelson.

This painting proved as popular as “The Death of General Wolfe.” When West exhibited this painting in his studio, within just over a month, it was seen by 30,000 members of the public.

Vice-Admiral Horatio Nelson, 1st Viscount Nelson, (1758 – 1805) was a British flag officer in the Royal Navy. He is famous for his inspirational leadership, strategy, and unconventional tactics.

He won several decisive British naval victories against the French during the Napoleonic Wars. He was wounded several times in combat, losing the sight in one eye at the age of 36, as well as most of one arm when 40 years of age.

Nelson was shot and killed at the age of 47 during his final victory at the Battle of Trafalgar near the Spanish port city of Cádiz in 1805.

After his death, Nelson’s body was placed in a cask of rum mixed with camphor and myrrh, which was then lashed to the Victory’s mainmast and placed under guard. The victory was towed to Gibraltar after the battle.

The news of Nelson’s death saddened all of England. The Times reported:

“We do not know whether we should mourn or rejoice.
The country has gained the most splendid and decisive Victory
that has ever graced the naval annals of England;
but it has been dearly purchased.”

In England, Nelson’s body was unloaded and conveyed upriver to Greenwich and lay in state in the Painted Hall at Greenwich for three days.

The funeral procession consisting of 32 admirals, over a hundred captains, and an escort of 10,000 soldiers who took the coffin from the Admiralty to St Paul’s Cathedral. After a four-hour service, he was interred in the crypt within a sarcophagus.

Many monuments and memorials were constructed across the country, and abroad, to honor his memory and achievements. London’s Trafalgar Square was created in his memory in 1835, and the centerpiece, Nelson’s Column, finished in 1843.

The Death of General Wolfe became one of the most frequently reproduced images of the period. West became known for his history paintings, which used expressive figures, colors, and compositional schemes to help the spectator to identify with the scene represented.

He impressed King George III and was mostly responsible for the launch of the Royal Academy, of which he became the second president after Sir Joshua Reynolds. He was appointed historical painter to the court and Surveyor of the King’s Pictures.

He was offered a knighthood but declined it, believing that he should instead be made a peer. West died in London and was buried in St Paul’s Cathedral.

The Death of Nelson

Explore of the Walker Art Gallery

Benjamin West – The Death of Nelson

“England expects that every man will do his duty.”
– Horatio Nelson