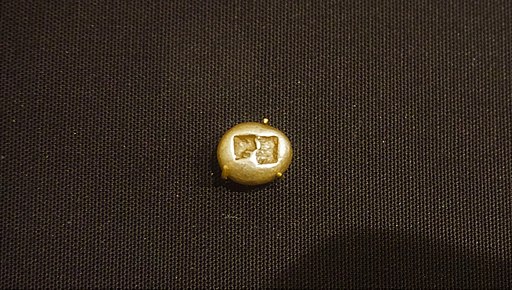 Electrum Gold Coin from Lydia, 650 BC

This Electrum Gold Coin from Lydia, dated to 650 BC, represents the first coins from the ancient kingdom of Lydia (today in modern Turkey). They were made of Electrum, which is a naturally occurring alloy of gold and silver.

The ancient Greeks called it ‘gold’ or ‘white gold’ instead of ‘refined gold.’ Its color ranges from pale to bright yellow, depending on the proportions of gold and silver.

Ancient Lydia was famous for its god that was found in the sands of the River Pactolus.

Gold objects and metal ore were used in commerce in the Ancient Near East since the Bronze Age, but gold coins originated later, during the 6th century BC, in Anatolia.

The name of King Croesus of Lydia remains associated with the invention. The gold content of naturally occurring electrum in modern Western Anatolia ranges from 70% to 90%, in contrast to the 45–55% of gold in electrum used in the ancient Lydian coinage of the same geographical area.

Although irregular in size and shape, these early electrum coins were minted according to a strict weight-standard.

In 546 BC, Croesus was captured by the Persians, who adopted gold as the primary metal for their coins.

The Ying yuan is an early gold coin minted in ancient China with the oldest known from about the 5th or 6th century BC. 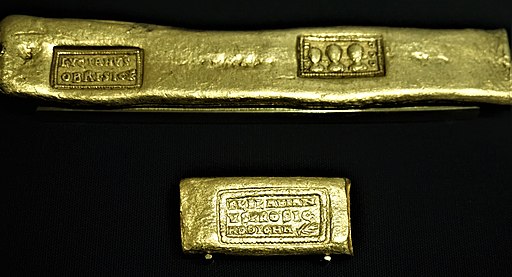 These Roman Gold Bars from 375 AD represent the few Roman gold cars to survive. Most were melted down for coinage. These were discovered as part of a hoard buried in the late 4th century, for safe-keeping. The hoard was found in Czofalva, Hungary,

The owners never collected them, and the cache lay undiscovered until they were found in 1887. These Gold currency-bar stamped with rectangular stamps record the name of the procurator, and sometimes the name of the assayer.

The type of money introduced by Rome was unlike that found elsewhere in the ancient Mediterranean; it combined several unique elements.

Bullion consisting of metal currency bars were more common in the Roman Empire and had been produced right up to its decline.

One of the reasons was to make sure the continued purity of the gold coinage. In 367 AD, the emperors ordered all gold coins paid in tax to be melted down into bars before being turned back into coin.

The Roman adoption of metallic commodity money was a late development in monetary history. Bullion bars and ingots were used as money in Mesopotamia since the 7th millennium BC.

The Greeks in Asia Minor had pioneered the use of coinage as early as the 7th century BC. Coinage proper was only introduced by the Roman Republican government c. 300 BC. 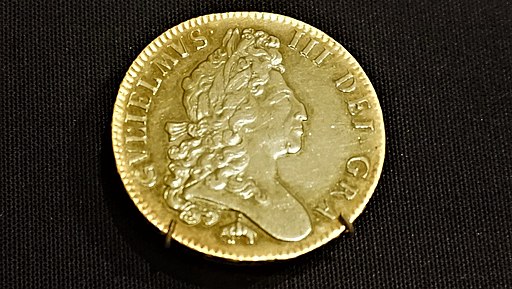 This William III Five Guinea Coin from 1699 was made of gold, which had come from the Guinea region in West Africa, which gave the coins their name. The origin of the gold as indicated by the tiny elephant beneath the portrait of the King.

The first guinea was produced in 1663, and the denomination was originally worth one pound, or twenty shillings. An increase in the price of gold during the reign of King Charles II led to the market trading it at a premium.

The cost of gold continued to increase, especially in times of trouble, and by the 1680s, the coin was worth 22 shillings.

The guinea was a coin of about one-quarter ounce of gold minted in Great Britain between 1663 and 1814. “Guinea” was not an official name for the coin, but as most of the gold for the early coins came from Guinea in Africa, the name stuck.

The elephant, with or without the castle, symbolizes the Royal African Company, founded in 1660, whose activities on the Guinea Coast of Africa resulted in the importation of much gold into England.

The guinea was the first English machine-struck gold coin, originally worth one pound sterling, equal to twenty shillings.

Still, rises in the price of gold relative to silver caused the value of the guinea to increase, at times to as high as thirty shillings. From 1717 to 1816, its value was officially fixed at twenty-one shillings.

When Britain adopted the gold standard, the guinea became a colloquial term.

Although the coin itself no longer circulated, the term “guinea” survived as a unit of account in some fields. Notable usages included professional fees, which were often invoiced in guineas, and horse racing and greyhound racing, and the sale of rams.

A guinea meant an amount of one pound and one shilling (21 shillings), or one pound and five pence (£1.05) in decimalized currency.

“As every thread of gold is valuable, so is every moment of time.”
– English Proverb

“If speaking is silver, then listening is gold.”
– Turkish Proverb

“Where gold speaks, every tongue is silent.”
– Italian Proverb

“Real gold is not afraid of the melting pot.”
– Chinese Proverb

“All the gold which is under or upon the earth is not enough to give in exchange for virtue.”
– Plato

‘Gold is money. Everything else is credit.”
– J. P. Morgan

‘Gold loves to make its way through guards and breaks through barriers of stone more easily than the lightning’s bolt.”
– Horace

“More gold has been mined from the thoughts of men than has been taken from the earth.”
– Napoleon Hill

“We Spaniards know a sickness of the heart that only gold can cure.”
– Hernán Cortés

‘Hunger for gold is made greater as more gold is acquired.”
– Aurelius Clemens Prudentius

“O Zeus, why is it you have given men clear ways of testing whether gold is counterfeit but, when it comes to men, the body carries no stamp of nature for distinguishing bad from good.”
– Euripides