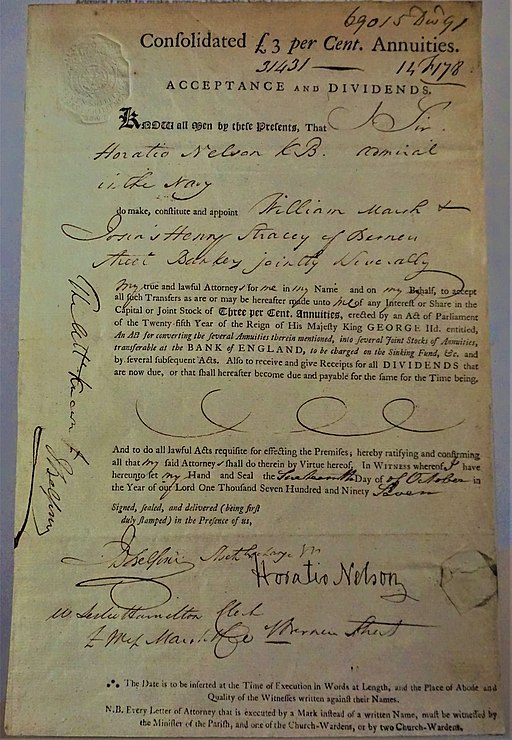 This Power of Attorney was drafted and signed by Lord Nelson on 17th October 1797, giving his permission to a third party to administer his investments in the Bank of England.

This document is dated a few months after Nelson lost his right arm in the Battle of Santa Cruz de Tenerife. The shaky signature ‘Horatio Nelson’ was written with his left hand, which he had not yet trained to sign his name.

He was noted for his inspirational leadership, naval strategy, and unconventional tactics, which together resulted in many decisive British naval victories, particularly during the Napoleonic Wars.

He was wounded several times in combat, losing the sight in one eye in Corsica at the age of 36, as well as most of one arm in the unsuccessful attempt to conquer Santa Cruz de Tenerife when 40 years of age.

He was shot and killed at the age of 47 during his final victory at the Battle of Trafalgar near the Spanish port city of Cádiz in 1805.

The battle plan for Santa Cruz de Tenerife required a combination of naval bombardments and an amphibious landing. Several of the boats failed to land at the correct positions, while those that did were swept by gunfire and grapeshot.

Nelson’s boat reached its intended landing point, but as he stepped ashore, he was hit in the right arm by a musket-ball, which fractured his humerus bone in multiple places.

He was rowed back to his ship Theseus to be attended to by the surgeon. On arriving at his ship, he refused to be helped aboard, declaring, “Let me alone! I have got my legs left and one arm.”

He instructed the surgeon to prepare his instruments, and “the sooner it was off, the better.” Most of the right arm was amputated, and within half an hour, Nelson had returned to issuing orders to his captains.

He sometimes would excuse himself for not writing longer letters due to not being naturally left-handed.

He developed the sensation of a phantom limb in his lost arm later on and declared that he had “found the direct evidence of the existence of a soul.”

A power of attorney is a written authorization to represent or act on another’s behalf in private affairs, business, or other legal matters.

The person authorizing the other to act is the principal of the power. The one empowered to act is the agent or the attorney-in-fact.

Historically, the term “power” referred to an instrument signed under seal and witnessed, as illustrated in Lord Nelson’s Power of Attorney, which was deposited with the Bank of England for safekeeping.

Explore the Bank of England Museum

“My character and good name are in my own keeping. Life with disgrace is dreadful. A glorious death is to be envied.”
– Horatio Nelson