This Running Cash Note is dated 18th June 1697 and represents a deposit of £22; this is the earliest known running cash note. It is entirely handwritten.

At the first meeting of the Bank of England’s Court of Directors, they considered how the Bank would deal with the issue of notes. They decided that the deposit of coins would be acknowledged in three different ways:

It soon became apparent that the Running Cash Note was the most popular, and the Bank determined that it was essential for its business. It was the success of Running  Cash notes that led to the introduction of the banknote that we know today. 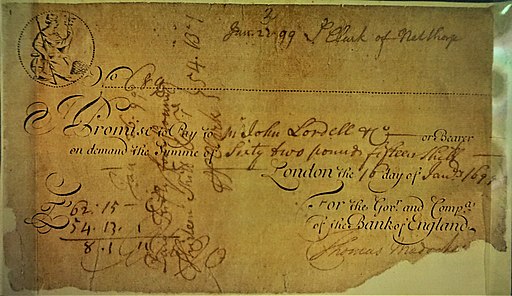 This Running Cash Note is dated 16th January 1699 and is partly printed and incorporates an image of a medallion of Britannia. It was payable to John Lordell, who withdrew £54-13s-1d four days after making an initial deposit of £62-15s-1s. It is signed by the Bank’s 3rd Cashier, Tomas Modockes. 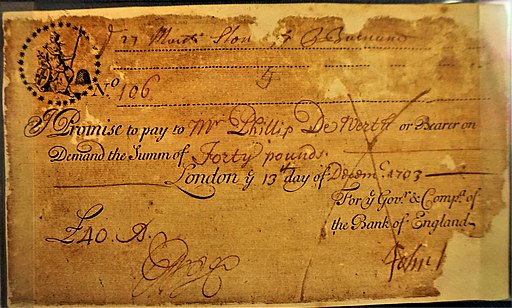 This Running Cash Note is dated 13th December 1703 for £40 and was payable to Phillip De Werth and signed by John Wase. It was printed with a printing plate engraved by John Sturt, who is today mainly remembered for his ‘Book of Common Prayer,’ published in 1717, which was printed from engraved silver plates.

The Bank of England. Established in 1694, gradually moved to the issuance of fixed denomination notes, and by 1745, standardized printed notes ranging from £20 to £1,000 were being printed. In 1855 fully printed notes were issued that did not need the name of the payee and the cashier’s signature.

A banknote was often known as a bill, paper money, or merely note is a type of negotiable promissory note made by a bank, payable to the bearer on demand. Banknotes were initially issued by commercial banks, which were legally required to redeem the notes for legal tender, usually, gold or silver coins when presented to the chief cashier of the originating bank. These commercial banknotes only traded at face value in the market served by the issuing bank. National notes issued by central banks have primarily replaced commercial banknotes.

The first bank to start the permanent issue of banknotes was the Bank of England. Established in 1694 to raise money for the funding of the war against France, the bank began issuing notes in 1695 with the promise to pay the bearer the value of the note on demand. They were initially handwritten to a precise amount and issued on deposit or as a loan.

Historically, banks ensured that they could always pay customers in coins when they presented banknotes for payment. This practice of backing notes with something of substance is the basis for the history of central banks backing their currencies in gold or silver. Today, most national currencies have no backing in precious metals or commodities and have value only by fiat.

Fiat money is a currency without intrinsic value that has been established as money, often by government regulation. Fiat money does not have use value and has value only because a government maintains its value, or because parties engaging in exchange agree on its value. It was introduced as an alternative to commodity money and representative money.

Fiat money is any money declared by a government to be legal tender that serves as a medium of exchange. The term fiat derives from the Latin fiat “let it be done” used in the sense of an order or resolution.

“A wise person should have money in their head, but not in their heart.”
– Jonathan Swift