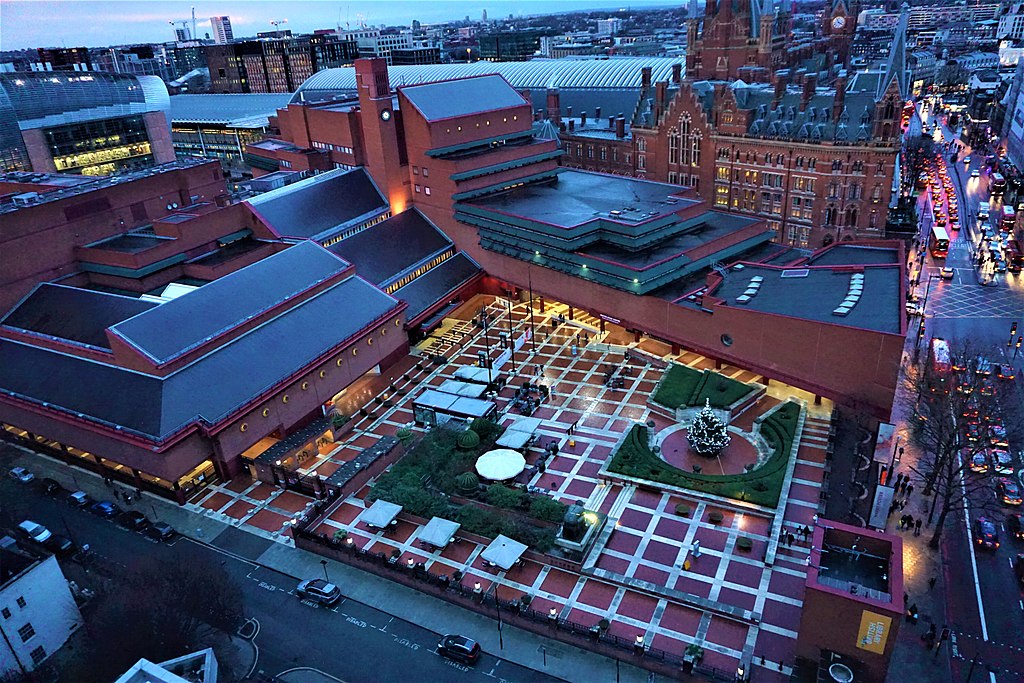 The British Library is the national library of the United Kingdom and the most extensive library in the world.

As a legal deposit library, the British Library receives copies of all books produced in the United Kingdom and Ireland, including a significant proportion of overseas titles distributed in the UK.

The British Library holds over 170 million items from many countries.

The Library’s collections include substantial holdings of manuscripts and historical items dating back as far as 2000 BC. Before 1973, the Library was part of the British Museum.

The Library is now located in a purpose-built building on Euston Road in St Pancras, London.

Highlights Tour of the British Library

Theatrum Orbis Terrarum, which is Latin for “Theatre of the Orb of the World,” is considered to be the first real modern atlas.

Compiled by Abraham Ortelius in 1570 in Antwerp, it consisted of a collection of uniform maps and supporting text bound to form a single book.

Constitution of the Athenians by Aristotle

This “Constitution of the Athenians” is a copy of the original writings of Aristotle or one of his students. It was preserved on two leaves of a papyrus codex discovered at Oxyrhynchus, Egypt, in 1879.

The codex describes the political system of Classical Athens, commonly called the Areopagite Constitution, written between 328 BC and 322 BC.

The work deals with the different forms of the constitution and the city’s institutions, including the terms of access to citizenship, magistrates, and the courts.

In other ancient documents, several ancient authors state that Aristotle assigned his pupils to prepare a monograph of 158 constitutions of Greek cities, including a constitution of Athens.

“Newton after Blake” by Eduardo Paolozzi

Beowulf is an Old English epic poem that survives in a single copy in the manuscript known as the Nowell Codex. It has no title in the original manuscript but has become known by the name of the story’s hero.

The poem is known only from a single manuscript, which is estimated to date from around 975–1025, in which it appears with other works.

The earliest surviving reference to the Nowell Codex was made about 1650 and the prior ownership of the codex before Nowell remains a mystery.

“The History of England” by Jane Austen

“The History of England” by Jane Austen was written when the author was fifteen years old in 1791.  The work is a humorous work that pokes fun at widely used school history books of the time.

The manuscript of thirty-four pages in Jane Austen’s hand is accompanied by thirteen watercolor miniatures by her elder sister, Cassandra. The notebook is today preserved in the British Library collection.

In “The History of England,” Austen mockingly imitates the style of textbook histories of English monarchs, while ridiculing school history books’ pretensions to objectivity.

Jane Austen’s version of “The History of England” rebalanced the insufficiency of attention to female figures in school history books.

Some years later, Austen compiled this work and 28 other writings of her early compositions by copying them into three notebooks, which she called “Volume the First,” “Volume the Second,” and “Volume the Third.”

These notebooks still exist, one in the Bodleian Library and the other two in the British Library. These three volumes are considered Austen’s Juvenilia.

The original manuscript copy of “Alice’s Adventures Under Ground,” from 1864 is preserved in the British Library.

The manuscript is written in sepia-colored ink and includes 37 pen and ink illustrations and a colored title page. The original drawings were only uncovered in 1977.

Alice’s Adventures in Wonderland was created by Lewis Carroll, which was the pseudonym of Charles Dodgson. Charles Lutwidge Dodgson (1832 – 1898) is better known by his pen name Lewis Carroll.

The story first developed when Dodgson, together with his friend Reverend Duckworth, rowed in a boat accompanied by three young girls.

The three girls were the daughters of another friend Henry Liddell, and one of the girls was named Alice.

The journey on a river in Oxford was five miles long, and during the trip, Dodgson created for the girls a story that featured a bored little girl named Alice who goes looking for an adventure.

The girls loved it, and Alice begged Dodgson to write it down for her. Dodgson began writing the manuscript of the story the next day.

Inside the British Library 360 views

Charles Darwin and the London Library

“The only thing that you absolutely have to know, is the location of the library.”
– Albert Einstein

“Your library is your paradise.”
– Erasmus

“An original idea. That can’t be too hard. The library must be full of them.”
– Stephen Fry

“When a man wants to write a book full of unassailable facts, he always goes to the British Museum.”
– Anthony Trollope

“I have always imagined that Paradise will be a kind of library.”
– Jorge Luis Borges

“We may sit in our library and yet be in all quarters of the earth.”
– John Lubbock

“I ransack public libraries and find them full of sunk treasure.”
– Virginia Woolf

“Second-hand books are wild books, homeless books;
they have come together in vast flocks of variegated feather,
and have a charm which the domesticated volumes of the library lack.”
– Virginia Woolf

“People can lose their lives in libraries. They ought to be warned.”
– Saul Bellow

“A library is a place where you can lose your innocence without losing your virginity.”
– Germaine Greer

“When I have a house of my own, I shall be miserable if I have not an excellent library.”
– Jane Austen, Pride and Prejudice

A Virtual Tour of London’s Museums

Inside The London Library

“How often have I said that when you have excluded the impossible whatever remains,
however improbable, must be the truth.”
– Sherlock Holmes