Sometime in the second half of the 10th century, a monk named Aldred added an Anglo-Saxon (Old English) gloss to the Latin text, producing the earliest surviving Old English copies of the Gospels.

The Gospels are richly illustrated in the insular style and were initially encased in a beautiful leather treasure binding covered with jewels and metals. 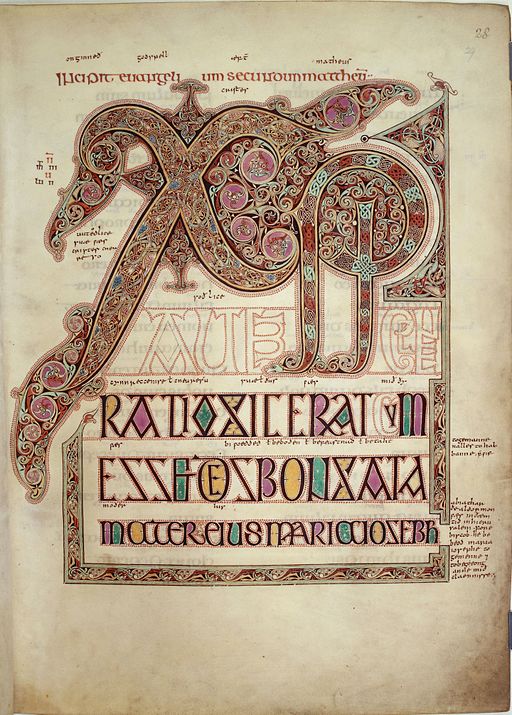 Chi Rho monogram from the Gospel of Matthew in the Lindisfarne Gospels.

In 793, a Viking raid on Lindisfarne caused much consternation throughout the Christian West. The raid is now often taken as the beginning of the Viking Age.

Alcuin, a Northumbrian scholar in Charlemagne’s court at the time, wrote:

“Never before has such terror appeared in Britain as we have now suffered from a pagan race …
The heathens poured out the blood of saints around the altar,
and trampled on the bodies of saints in the temple of God, like dung in the streets.”

The English had turned their back on the sea as they became more settled. Many monasteries were established on islands, peninsulas, river mouths, and cliffs.

Isolated communities were less susceptible to the politics of the heartland. However, the Vikings took advantage of such vulnerable, wealthy, and unarmed settlements.

The 9th-century invasions came from the Danes of the Baltic. The first Danish raids into England were in the Isle of Sheppey, Kent, during 835.

During this period, religious art continued to flourish on Lindisfarne. But by 866, the Danes were in York, and in 873, the army was moving into Northumberland.

With the collapse of the Northumbrian kingdom, the monks of Lindisfarne fled the island.

The Lindisfarne community settled in the Priory at Chester-le-Street in Durham. This is where Aldred completed the interlinear translation of the text.

After Henry VIII ordered the Dissolution of the Monasteries in 1539, the manuscript was separated from the priory. The Gospels were acquired in the early 17th century by Sir Robert Cotton.

The Holy Island of Lindisfarne is a tidal island off the northeast coast of England, in Northumberland. Lindisfarne has a recorded history from the 6th century AD, and it was an important center of Celtic Christianity.

The term Holy Island was in use by the 11th century when it appears in Latin as Insula Sacra. The reference was to Saints Aidan and Cuthbert.

The monastery of Lindisfarne was founded circa 634 by Irish monk Saint Aidan, who had been sent from Iona off the west coast of Scotland to Northumbria at the request of King Oswald.

The priory was founded before the end of 634 and remained the only seat of a bishopric in Northumbria for nearly thirty years.

Lindisfarne became the base for Christian evangelism in the North of England and also sent a successful mission to Mercia. Monks from the Irish community of Iona settled on the island. 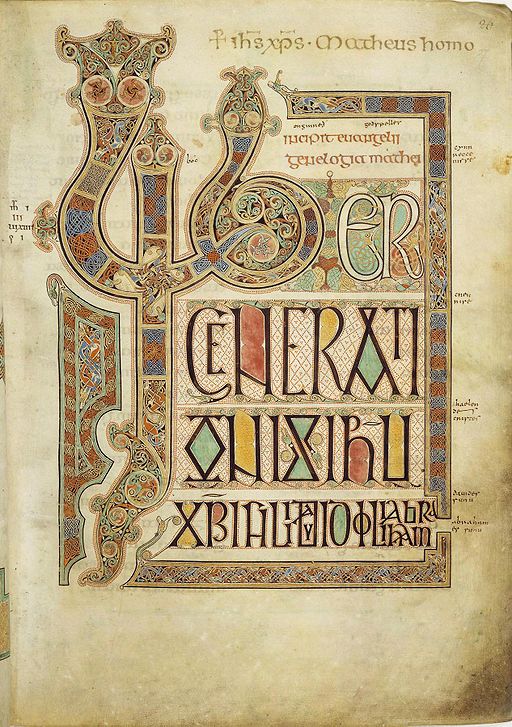 Insular Art, also known as Hiberno-Saxon art, was produced in the post-Roman history of Ireland and Britain. The term derives from the Latin term for “island.”

During this period, Britain and Ireland shared a mostly common style different from that of the rest of Europe.

Most Insular art originates from the Irish monastic movement of Celtic Christianity, beginning around 600 with the combining of Celtic and Anglo-Saxon styles.

This style definition is now applied to decorating new types of objects copied from the Mediterranean world, above all the codex or book

The most exceptional period of the style was brought to an end by the disruption to monastic centers and aristocratic life of the Viking raids, which began in the late 8th century.

The best examples of Insular Art include the Book of Kells, Lindisfarne Gospels, Book of Durrow, brooches such as the Tara Brooch and the Ruthwell Cross.

Carpet pages are a characteristic feature of Insular manuscripts, although historiated initials, an Insular invention, canon tables, and figurative miniatures, especially Evangelist portraits, are also familiar in the Insular style.

The Cotton library is a collection of manuscripts once owned by Sir Robert Bruce Cotton MP (1571–1631), an antiquarian and bibliophile. It later became the basis of what is now the British Library.

After the Dissolution of the Monasteries, many ancient manuscripts that had belonged to the monastic libraries began to be disseminated among various owners.

Cotton was successful in finding, purchasing, and preserving these ancient documents. The library is of special importance for having preserved the only copy of works, such as Beowulf and Sir Gawain and the Green Knight.

“Behold, the church of St. Cuthbert spattered with the blood of the priests of God, despoiled of all its ornaments; a place more venerable than all in Britain is given as a prey to pagan peoples.”
– Alcuin, Letter to Ethelred, King of Northumbria