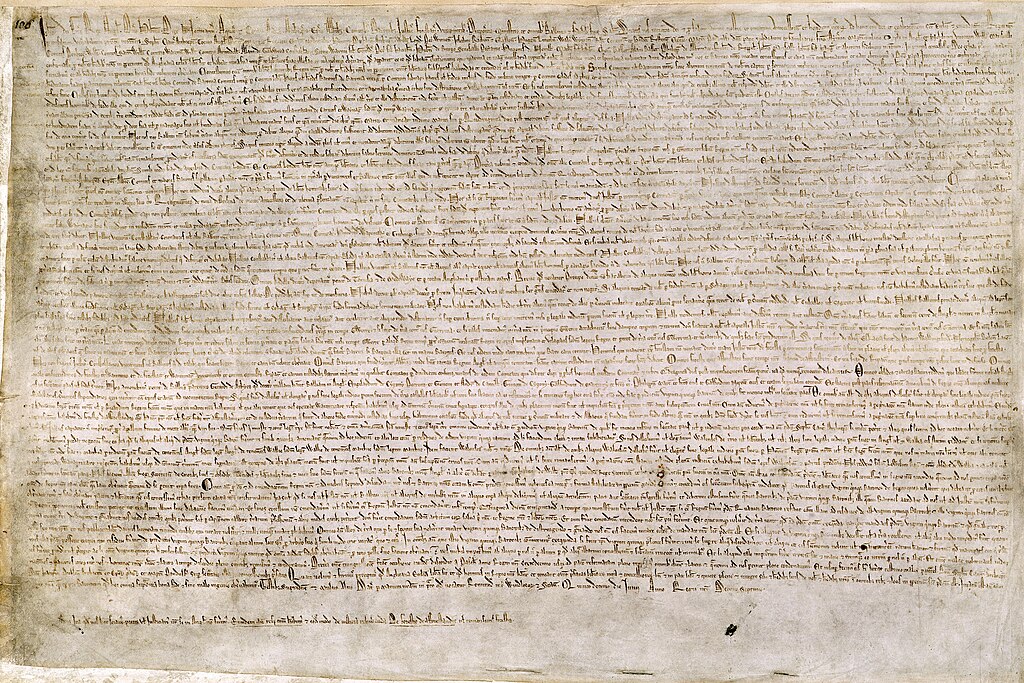 Neither side stood behind their commitments in the Magna Carter, leading to the First Barons’ War.

After John’s death, the regency government of his young son, Henry III, reissued the document in 1216, stripped of some of its more radical content, in a bid to build political support for the new King.

In 1217, the document formed part of the peace treaty, at which time the document acquired the name, Magna Carta, to distinguish it from other Charters, which were issued at the time.

Henry reissued the Charter in 1225 in exchange for a grant of new taxes and funds. His son, short of funds, repeated the process in 1297, this time confirming it as part of England’s statute law.

The original Charter had concerned the relationship between the monarch and the barons, rather than the rights of ordinary people, but the Charter remained a powerful, iconic document.

The Charter became part of English political life and was renewed by each new monarch. As the Parliament of England grew in power and passed new laws, the Charter lost some of its practical significance.

Lawyers, however, continued to argue that the Charter was an essential foundation for the powers of Parliament and legal principles and to argue against the divine right of kings.

The political myth of Magna Carta and its protection of ancient personal liberties influenced the early American colonists and the formation of the United States Constitution.

Magna Carta still forms an important symbol of liberty today, often cited by politicians and campaigners, and is held in high respect by the British, American, and Australian legal communities.

Lord Denning described it as:

“the greatest constitutional document of all times – the foundation of the freedom of the individual against the arbitrary authority of the despot.“

Today four of the original thirteen copies of the 1215 charter remain in existence, two at the British Library, one at Lincoln Castle, and one at Salisbury Cathedral.

Each was sealed with the great royal seal made of beeswax and resin sealing wax, though few of the seals have survived.

There were no signatures on the Charter of 1215, and the barons present did not attach their seals to it.

Numerous copies, known as exemplifications, were made of the various charters, and many of them still survive.

There are several subsequent charters in public and private ownership. Copies of the 1297 charter can be found in both the United States and Australia.

The Charter was written on parchment sheets made from sheepskin using quill pens, in heavily abbreviated medieval Latin, which was the convention for legal documents at that time.

The document formed a single, long, unbroken text, which was not divided into paragraphs or clauses.

John (1166 – 1216) was the King of England who lost most of his French lands to the King of France and who’s heavy-handedness caused the baron’s revolt, which led to the Magna Carta.

After John’s attempt to defeat King Philip of France failed he returned to England, where he faced a rebellion by many of his barons. The barons were unhappy with his taxes and his treatment of powerful nobles.

Although both John and the barons agreed to the Magna Carta peace treaty in 1215, neither side complied with its conditions. Civil war broke out shortly afterward, with the barons aided by the Franch King.

John died while on campaign in 1216, but supporters of his son Henry III went on to achieve victory over the rebel barons the following year.

Contemporary chroniclers and modern historians are mostly critical of John’s performance as King.

What is Magna Carta?

The Magna Carta in Australia

King John and the Magna Carta

The Story of Magna Carta

Magna Carta – the story of our freedom

“Magna Carta – a system of checks and balances which would accord the monarchy its necessary strength, but would prevent its perversion by a tyrant or a fool.”
– Winston Churchill