Original Manuscript of Alice in Wonderland

The original manuscript copy of “Alice’s Adventures Under Ground,” from 1864 is preserved in the British Library.

The manuscript is written in sepia-colored ink, and includes 37 pen and ink illustrations and a colored title page. The original drawings were only uncovered in 1977.

Alice’s Adventures in Wonderland was created by Lewis Carroll, which was the pseudonym of Charles Dodgson. Charles Lutwidge Dodgson (1832 – 1898) is better known by his pen name Lewis Carroll.

The story first developed when Dodgson, together with his friend Reverend Duckworth, rowed in a boat accompanied by three young girls.

The three girls were the daughters of another friend Henry Liddell, and one of the girls was named Alice.

The journey on a river in Oxford was five miles long, and during the trip, Dodgson created for the girls a story that featured a bored little girl named Alice who goes looking for an adventure.

The girls loved it, and Alice begged Dodgson to write it down for her. Dodgson began writing the manuscript of the story the next day, although that earliest version is lost.

The girls and Dodgson took another boat trip a month later when he elaborated on the plot to the story of Alice.

Dodgson then researched the natural history for the animals in the story, and after completing the manuscript, he had the story reviewed by other children.

In 1864, Dodgson gave Alice the handwritten manuscript of “Alice’s Adventures Under Ground,” with his own illustrations.

Alice Liddell held her original treasured the manuscript until 1928 but was then forced to sell it to pay death duties after the death of her husband.

The manuscript was first sold at auction and then actioned again by on multiple occasions by various owners. It was eventually purchased by American benefactors, who donated the manuscript to the British Museum in 1948.

The return of this important manuscript to the British people was a token of gratitude for Britain’s stand against Adolf Hitler during the War.

Alice’s Adventures in Wonderland was published in 1865 under the name Lewis Carroll, which was the pseudonym of Charles Dodgson.

Dodgson had initially created his own illustrations, but later asked John Tenniel to illustrate the book for publication.

It tells of a young girl named Alice who falls through a rabbit hole into a subterranean fantasy world populated by peculiar, anthropomorphic creatures.

It is an example of the literary nonsense genre in which the story plays with logic, giving the story popularity with adults as well as with children.

It is one of the best-known works of English-language fiction. Its structure, characters, and imagery have been influential in popular culture, literature, and in the fantasy genre.

The work has never been out of print, and it has been translated to about 100 languages. It has been adapted for the stage, screen, radio, art, theme parks, board games, and video games.

Carroll published a sequel in 1871, entitled “Through the Looking-Glass,” and a version for young children, The Nursery “Alice,” in 1890. 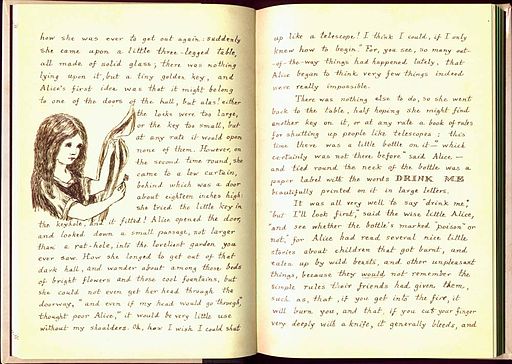 Charles Lutwidge Dodgson (1832 – 1898), is better known by his pen name Lewis Carroll.  He was an English writer of children’s fiction, most famously “Alice’s Adventures in Wonderland” and its sequel “Through the Looking-Glass.”

He was noted for his wordplay, logic, and fantasy. He was also a mathematician, photographer, and Anglican deacon.

Carroll developed a long relationship with Christ Church, Oxford, where he lived for most of his life as a scholar and teacher.

Alice Liddell, daughter of the Dean of Christ Church, Henry Liddell, is identified as the original inspiration for Alice in Wonderland.

Dodgson met and became friends with John Ruskin in 1857, and around 1863, he developed a close relationship with Dante Gabriel Rossetti and his family. He also knew William Holman Hunt and  John Everett Millais, among other artists.

He knew fairy-tale author George MacDonald, and it was the enthusiastic reception of his draft of Alice by MacDonald’s children that persuaded him to submit the work for publication.

Within his academic discipline of mathematics, Dodgson worked in the fields of geometry, algebra, mathematical logic, and recreational mathematics, producing nearly a dozen books under his real name.

Dodgson also developed new ideas in linear algebra, probability, and the study of elections. His employment as a Mathematical Lecturer at Christ Church gave him financial security.

In 1982, a memorial stone to Carroll was unveiled in Poets’ Corner, Westminster Abbey.

Dodgson was unsatisfied with some of his illustrations and place a photograph of Alice over a drawing of her instead.

The Secret World Of Lewis Carroll – Alice In Wonderland Documentary

“It’s no use going back to yesterday because I was a different person then.”

“And what is the use of a book, without pictures or conversations?”

“Well, I never heard it before, but it sounds uncommon nonsense.”

“If everybody minded their own business, the world would go around a great deal faster than it does.”

“Begin at the beginning and go on till you come to the end: then stop.”

“It is better to be feared than loved.”

“Why, sometimes I’ve believed as many as six impossible things before breakfast.”

“No wise fish would go anywhere without a porpoise.”

“You’re thinking about something, and it makes you forget to talk.”

“It’s no use going back to yesterday because I was a different person then.”
― Alice in Wonderland by Lewis Carroll