This “Perforated Baton” with low relief horse, was created during the last Ice Age (Upper Palaeolithic). This antler baton was used in the manufacture and throwing of spears.

The hole is a gauge to shape the shaft of the spear and rub the wood smooth. It was also used to straighten both the tips and the shafts. The baton is 16.6 cm long, 5.5 cm wide, and 3 cm thick.

By looping a strip of rawhide through the hole, the tool also becomes a weapon. Looping the thong around the end of the spear turns the baton into a spear thrower.

This object represents both a decorated tool and a weapon. It is an essential tool and piece of art that serves more than one function and is easily transportable when one is on the move.

The baton has one perforated hole in the near center, with a deep groove above it, which runs long ways just below the upper edge.

To the left of the hole is an image of a horse that appears in low-relief. The figure has a large eye, a high angular shaped mane, and small forelegs that seem to sweep backward. There are two incised V shapes on its flank that might suggest injury or movement. 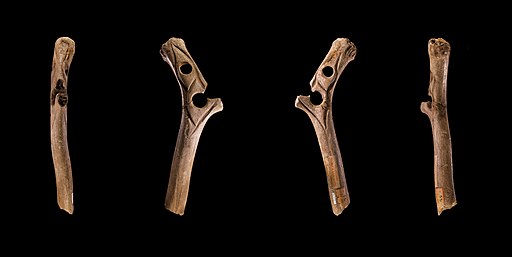 Four views of another Baton from Abri de la Madeleine

The Magdalene Shelter is the type-site for the Magdalenian culture. The occurrence of a large eye is a feature found on other baton examples excavated at La Madeleine.

The Perforated Baton was discovered at the archaeological site Abri de la Madeleine represents the type site of the Magdalenian culture of the Upper Paleolithic.

The shelter was also occupied during the Middle Ages. The medieval castle of Petit Marsac stands on the top of the cliff just above the shelter.

The first systematic excavators of the site occurred in the 1860s, and the findings published in 1875 under the name of the “Age of the Reindeer.”

The significant objects that were found at the la Madeleine site are distributed among several museums, including the British Museum.

The Perforated Baton was part of the Magdalenian cultures, which are cultures of the Upper Paleolithic and Mesolithic in western Europe. They date from around 17,000 to 12,000 years ago.

It is named after the type site of La Madeleine, a rock shelter located in the Vézère valley, the commune of Tursac, in France.

The Magdalenian epoch is associated with reindeer hunters. However, Magdalenian sites contain extensive evidence for the hunting of red deer, horses, and other large mammals present in Europe toward the end of the last ice age.

The culture was geographically widespread, and later Magdalenian sites stretched from Portugal in the west to Poland in the east.

The Upper Paleolithic or Late Stone Age dates to between 50,000 and 10,000 years ago, marked by the appearance of behavioral modernity in early modern humans.

This period includes the process of expansion of modern humans from Africa throughout Asia and Eurasia, which contributed to the extinction of the Neanderthals.

The Upper Paleolithic has the earliest known evidence of organized settlements in the form of campsites, some with storage pits.

Perforated Batons are made from a length of antler with a round hole made in one end, and often have abstract, or animal designs etched into them. They have been found at sites of the Upper Paleolithic in Europe, with examples dating from 23–12,000 years ago.

There is a circular hole drilled through the antler just below the joint, and often a smaller second hole on the shaft.

Its purpose was initially thought to be as a symbol of power or status, hence the first name “bâton de commandement,” or “rod of command.”

Today’s interpretations for the uses of the Perforated Baton include: