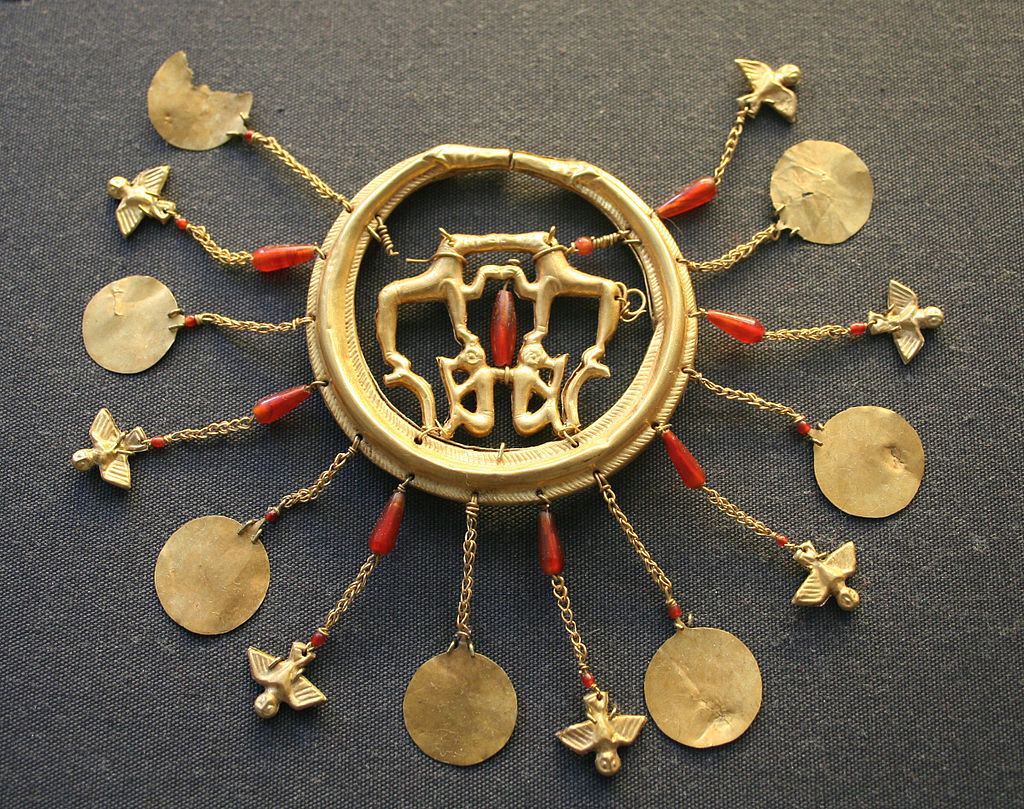 The Aegina Treasure is composed of gold jewelry that has been dated to the Greek bronze age between 1850 and 1550 BC. It includes two pairs of earrings, three diadems, a pendant, a bracelet, a gold cup, four rings, plaques, and gold stripes. There are also five interconnecting golden rings plus beads and necklaces made of a variety of materials including gold, lapis lazuli, amethyst, quartz, cornelian, and green jasper. The most elaborate items are a pendant and a pair of earrings.

The pair of earrings is designed with the main body in a hoop with a double-headed snake. Inside are two animals, possibly greyhounds, over two monkeys. Around the circle are fourteen short chains, alternating ending in golden discs and figures of owls.

The pendant seems to represent a Cretan deity in a field of lotus flowers flanked by two geese in a field. The background is composed of two unidentified objects that are considered to be either connected to “cult horns,” the sacred horns of bulls, or potentially composite bows.

Aegina, the island where this treasure hoard was found, is one of the Saronic Islands of Greece about 17 miles from Athens. During ancient times Aegina was a rival of Athens, the great sea power of the era.

During the Minoan period trade, between Crete and Aegean and Mediterranean settlements was wide-spread, and through their traders and artists, the Minoan cultural influence became dominant. The reason for the end of the Minoan period is unclear. Theories include Mycenaean invasions from mainland Greece or the volcanic eruption of Thera.

A hoard is an archaeological term for a collection of valuable objects or artifacts, purposely buried in the ground, usually with the intention of later recovery. However, hoarders sometimes died or were unable to return to retrieve the hoard. These surviving hoards might then be discovered many years later. Hoards or caches are considered an indicator of the relative degree of unrest in ancient societies.

A Tour of Treasure Hoard Discoveries

“Love should never be sacrificed for the sake of some dogma difference.”
– St. Nektarios of Aegina