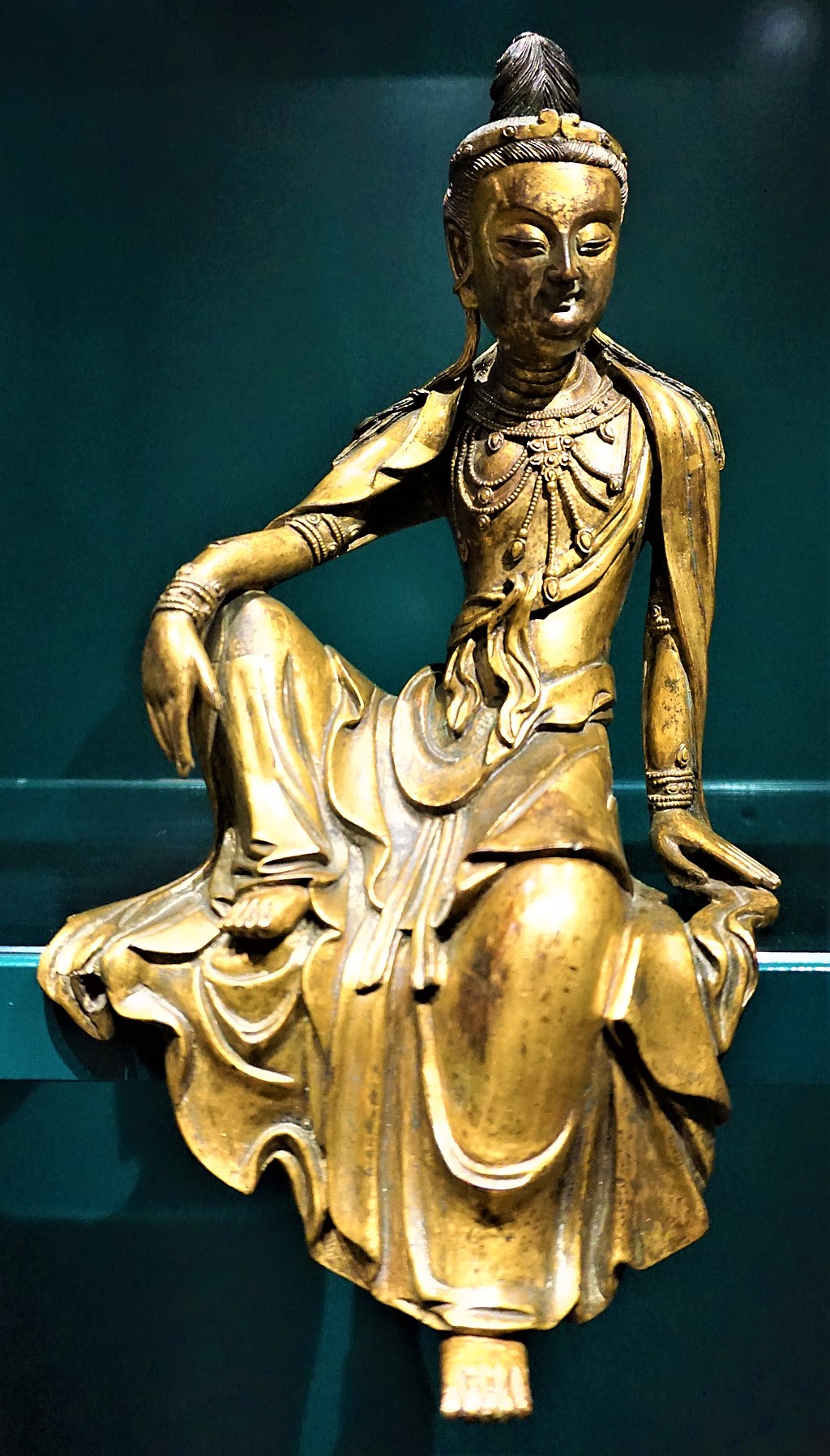 This gilt bronze figure of Avalokiteśvara is seated in a variation of the position of “royal ease” with the right hand resting on a bent right knee and the left-hand bearing the left shoulder.

Described as a “water moon Guanyin” the figure represents a favorite sculptural formula between the 10th and 14th centuries. An Avalokiteśvara is a bodhisattva who embodies the compassion of all Buddhas.

Seated in a position of the. The image is dressed as an Indian prince with long and fluid garments; and with sashes, scarves and jewels.

In Buddhist art, these figures have consistent iconography. Guanyin can easily be identified as a Bodhisattva by the jewelry and the golden hue in bronze and the seated position, often in the royal pose, with one foot hanging off the resting base.

Bodhisattvas are a favorite subject in Buddhist art and are variably depicted, described, and portrayed in different cultures as either female or male. In Chinese Buddhism, Avalokiteśvara has become a somewhat different female figure Guanyin.

Guanyin is an East Asian bodhisattva commonly known as the “Goddess of Mercy” in English. The Chinese name Guanyin is short for Guanshiyin, meaning “[The One Who] Perceives the Sounds of the World.”

Guanyin or Guan Yin is the most commonly used Chinese translation of the bodhisattva known as Avalokiteśvara. Guanyin is popular among Chinese Buddhists, and she is generally seen as a source of unconditional love and as a savior.

In her bodhisattva vow, Guanyin promises to answer the cries and pleas of all sentient beings and to liberate them from their karmic woes.

Based on the Lotus Sutra and the Shurangama sutra, Avalokitesvara is generally seen as a savior, both spiritually and physically.

Guanyin is an extremely popular goddess in Chinese folk religion and is worshipped in many Chinese communities throughout East and Southeast Asia. In Taoism, records claim Guanyin was a Chinese woman who became an immortal.

Due to Guanyin’s symbolization of compassion, in East Asia, she is associated with vegetarianism. Buddhist cuisine is generally decorated with her image, and she appears in most Buddhist vegetarian pamphlets and magazines.