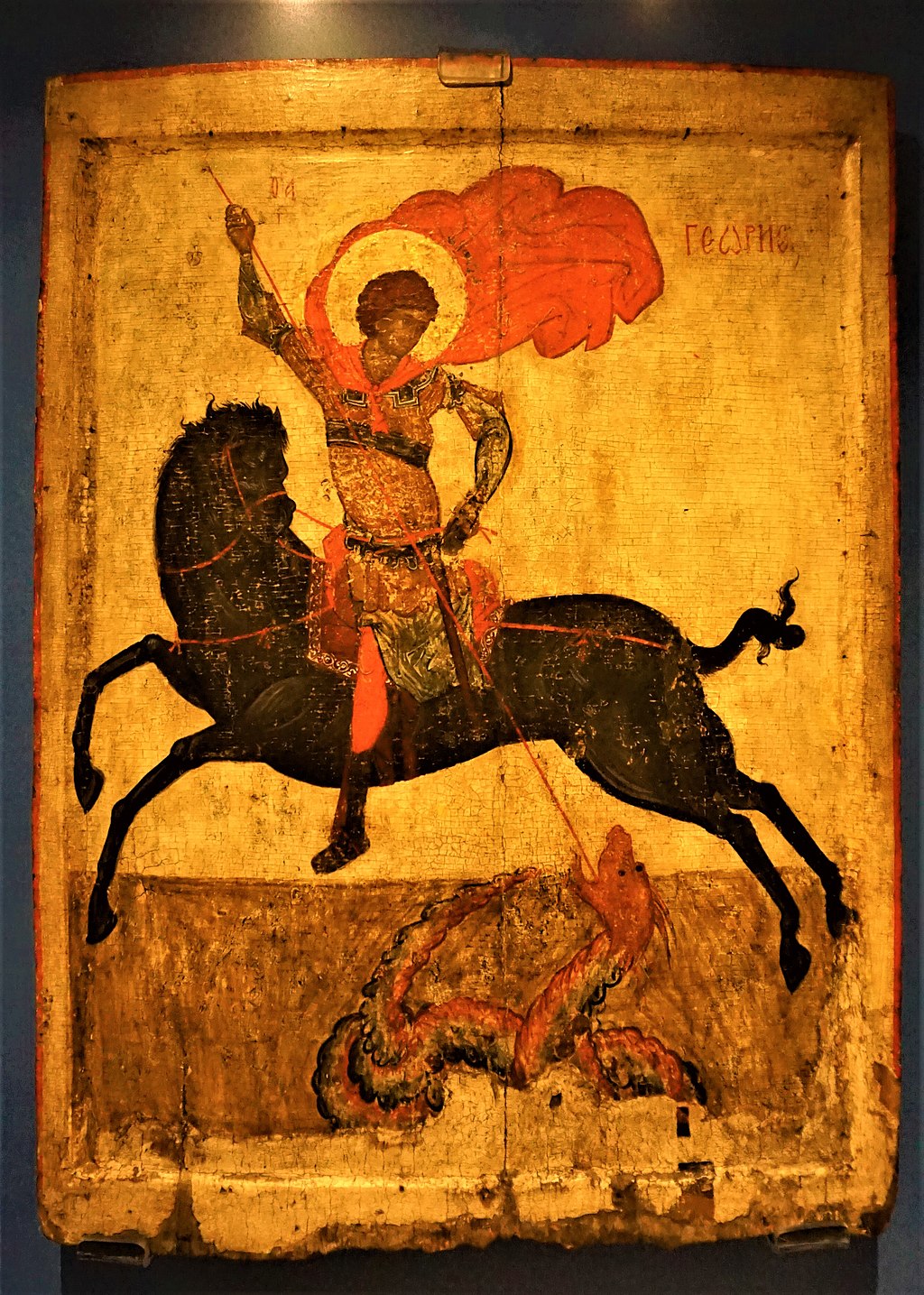 This icon of Saint George has become known as ‘The Black George’ because the horse is painted black rather than the white horse that has traditionally been used for St George Icons. Russia converted to Christianity in 988, and much of its religious art was inspired by the Byzantine traditions. This icon made in 1400 was discovered in 1959 in a village in northern Russia. It was being used as a window-shutter.

The Black St George icon depicts Saint George and the Dragon which legends describe the saint slaying a dragon that demanded human sacrifices and thereby rescuing the princess chosen as the next offering. Some icons depicting the saint as a horseman killing the dragon date to the 12th century. The motif became popular, especially in Greek, Georgian and Russian icon traditions. The saint is depicted in the style of a Roman cavalryman. He is mostly shown on a white horse, facing right, but sometimes also on a black horse, or facing left. From its Eastern origins, it was introduced into the Western Christian tradition by the Crusades.

Byzantine art is the term used for the artistic products produced by or influenced by the Eastern Roman or Byzantine Empire. The empire emerged from Rome’s decline and lasted until the Fall of Constantinople in 1453. Many Eastern Orthodox states in Eastern Europe preserved the empire’s art for centuries afterward. Artistic traditions that originated in the Byzantine Empire, notably regarding icon painting were maintained in Greece, Cyprus, Serbia, Bulgaria, Romania, Russia, and other Eastern Orthodox countries to the present day.

The word “icon” comes from the Greek word meaning “image” and refers to a religious work of art, most commonly a painting, from the Eastern Orthodox Church, Oriental Orthodoxy, and particular Eastern Catholic churches. The most common subjects include Christ, Mary, saints, or angels. Though primarily associated with the “portrait” style, images concentrating on one or two central figures, the term also covers religious images that including narrative scenes.

The use and making of icons entered Kievan Rus’ following its conversion to Orthodox Christianity in  988 AD. The early Russian icons followed the models and formulas carted by the Byzantine world, led from the capital in Constantinople. Later the Russians widened the range of types and styles beyond the original Orthodox traditions.