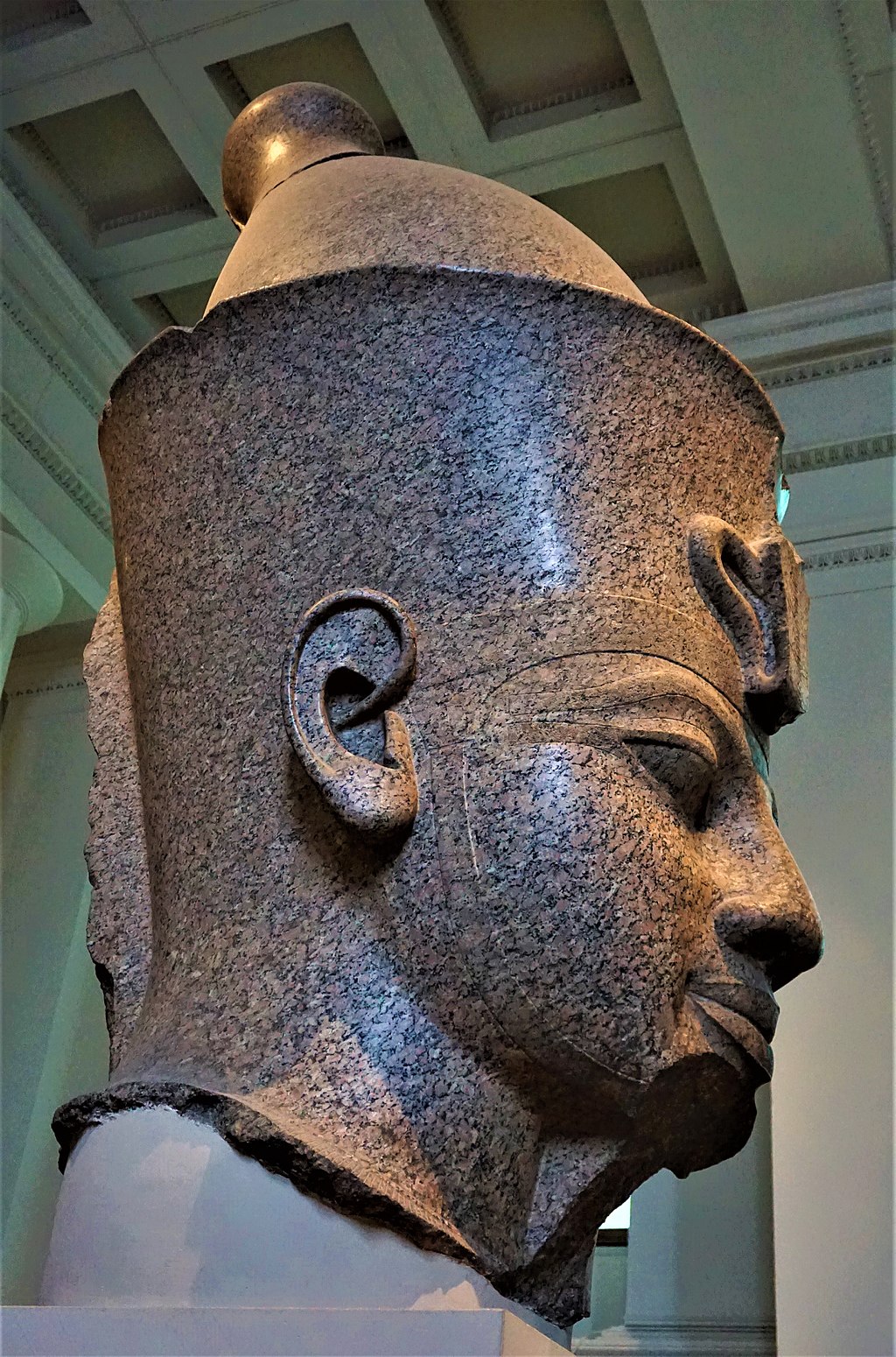 This massive large fragment was created in 1370 BC,  was found in the temple enclosure of Mut at Karnak in Egypt. The statue is made of red granite, and only the head and an arm are known to survive.

Erected by King Amenhotep III, it is one of the many statues that he had ordered to be built in ancient Thebes (Luxor). The left arm is 3.30m long and terminates in a clenched fist, and the head is 2.90m high.

The king’s statue would have stood with both arms straight down, holding containers for papyrus documents in his hand.

After its discovery, the statue in 1817 it was ascribed initially as a statue to another Pharaoh by mistake. The confusion arose from the modification of the head by later Pharaohs, a practice that was common in Ancient Egypt.

Pharaohs would usurp statues of earlier rulers, modifying and re-inscribing them. The lips have had their corners reduced to suggest a smaller mouth, and the broad cosmetic lines around the eyes or the original image have been largely erased.

The alterations were made to represent Ramesses II.

Amenhotep III  ruled Egypt from1386 BC to 1349 BC, during a period of unprecedented prosperity and artistic splendor. Egypt reached the peak of its artistic and international power under his rule.

When he died his son initially ruled as Amenhotep IV, but then changed his royal name to Akhenaten and went on to abandon traditional Egyptian polytheism and introducing worship centered on the Aten.

Amenhotep III has the most surviving statues of any Egyptian pharaoh, with over 250 of his sculptures having been discovered and identified.

Also, during his reign, hundreds of commemorative scarabs were issued to commemorate the deeds of the pharaoh. Such scarabs were found in the archaeological sites of the Near East, from Syria to Sudan.

Over two hundred of them are known to exist around the world. The scarab beetle was a symbol of the sun god and referred to the king and link him to the sun god. Amenhotep III also built extensively at the temple of Karnak, including the Luxor temple.

Amenhotep III was buried in the Western Valley of the Kings, in a Tomb discovered in 1898. An examination of his mummy concluded that the pharaoh was between 40 and 50 years old at death.

“Honour is the inner garment of the Soul;
the first thing put on by it with the flesh,
and the last it layeth down at its separation from it.”
– Egyptian Pharaoh Akhenaten