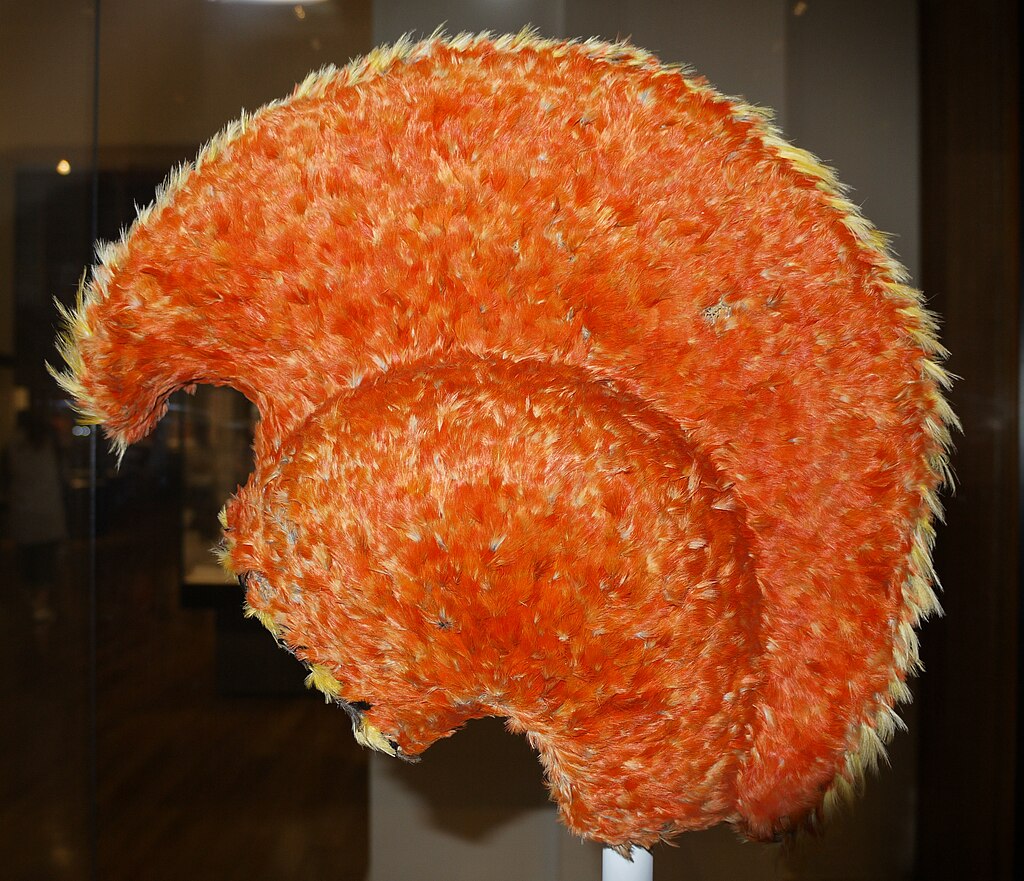 This Hawaiian feather helmet, known as ‘mahiole’ in the Hawaiian language, was worn together with a feather cloak by the chiefly class of Hawaii. These helmets are made from a woven basketry frame structure decorated with bird feathers and featured a central crest running from the center of the forehead to the nape of the neck. There were significant variations in the design of the Hawaiian helmets. There were differences in color and feather patterns, as well as the crest height and thickness. The feathered garments were reserved exclusively for use by royalty, symbolizing their divinity, rank, and power.

As this type of helmet was associated with chiefs of the island of Hawaii, it was most likely collected during Cook’s third voyage (1776-1780). This voyage included visits to the islands of Kauai, Maui, and Hawaii. Sixteen of these helmets were collected during the travels of Captain Cook. When Cook visited Hawaii in 1778, he was received by a high chief. At the end of the meeting, the high chief placed the feathered helmet and cloak he had been wearing on Cook. The Hawaiians also laid several other cloaks at Cook’s feet as well as other offerings of food.

Captain Cook and his crew were the first Europeans ever to visit Hawaii. Cook’s arrival was seen as auspicious because it coincided with an annual festival, and he was welcomed with high honor. Unfortunately, over the following week’s cultural misunderstandings developed. In an attempted forced negotiation, Captain Cook was killed by the Hawaiians, as Cook was trying to help launch a boat from the shore to return to his ship with the high chief. The Hawaiians then took Cook’s body as Cook’s crew retreated to their vessels.

Captain James Cook (1728 – 1779) was an explorer, navigator, cartographer, and captain in the Royal Navy. Cook made three voyages to the Pacific Ocean. He achieved the first recorded European contact with the eastern coastline of Australia and the Hawaiian Islands, and the first European circumnavigation of New Zealand. He left a legacy of new knowledge, which was to influence all his successors, and there are many memorials worldwide dedicated to his achievements.

Cook joined the British merchant navy as a teenager and then the Royal Navy, where he saw action in the Seven Years’ War. Subsequently, he surveyed and mapped much of the entrance to the Saint Lawrence River, Canada. He was commissioned in 1766 as commander of HM Bark Endeavour for the first of three Pacific voyages. In three voyages, Cook sailed thousands of miles across mostly uncharted areas of the globe. Cook mapped lands from New Zealand to Hawaii in the Pacific Ocean in greater detail and on a scale not previously achieved. He displayed physical courage and an ability to lead men in adverse conditions.

“The Death of Captain James Cook, 14 February 1779” by Johan Zoffany

Cook had entered the Kealakekua Bay on the Kona Coast of the island of Hawaiʻi during “Makahiki,” a traditionally peaceful time. Cook and his men were welcomed and treated as honored guests. They stayed for several weeks, returning to the sea shortly after the end of the festival. After suffering damage to the mast during a storm, the ships returned two weeks later to the bay.

During this return visit, one of Cook’s captains accused a native chieftain of stealing a jolly-boat. With a damaged mast, fraying relations, and being heavily outnumbered, Cook attempted to lure Hawaiian chief aboard his ship to hold him as a hostage. Tensions mounted as Cook tried to trick the chief, and natives surrounded the beach. In the escalating skirmish, Cook’s men shot some natives, and Cook attempted to lead a retreat. During the retreat, Cook was stabbed through the chest with an iron dagger. The dagger had been previously traded with Cook’s ship.

Cook’s men could not leave without resupplying fresh water and further repairs. They remained for another week to continue repairs and to collect drinking water. During that time, hundreds of Hawaiians were shot in a series of ongoing battles. The ship’s cannon was used on several occasions, and a large portion of one of the towns in the bay was burned.

Cook’s body was never recovered, and Cook’s death was depicted in a series of paintings called “Death of Cook.”

Hawaiian feather helmets, known as mahiole, were worn with feather cloaks. These were symbols of the highest rank reserved for the men of the chiefly class of Hawaii. At least sixteen of these helmets were collected during Captain Cook’s voyages. These helmets are made from a woven frame structure decorated with bird feathers and are examples of excellent featherwork techniques. Although birds were exploited for their feathers, they were not killed, a few feathers harvested, and then the birds were released.

Photo Credit: 1)By Geni (Photo by user:geni) [GFDL (http://www.gnu.org/copyleft/fdl.html) or CC BY-SA 4.0 (https://creativecommons.org/licenses/by-sa/4.0)], via Wikimedia Commons; 2) Johann Zoffany [Public domain];  Content: Content from Wikipedia articles on the above subjects is licensed under CC-BY-SA