This Moai is distinguished by carvings added at a later date to the back, associated with the island birdman cult. The figure was identified as Hoa Hakananai’a by islanders at the time it was removed from the island in 1868.

Hoa Hakananai’a is made from a block of dark grey-brown flow lava, commonly described as basalt.

Typical of many of the Easter Island moai, Hoa Hakananai’a features:

The back of the statue is covered with relief carvings. Either side and above the ring are two facing birdmen, stylized human figures with beaked heads said to represent frigate birds.

Above these, in the center of the statue’s head, is a smaller bird, and on either side are ceremonial dance paddles, a symbol of male power and prestige.

The birdmen are interpreted as a fertility god and chief god of the birdman cult. The cult involved an annual competition to retrieve the first egg laid by migrating sooty terns. The last ceremony is thought to have been held in 1866 or 1867. 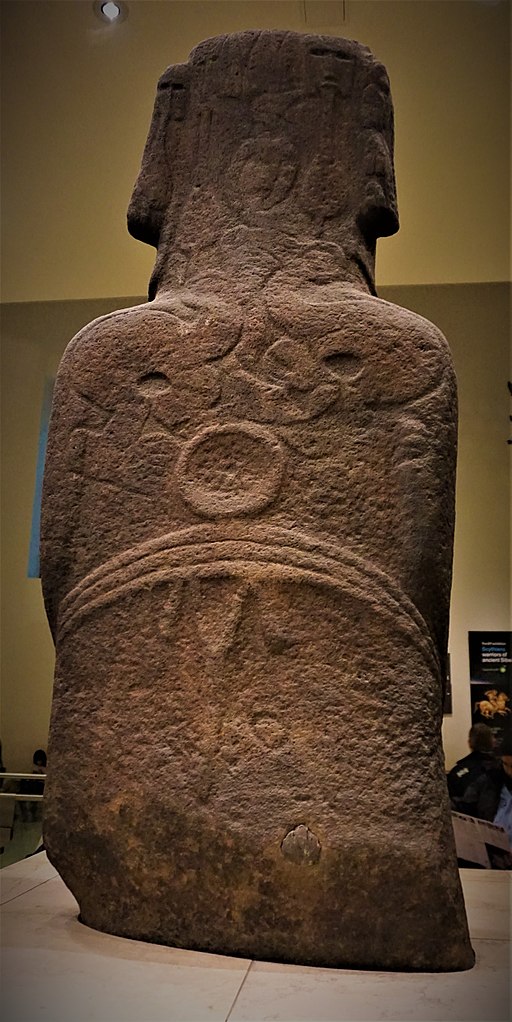 The back of the statue is covered with relief carvings.

The Rapa Nui are believed to have settled on Easter Island between 300 and 1200 CE and are of Polynesian origin.

The best-known aspect of the Rapa Nui culture is the Moai, the 887 human figures carved between 1250 and 1500 CE and transported throughout the island.

The moai were believed to be the living faces of ancestors, although they had all been toppled by 1868.

In 1979, a team of archaeologists discovered that the deep elliptical eye sockets were designed to hold coral eyes with either black obsidian or red scoria pupils.

The discovery was made by collecting and reassembling broken fragments of white coral that were found at the various sites.

Hoa Hakananai’a, by The British Museum on Sketchfab

“Easter Island isolated in the Pacific Ocean
— once the island got into trouble,
there was no way they could get free.”
-Jared Diamond