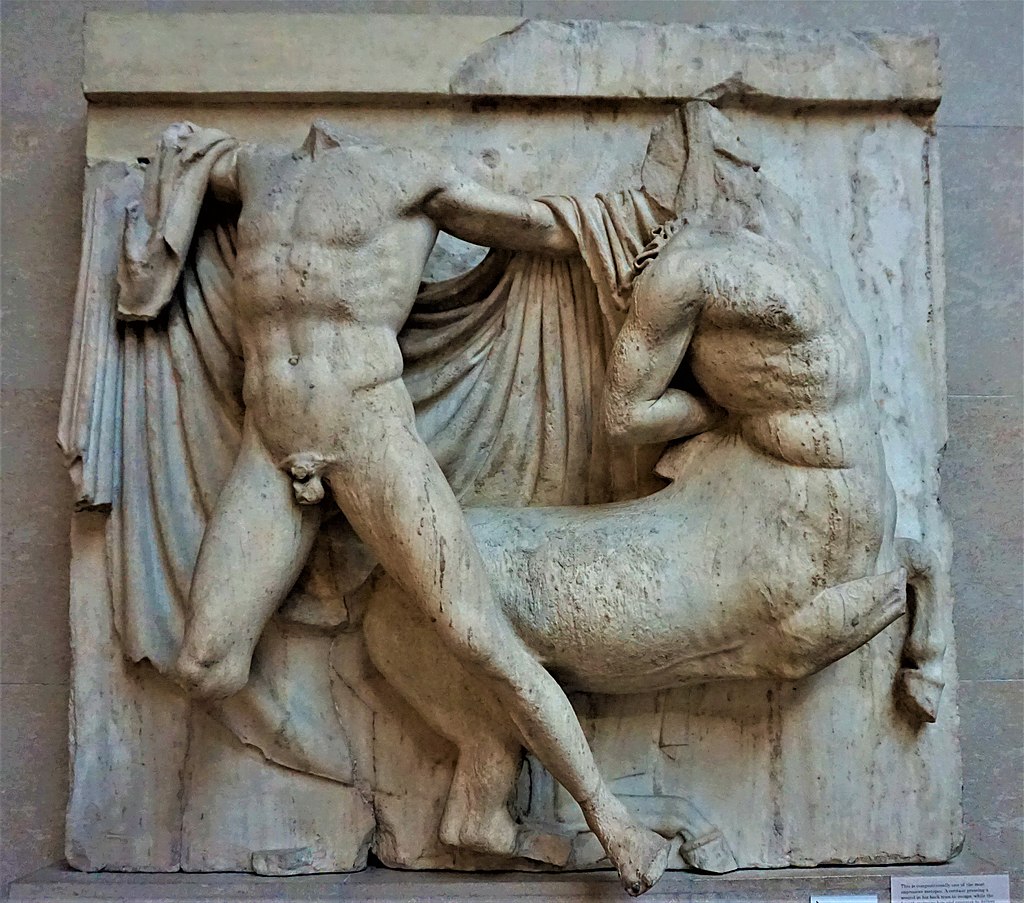 The Metopes of the Parthenon

The “Metopes of the Parthenon” are the surviving set of what initially had been 92 square carved plaques of marble. They were originally located above the columns of the Parthenon on the Acropolis of Athens.

Typically each metope depicts two characters in combat. The Metopes were part of the relief sculptures that were integral to the architecture of the Parthenon. They are square marble blocks that were positioned high on the exterior of the temple walls.

There is a different battle theme depicted on each side of the building. On the west wall metopes is the portrayal of the mythical battle between the Ancient Greeks and the Amazons, a nation of all-female warriors in the west.

On the north wall, metopes portray the Fall of Troy. On the east wall, the metopes depict the battle between the Giants with the Olympian gods.

Finally, on the south wall, the metopes depict the fight of Centaurs and Lapiths. A centaur is a mythological creature with the upper body of a human and the lower body and legs of a horse.

The war theme of the metopes demonstrates the battle between order and chaos. Or the fight between civilization and barbarism and the triumph of the city of Athens in this battle.

The Metopes illustrate scenes from Athenian mythology and history. For Athenians, they also symbolized the victory of Athenian reason and order over chaos.

The west facade of the Parthenon, with the metopes under the pediment

Many of the Metopes were damaged by Christians when the Parthenon was transformed into a Christian church. This Christian damage happened towards the sixth or the seventh century AD.

Later during the period of the Ottoman invasion, the Ottomans placed a gunpowder magazine in the Parthenon.

The Venetians, during the siege of Athens in 1687, targeted the gunpowder magazine in the Parthenon with cannons and, with a direct hit, exploded the massive powder dump and destroyed the roof of the Parthenon.

This explosion caused the most dramatic destruction in the 2,000-year-old Parthenon’s structure in its most recent history.

In Greek mythology, the Amazons were a tribe of warrior women believed to live in Asia Minor. They were brutal and aggressive, and their main concern in life was war. T

he battle between Theseus and the Amazons is a favorite subject on the friezes of temples.

In works of art, battles between Amazons and Greeks are on the same level as battles of Greeks and Centaurs. Having been introduced into the national poetry and art, it became necessary to surround them with the appearance of natural beings.

The model for Amazons in the Greek mind had been the goddess Athena. In later art, they approach the model of Artemis, wearing a thin dress, girt high for speed.

They were usually on horseback, in the Greek mind, the Amazons were linked to the Scythians.

In Greek mythology, the Trojan War was waged against the city of Troy by the Greeks after Paris of Troy took Helen from her husband, the King of Sparta. The war is one of the most important events in Greek mythology.

After the death of many Greek heroes, including Achilles and Ajax, Troy fell to the ruse of the Trojan Horse.

The Greeks slaughtered the Trojan men and desecrated the temples, thus earning the gods’ wrath. Few of the Greeks returned safely to their homes, and many founded colonies in distant shores.

In Greek Mythology, the Giants were a race of great strength and aggression. The Gigantomachy is the name of their battle with the Olympian gods.

The most important divine struggle in Greek mythology was the battle fought between the Giants and the Olympian gods for supremacy of the cosmos.

It is primarily for this battle that the Giants are known, and its frequent depiction in Greek art attests its importance to Greek culture.

The vanquished Giants were said to be buried under volcanoes and to be the cause of volcanic eruptions and earthquakes.

In the Centauromachy, the Lapiths battle with the Centaurs at a wedding feast. The Centaurs had been invited, but, unused to wine, their wild nature came to the fore.

When the bride was presented to greet the guests, the centaur Eurytion leaped up and attempted to abduct her. In the battle that ensued, Theseus came to the Lapiths’ aid, and the defeated Centaurs were expelled from Thessaly.

Battles between Lapiths and Centaurs were depicted in the sculptured metopes on the Parthenon.

As Greek myth mediated through philosophy, the conflict between Lapiths and Centaurs took on aspects of the interior struggle between civilized and wild behavior, made concrete in the Lapiths’ understanding of the correct usage of god-given wine, which must be tempered with water and drunk not to excess.

The Lapiths and Centaurs story was seen as symbolic of the great conflict between the civilized Greeks and “Barbarians.”

Metopes of the Parthenon

A Parthenon metope: history and reconstruction

Metopes of the Parthenon

Metopes – The Acropolis and The Parthenon

“Greece lies outspread fair and sunshiny in floods of light, for there is the sun and daylight in her literature and art. Homer does not allow us to forget that the sun shone,–nor Phidias, nor the Parthenon.”
– Henry David Thoreau