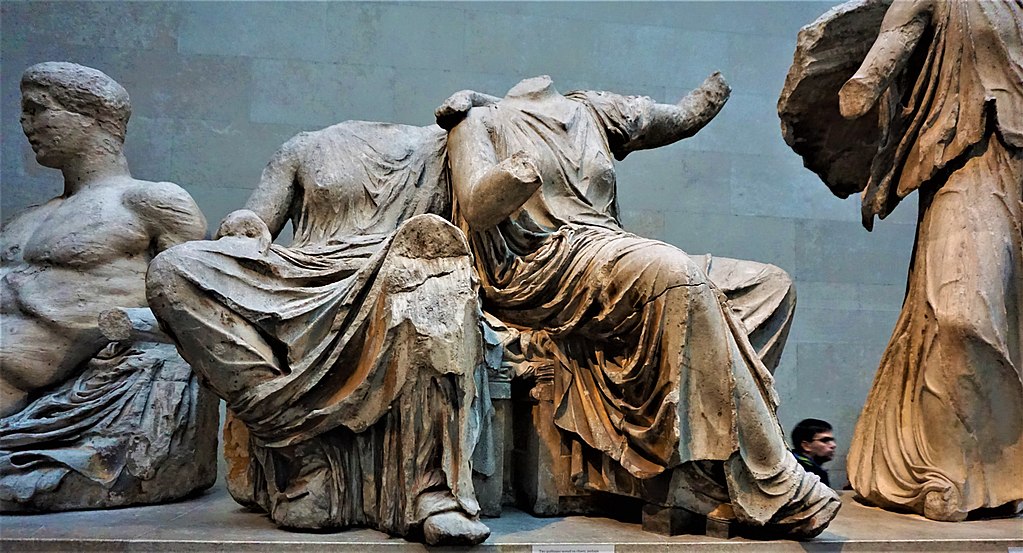 Pedimental Sculptures of the Parthenon

The Parthenon’s Pediments are the two sets of fifty statues in marble initially located on the east and west facades of the Parthenon on the Acropolis of Athens.

The East Pediment, which was above the temple entrance, told the story of the birth of Athena. The sculptural arrangement depicts the moment of Athena’s birth.

The West Pediment illustrated the contest between Athena and Poseidon during their competition for the honor of becoming Athens’ patron.

The pediment is an architectural element of Classical Greek Architecture consisting of the triangular section in front and behind the temple located above the horizontal sections supported by columns.

The pediment was not an ideal space for sculptures and demanded imagination and skill to create sculptures that worked in the narrowing areas at either end of the sloping Pediment.

The blast caused some of the statues to fall. Later the Venetians decided to take some sculptures from the western pediment.

However, they were ill-equipped, and the figures crashed to the ground with further damage inflicted. Only one female head found its way to Venice, and part of the head of one of the horses of Athena’s chariot is in the Vatican.

Considered the perfect example of Classical Greek sculpture and the embodiment of ideal beauty, many of the statues were removed from the building in 1801 by Lord Elgin’s agents and transported to the British Museum in London.

Demeter and her daughter Persephone

Two of the female figures from the Pedimental Sculptures of the Parthenon represent Demeter and her daughter Persephone.

In the ancient Greek religion and mythology, Demeter, who was Zeus’ sister, is the goddess of the harvest and agriculture; she presided over grains and the earth’s fertility.

She and her daughter Persephone were the central figures of earlier mythology that predated the Olympian pantheon of Gods.

The myth about these two figures is centered on the story in which Hades, the God of the underworld, abducted Demeter’s virgin daughter Persephone.

Demeter was distraught at the loss of her daughter and searched everywhere for her. As Demeter became inconsolably preoccupied with her loss and grief, the seasons failed, living things stopped growing and began to die.

Faced with extinction on earth, Zeus, the king of all the gods, sent his messenger, Hermes, to the underworld to bring Persephone back to Demeter. Hades agreed to release her if she had not eaten anything while in Hades.

Unfortunately, Persephone had eaten pomegranate seeds. This indiscretion condemned Persephone to Hades and the underworld for certain months every year.

Thus every Spring, Demeter, with her daughter’s return, would make sure the flowers bloomed, and crops grew, and the fields were green.

Every Winter, when Persephone returned to the underworld, Demeter would ignore the plants and the flowers and let them die.

And then again in the Spring, Demeter would bring everything back to life again, ready to welcome her daughter. These Parthenon sculptures capture the Golden Age of Athens’ culture and spirit, a culture that celebrated perfection, beauty, the heroic, and the noble.

Pedimental Sculptures of the Parthenon

A Tour of Greek Genius

Parthenon sculptures at the British Museum

Egyptian Blue on the Parthenon Sculptures

“A miser and a liar bargain quickly.”
– Greek Proverb