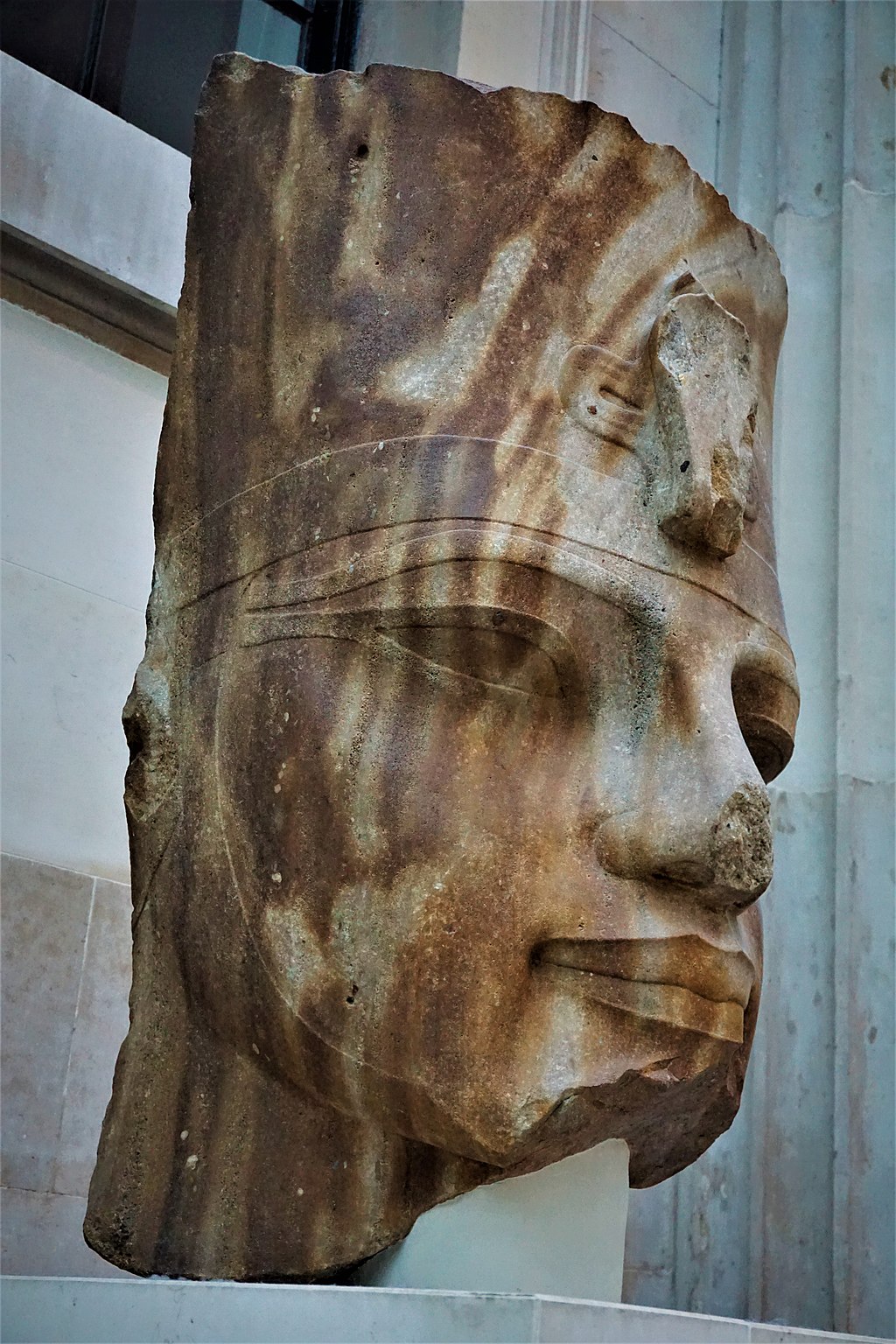 This Quartzite head of Amenhotep III has been carved with expert care. The eyeballs noticeably angled back from the top to the bottom lid so that they appear to look down at the viewer.

The finishing polish was deliberately varied, from a glittering smoothness on the facial surfaces to less finish on the mouth and eyes, to quite rough surfaces on the brows.

Amenhotep is shown with youthful-looking cheeks, broad, long, and somewhat narrow eyes and the lower lip, which curves up to the open corners of the mouth to produce the effect of a slight smile.

Amenhotep III was the ninth Pharaoh of the Eighteenth Dynasty, ruling Egypt from about 1386 to 1349 BC. His reign was a period of prosperity and artistic splendor when Egypt reached the peak of its creative and international power.

The Egyptian Sed Festival, which dates from the dawn of early Egyptian kings of the Old Kingdom, requires a king who has served 30 years of his reign, to perform a series of tests to prove his fitness for continuing as Pharaoh.

On completion, the king can serve three more years before holding another Sed Festival. When he died in the 38th or 39th year of his reign, his son initially ruled as Amenhotep IV, but then changed his royal name to Akhenaten.

Amenhotep III has the most surviving statues of any Egyptian pharaoh, with over 250 figures having been discovered and identified. Since these statues span his entire life, they provide a series of portraits covering the length of his reign.

Amenhotep III was buried in the Western Valley of the Kings. Sometime during the Third Intermediate Period, his mummy was moved from this tomb and was placed in a side-chamber of along with several other pharaohs. It lay in peace until discovered in 1898.

An examination of his mummy concluded that the Pharaoh was between 40 and 50 years old at death. Foreign leaders communicated their grief at the Pharaoh’s end, with sayings such as:

When Amenhotep III died, he left behind a country that was at the very height of its power and influence. Egypt was also firmly wedded to its traditional political and religious certainties under the Amun priesthood, which ultimately undermined his son, Successor, Akhenaten.

The discovery of the temple of Amenhotep III

“Every man must act in the rhythm of his time… such is wisdom.”
– Egyptian Proverb