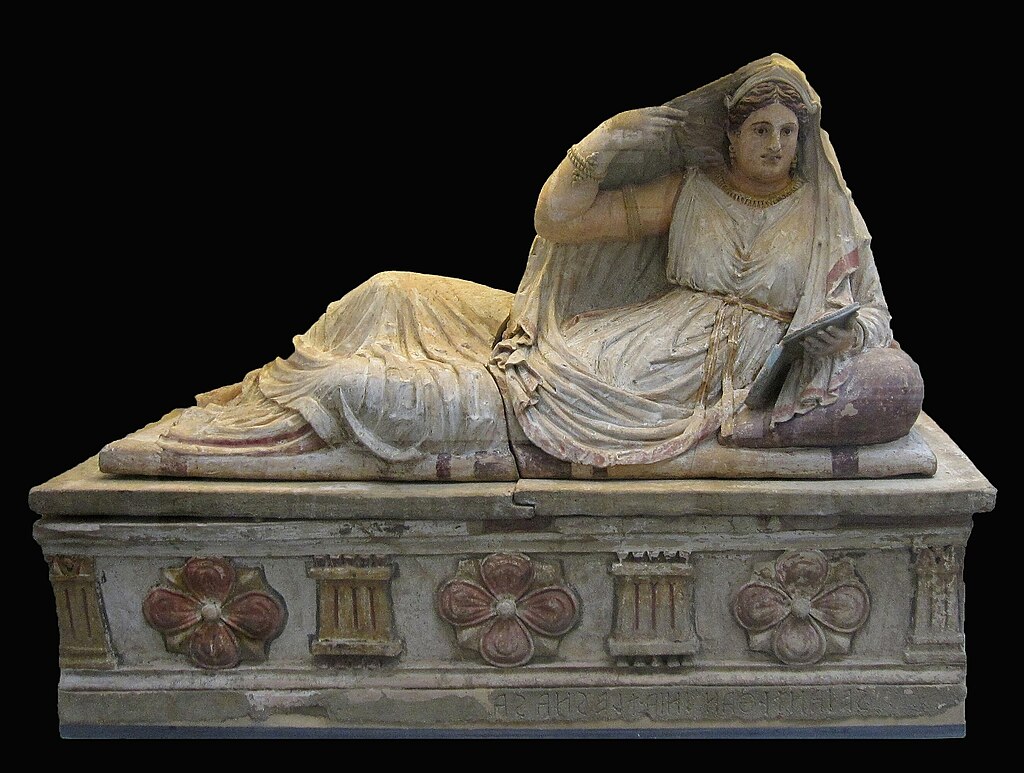 The Sarcophagus of Seianti Hanunia Tlesnasa is the life-size sarcophagus of an Etruscan noblewoman dating from 150 BC and is a masterpiece of Etruscan artwork. The deceased woman’s name is inscribed in Etruscan along the base of the chest.

She was part of a wealthy aristocratic family and is dressed sumptuously, wearing an ornate gown and cloak, with drapery over her body and adorned with a tiara, earrings, bracelets and a necklace.

Seianti is depicted as a mature woman, who is adjusting her veil to show her body. She leans against a pillow and holds a mirror in her other hand, gazing into the distance.

This brightly painted Etruscan sarcophagus was discovered in 1886 with the contents of a skeleton and some grave belongings.

Scientific analysis of the bones and teeth indicated that Seianti probably died at about 50–55 years of age. The idealized face of the deceased woman depicted on the sarcophagus was typical of Etruscan art at the time.

A sarcophagus is a box-like funeral receptacle for a corpse and was usually created to be displayed above the ground.

The word sarcophagus is derived from a combination of Greek words that mean “flesh-eating stone.”

The Etruscan civilization is the name given to a powerful and wealthy culture from ancient Italy in the area corresponding roughly to Tuscany, western Umbria, and northern Lazio.

Distinguished by its unique language, this civilization endured from before the time of the earliest Etruscan inscriptions (c. 700 BC) until its assimilation into the Roman Republic, beginning in the late 4th century BC.

In the 7th century BC, the early Etruscan culture was influenced by Ancient Greek culture. Archaic Greek culture significantly influenced their art and architecture, and Greek mythology was familiar to them.

In their heyday, the Etruscan elite grew rich through trade with the Celtic world to the north and the Greek settlers to the south and filled their large family tombs with imported luxuries.

Collections of the British Museum